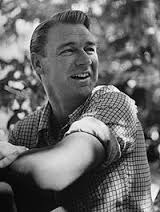 He first rose to stardom as "The Shirtless GI" in "So Proudly We Hail!" He was trumpeted as "The Male Sensation of 1944!" and Paramount studios called him their "Reigning Pin-up King". So great was his potential that a film distributors poll pegged him as a super star in the making.

Ladies and gentlemen, I give you...Sonny Tufts!?

Yes, as every dedicated Junk Cinema lover knows, Sonny Tufts was one of the most hilariously inept actors ever to stumble across the silver screen.

Born into a wealthy, socially prominent family (his ancestors founded Tufts University), Sonny could have led a comfortable life in business or banking, but fate had other plans in store. After graduating from Yale and studying voice at The Metropolitan Opera, Sonny was spotted in the chorus of the musical "Sing for your Supper" and whisked off to Hollywood for a screen test.

During the hey-day of the star system, studios regularly signed up unknown performers with the hope that 1 in 1,000 had the makings of a real star. These hopefuls were often obliged to change their names, alter their appearance and under go singing, dancing and acting classes before making their debuts. Sonny was one of the recipients of this strategy. Standing 6 feet, 4 inches tall with blond hair and blue eyes, Sonny appeared to have all the necessary attributes for screen stardom--except the ability to act. This was abundantly clear when studio executives reviewing his screen test thought he was doing a comedy bit, not a dramatic reading. However, as WWII had depleted the ranks of young leading men, Paramount signed Sonny up and a Junk Cinema legend was born. 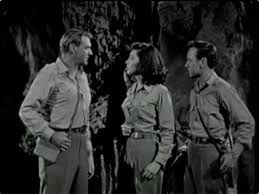 Sonny Tufts (left) and co-stars bicker over directions in "Cat Women Of The Moon."

Among the more notable flops in Sonny's impressive string of cinematic stinkers is 1953's "Cat Women on the Moon". An early 3D hoot-fest, Sonny plays the head of an expeditionary force sent to the dark side of the moon. It's there his crew run afoul of the fabled Cat Women (played by "The Hollywood Cover Girls"), who look like Lily Munster and dress like Martha Graham. Although the Cat Women exert mind control over lone female crew member (and Sonny's love interest) Marie Windsor, the guys manage to foil their plans to take over the Earth.

By the mid-1950's Sonny's once promising career had tanked. However, he still held out the hope of a comeback. In 1959, he launched a very public campaign to join the cast of John Wayne's "The Alamo", declaring, "I'm crusading for the role of Jim Bowie in 'The Alamo' the way Frank Sinatra fought for Maggio in 'From Here to Eternity'". He was not hired.

If Sonny's acting was often bland and colorless, his private life was anything but. In 1951, he entered a messy divorce, with Mrs. Tufts accusing Sonny of rampant drinking and wasting money. Most notoriously, a stripper named Melody Carol sued Sonny for $250,000 in 1953 for taking a bite out of her thigh. They settled out of court for $600.

Sonny's last screen appearance was in 1968's "Cottonpickin' Chickenpickers", a hillbilly musical which saw "The Male Sensation of 1944!" cast as "Cousin Ernie". The part, needless to say, was not Academy Award material, although it did give Sonny a chance to show off his impressive burping skills.

While Sonny's film career was relegated to reruns on the late, late, late show, bad film fanatics took him to their collective hearts and have labored tirelessly to keep his legacy alive. Johnny Carson regularly used Sonny as a running gag in his "Tonight Show" sketches and The Golden Turkey Awards dedicated a whole chapter ("The Worst Performance by Sonny Tufts") to his unique accomplishments as a Junk Cinema icon. And Sonny was also known as Bullwinkle J. Moose's favorite actor; one of his most prized possessions was a signed picture of Sonny Tufts, which Boris Badenov stole. 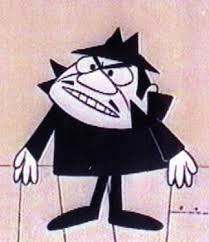 Email ThisBlogThis!Share to TwitterShare to FacebookShare to Pinterest
Labels: "Cat Women of the Moon", "The Male Sensation of 1944", Golden Turkey Award nominee, Sonny Tufts, worst actor of all time