"Bluebeard": The Beast of (Richard) Burton 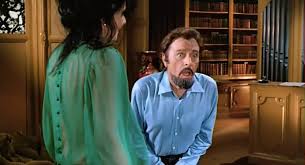 Richard Burton gets a well deserved kick-in-the-crotch from one of his many ill-fated wives in 1972's "Bluebeard."

Richard Burton is one of my favorite actors. Handsome, talented and charismatic, he also possessed one of the greatest speaking voices EVER. Unfortunately, Burton's considerable gifts did not prevent him from making bad movies. A lot of bad movies. Tons of bad movies. In fact, throughout his long career, Richard (alone or with his primary cuddlemate, Elizabeth Taylor) stuffed enough turkeys to give the Butterball people a run for their money.

"The Robe", "Staircase", "The Sandpiper", "The VIPs", "Boom!", "Dr. Faustus", "The Wild Geese", "The Exorcist Part II: The Heretic", "The Assassination of Trotsky", "A Circle of Two" and "Candy" are just a few of the messterpieces Burton appeared in. But of all his Golden Gobblers, "Bluebeard" from 1972 may be his tour de worst.

Richard is Baron Kurt, an aristocratic WWI flying ace with a tell-tale blue-tinted beard. Although he is virile and courtly, the Baron has a rough time in the marriage department. Getting married is not his problem; keeping his wives alive is. In fact, "Bluebeard" begins with Kurt marrying a sweet young thing named Greta (Karin Schubert), only to have her kick the bucket in a boar hunt a short time later.

Never one for prolonged mourning periods, Burton is out trolling for his next catch when he meets showgirl Anne (Joey Heatherton). Over the years, Richard has shared the silver screen with a number of leading ladies of dubious talent (Joan Collins, Linda Blair and Tatum O'Neal spring to mind). Yet Heatherton earns the (dis)honor of being his worst co-star ever. No matter how hard Joey tries, the poor girl just can't act. Now, to be fair, all of "Bluebeard"s female stars suffer from this malady in one form or another--but Joey is especially afflicted. She appears to have only one facial expression. Her reaction to any frightening situation is to bug her eyes. Judging from the bored look on Burton's face during their scenes, he must have felt he was acting opposite a crash test dummy.

However, talent-deficient stars are not "Bluebeard"s only problem. Although the flick is supposedly set in Europe between the World Wars, people sport shag hair-dos, Afros, mini skirts and leisure suits. Baron Kurt belongs to some kind of Fascist/Nazi party, but it's never made clear if this is meant to be a send-up of or a comment on the real Nazi party's rise to power. Likewise, the movie can't decide if it's a horror film, a black comedy, a satire or a skin flick (the film's backers reportedly insisted on plenty of female nudity and the gals certainly weren't shy about shedding their clothes. The men, naturally, remained covered up at all times.) 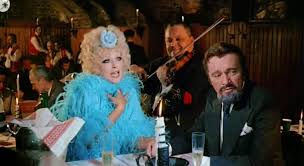 Back to the movie. Anne and Kurt meet and marry rather quickly and settle on the family's palatial estate. The only problem is, well, hubby always has something to do or somewhere to go when wifey makes overtures about having sex. Later, Joey stumbles upon a wizened old maid brushing the hair of Burton's mummified mother and suffers from a "nervous collapse", which, naturally, further delays any conjugal relations between the newlyweds. After days stretch into weeks and then months and husband and wife have yet to do The Deed, Anne begins to wonder what the hold-up is.

Of course, what she doesn't know, but the audience quickly guesses, is that Baron Burton is impotent-- and without the miracle of Viagra, he'll never be able to do his husbandly duty. The flick oh-so-subtlety suggests that there might be something wrong with Kurt down there, but they don't explain what. Nevertheless, this quirk has doomed all of his marriages, so Richard believed had no choice but to off his wives before his impotence became public knowledge or the gals blabbed--although sadistic jerk that he is, Richard has convinced himself that the wives were to blame for everything.

Eventually Anne wises up, but only after she unlocks the hidden freezer containing all of hubby's ex-wives with the special gold key she was ordered to never, ever use. Fit to be tied, Burton announces he must now kill Heatherton. In order to stall him, Joey serves Richard that classic American delicacy Jello and gets him to explain why and how he did his other brides in.

They say the definition of insanity is doing the same thing over and over again and expecting a different outcome each time. If this is true, then Baron Burton is truly off his rocker: he meets, pursues, marries and quickly becomes disenchanted with each new wife in record time. Then he kills her. Although each wife sins in a different manner, the punishment Burton gives out is always the same: death.

Afro-wearing Virna Lisi kept singing dumb songs over and over again, so Kurt chops her head off with a guillotine. Nathalie Delon takes stripping lessons from hooker Sybil Danning to entice Burton, but finds she enjoys making it with Danning even more. When hubby finds the girls post-coital, he impales them with the help of a pointy chandelier centerpiece (note obvious phallic symbol). Feminist Marilou Tolo gets batty when she drinks cheap red wine. So after she drunkenly kicks Burton in the crotch, he drowns her in a vat of (yes) cheap red wine. Karin Schubert knits up a storm while she waits for hubby to consummate their marriage. After she wails, "I"m tired of being an deflowered wife!" just one too many times, Richard guns her down in a boar hunt. Last, but certainly not least, former nun Raquel Welch(!) insists on naming every man she's slept with. As you can expect, it's quite a long list and Richard, running out of patience, coolly locks her in a coffin.

These flashbacks lead to a climatic (no pun intended) Burton/Heatherton showdown, where Joey screeches at Burton,"You're a monster! Let me get this off my chest so I can die happy!(Pause) I spit on you, darling!" No slouch in the scenery chewing department himself, Burton pronounces, "I shall feed you to my dogs!"--an interesting turn of phrase, since this entire production is a dog from snout to tail.

While watching a film of such abysmal quality, you begin to wonder why an actor of Burton's stature would want anything to do with it. However big his paycheck was, it couldn't possibly compensate for the damage a movie like "Bluebeard" could inflict on his career.

And "Bluebeard" was a mega-ton bomb for Richard Burton, earning him some of the worst reviews he would ever receive. The Washington Post felt his campy, sub-par performance meant Richard was "announcing his availability for Vincent Price roles." The critic added, "Unless he's contemplating a permanent career in exploitation movies, it would be difficult to sink below this credit." Meanwhile, the critic for Cue magazine hoped "Bluebeard" "remains the worst picture of (Burton's) career." Fat chance! Other Burton bombs would include "The Medusa Touch", "Hammersmith Is Out", "Massacre in Rome", "The Voyage" and "The Klansman." Then he would go on and star as Tatum O'Neal's love interest in "A Circle of Two"! Just when you think Richard couldn't go any lower, he does.

And just how low Richard Burton had sunk became even more apparent when The Golden Turkey Awards gave him their Lifetime Achievement Award as Worst Actor of All Time, besting such worthy contenders as John Agar (Shirley Temple's ex-husband and star of "The Mole People"), Tony Curtis and Victor Mature.

"Anyone can make a bad film when working with hack directors and inane scripts," the Brothers Medved pointed out. "But it takes a true genius like Burton to come up with garbage when teamed with serious artists." 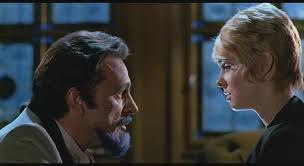 "Made you blink!": Richard Burton and Joey Heatherton engage in a high-stakes staring contest in "Bluebeard."

You have to admit, they have a point.

Thus, we close this post with a heavy heart. Richard Burton, a truly talented actor, became the thinking person's Sonny Tufts. And wherever Sonny Tufts is, he's probably beaming with pride.

Richard Burton is probably kicking himself in the shins.