If You Think Your Life Sucks, Then Please Watch...

A fine hello to you and yours, movie lovers!

Boy, the world sure is in a mess, isn't it? They shut down the government over health care. Health care! The world may run out of water in 17 years. The price of stamps is going up. And Jennifer Aniston may be pregnant/adopting/using IVF/hiring a surrogate to have a baby/twins/triplets before Angelina pops another one out--all to spite Brad, of course.

What's that? Your life isn't going much better, either? I sympathize. But please remember this: even if your life is down in the dumps, someone, somewhere has it much, much worse. Don't believe me? Then please partake of this blog's semi-regular feature "If You Think Your Life Sucks, Then Please Watch..." 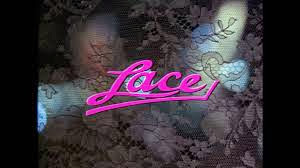 The formula was simple: take a best selling book, the trashier the better; shoot it in "exotic locales"; lure respectable actors with fat paychecks to slum it as "guest stars"; hype the dickens out of the thing; then sit back and watch the ratings (and the cash) roll in.

"Lace" not only followed that formula, it went one better: the producers hired former teen model Phoebe Cates in the role of Lili, a controversial movie star/sex pot out to find the birth mother she blames for her rotten childhood.

The performance Cates gives in this two-part sudser is the stuff of Junk Cinema legend. As Lili, Phoebe bugs her eyes, flares her nostrils, tosses her head, unsheathes her claws, bares her fangs, shrieks like a dental drill and stomps around like she's trying to extinguish a camp fire. She does everything but act which, of course, is beyond her capabilities. Cates' co-stars, meanwhile, are rendered mute as Hurricane Phoebe not only blows them off the screen, but into the middle of next week. Not until Elizabeth Berkley fatally hammed it up in "Showgirls" would a young actress display the bravura badness Cates does in "Lace".

The Girls Most Likely To... 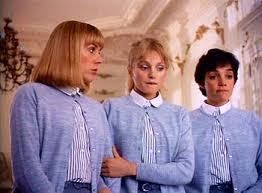 Our saga begins in one of those fancy, exclusive European boarding schools where the "teenage" student body is made up of actresses moments away from experiencing a mid-life crisis. In this case, the guilty parties are Judy (Bess Armstrong), Pagan (Brooke Adams), who is suppose to be British, and Maxine (Arielle Dombasle) who is (oui, oui)  French. The girls each lose their virginity around the same time, which is against the school rules. Then one of the trio gets a bun in the oven--we are never told who--and to prevent being expelled, the girls blackmail the snooty principal (Herbert Lom). After graduating, the pregnant gal secretly gives birth to a baby girl. The tot is placed in foster care and the friends vow that the first one to get her life in order will collect the child.

Of course, this being a glamorous soap-opera, things don't quite work out as the gal-pals planned.

As the girls each start to make their way in the world and begin having affairs (with the wrong men, of course), they find endless excuses for not retrieving the child. Then they hear that the little girl has died. After mourning her passing, the friends resume their careers (becoming a publisher, architectural restorer and charity fundraiser, respectively) and having more affairs.

I'll Make Them An Offer They Can't Refuse 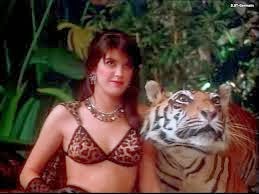 Even though she's supposedly a big time movie star/sex symbol, Lili isn't happy. She's still smarting over her mother abandoning her. So Lili hires a private investigator and learns the names of Judy, Pagan and Maxine. She also visits Maxine's Aunt Hortense (Angela Landsbury) to gather extra info on which one of the friends her mom might be. Deciding that all three are equally responsible for her rotten childhood, Lili vows revenge. "They sent me to hell!" Cates screams. "I'll teach them what I learned there!"

Like an evil little troll, Lili lures her prospective moms to her penthouse by A) allowing her next movie premiere to serve as a benefit for Pagan's cancer charity B) offering Judy an exclusive interview  for her magazine and C) promising to break it off with Maxine's son, who Lili has wantonly seduced. The three friends arrive for their appointments and when Lili emerges (in a lacy robe) to greet her guests, Cates utters the words that are destined to be her epitaph: "Incidentally, which one of you bitches is my mother?"

When neither Pagan, Maxine or Judy will fess up, Lili goes ballistic. What's more, she knows the reason why her birth mother won't come forward: it's not because she's illegitimate, it's because of her shameful reputation as an easy sexpot.

After tearing each of the friends a new one, Lili orders them out of her penthouse. "None of you are good enough to be my mother!" she shrieks.

Consumed by guilt, Lili's real mother finally declares herself. It's publisher Judy, the drabbest of the group. As the exit music swells, mother and daughter embrace. All is forgiven...until the sequel, where Lili goes on the hunt for her father. 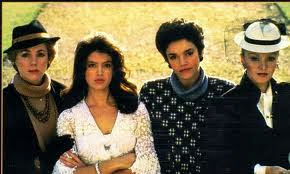 Why so mad? The cast of "Lace" stare down their critics (including me).


Phoebe Cates' titanic badness in "Lace" is without question the mini-series' main draw. But this sudsy saga has other lame brained charms worth savoring. First, there are the mysterious "accents" flaunted by Adams (who was suppose to be British) and Cates (who was suppose to be "European"). The actresses tend to slip in and out of them at will--one minute they are trying to sound like Deborah Kerr, the next they sound like Paris Hilton. Next, there is the over-the-top looks the gals sport: big hair, killer blush, shoulder pads that give their suits and gowns the wing span of a 747. Why was any of this ever considered fashionable? Finally, there is the smoking. Would one of the world's leading fundraisers for cancer research puff away like Pagan does? Or does she believe that cigarettes are no more dangerous (and addictive) than Twinkies?

So you see, movie lovers, your life is not so bad. You may not be rich or famous, but at least there isn't a visual record of your horrible acting floating around YouTube. And hopefully you'd have enough sense not to call your mother (whom you've just met) "a bitch"--at least until you got to know her. And I bet you haven't touched a shoulder pad in years.