It Never Waynes, But It Bores: "The Conqueror"!

John Wayne as Temujin, Pedro Armendariz as his "blood brother" Jamuga and a feathered friend prepare for battle in "The Conqueror"

Are you hankering for an epic love story? One of those Golden Age of Hollywood romances where the opposites-attract-couple bicker and banter their way to true love? If so, have I--and Junk Cinema--got a movie for you!

He's a Mongol warrior, the fastest sword in the east. She's a Tartar princess, the promised bride of a Merkit chieftain. He attacks her caravan. She insults his manhood. He rips off her dress. She tries to stab him. What else could they do but fall in love? Meet that wacky fun couple, Temujin and Princess Bortai, played by John "Duke" Wayne and Susan Hayward in 1956's "The Conqueror".

Yes, this Dick Powell produced and directed (under the watchful eye of Howard Hughes) costume drama/epic/biopic/horse-opera/hootfest has been amazing bad film fanatics for 57 years and counting. With a supremely miscast Duke Wayne in the title role, an uproarious script by Oscar Millard, TV's William Conrad at his slimmest, a shirtless Lee Van Cleef doing a jig, Utah standing in for the Gobi Desert, more horses keeling over than you can shake a stick at, a dancing bear--at one hour and 46 minutes, "The Conqueror" has it all.

Let's All Play The Family Feud!

The fun begins when Temujin (Wayne) and his "blood brother" Jamuga (Pedro Armendariz) decide to attack the caravan of Merkit chieftain Targutai (Leslie Bradley) and his fiance Tartar Princess Bortai (Hayward). After the required fighting and running around, Temujin is declared the winner. He sends the hapless Targutai packing and then rips off Bortai's slinky white dress. This sets the tone for the film's central relationship, with Wayne making sexual threats, Hayward giving him lip back and then one or the other stalking off in a huff.

For some unexplained reason, Temujin is sooooo crazy over Bortai that he's oblivious to the fact that everyone else is about as happy as Dick Cheney at an ACLU fundraiser. See, Bortai's dad Kumlek killed Temujin's pop Yesugai. Hunlun, Temujin's ma (Agnes Moorehead) still nurses a grudge over this and calls Bortai "the spawn of evil!!" In fact, Aggie is so horrified by her son's choice for a "wife" that she refuses to welcome her into her home. "I will not have her with in our tents!" the outraged mother-in-law screams.

Meanwhile, Bortai lets Temujin know in no uncertain terms that she's NOT interested in being his cuddlemate: "Is Temujin so wanting for a woman that he will quench his fire with ice?!" she sneers. Shocked that Bortai doesn't think he's cute, Temujin roars back, "You had no love for Targutai! This I'd swear!" And speaking of Targutai: he's so up in arms that Temujin stole his gal, he launches a raid to reclaim his wife that ends in his death.

Whew! Where is Dr. Phil when you need him?

"I Don't Know How To Love Him" 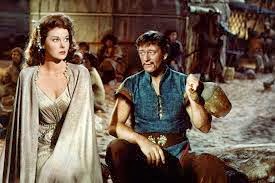 May I Offer You A Drink? Temujin and Bortai's romance gets off to a rocky start.

Perhaps the most infamous aspect of "The Conqueror" is the love/hate relationship between Temujin and Bortai. Even taking into account the numerous social changes that have taken place since this flick was first made, "The Conqueror" remains a very sexist film. Some fans have compared it to "The Taming of The Shrew", but not even Petruchio was as bad to Katherine as Temujin is to Bortai.

For example, when Bortai is ordered to dance at the Mongol's evening campfire, she hisses, "I do not dance for jackals." An angry Temujin then drags her into his tent demanding, "For Temujin you will dance!" When Bortai is less than enthused while Temujin kisses her, the Duke snarls, "I stole you. I will keep you. Before the sun sets, you will come willingly into my arms!"

During one of "The Conqueror"s many battle scenes, Temujin squeezes himself and Bortai into a rocky crevice to hide. After the troops pass, he gives his captive a nasty leer and then rapes her. Even more nasty, after initially fighting back, Bortain gives in! Later on, Temujin informs Bortai, "You will find more ease this night than the last." Clearly hating herself after their most recent close encounter, Hayward snaps, "For me there is no ease while you live, Mongol."

But you ain't heard nothin' yet!

On a road trip to visit Wang Khan (Thomas Gomez), the Mongols stop for the night. When Temujin tells Bortai she'll be sharing his tent, the princess huffs, "I'll sleep outside!" She demands her furs (part of her dowry, by the way), but Wayne stops her. "You'll have no further need for furs," he drawls. Then be brags, "By night, my warmth. And for adornment by day, I will heap precious stones on you." At the end of her royal rope, a furious Bortai grabs Temujin's sword and tries to chop his head off. A bemused Temujin merely gathers Bortai up in his arms and declares, "You're beautiful in your wrath!"

Eventually Bortai does submit to Temujin's grubby advances. It goes like this: her father Kumlek captures Wayne, roughs him up and seeing Temujin in such bad shape melts Bortai's tough Tartar heart. "To reach his arms I will betray my people into Mongol bondage!" she cries. This is quite a turn around indeed, considering only a few scenes earlier Bortai had informed Duke Temujin that "the vultures will have feasted on (his) heart" before she willingly shared a sleeping bag with him (Wayne slapped her in response, by the way). Confiding this development to blood brother Jamuga, Bortai blathers, "I know only that, all of a sudden, my hatred for him could not withstand my love!" Nodding his agreement Jamuga replies, "He has a quality of spirit that commands love (?) and makes men greater than themselves..."

Oh, come on! Gandhi has a spirit that "commanded" love! Temujin kidnaps another man's wife, slaps her around, punches out a Mongol conscript who dares to complain and has two guards hung for sleeping on the job! Like his treatment of women, Temujin's motivational skills are primitive, to say the least.


Thanks For Your Support 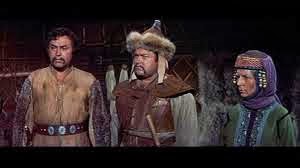 For starters there is Agnes Moorehead as Hunlun, Temujin's all-knowing Mongol mom. Dressed in an outfit that shows only her face, Hunlun looks as if she was weaned on sour pickles. She also relentlessly wrings her hands and knits her brows over her headstrong son's ways.

"My son has won the world," she bitterly complains at one point. "Still he must conqueror that red-headed Jezebel!"

As Temujin's kid brother Kasar, William Conrad of "Cannon" and "Jake and the Fat Man" fame wears baggy pants, a leather vest and a fur cap on his head. Believe it or not, this is a slimming look for him. As high spirited as his sibling, Kasar enjoys tossing people into the water, bending bars and participating in violent raids. Never the less, he suffers the indignity of getting stuck in a window trying to escape the Khan's castle and is stabbed in the back.

However, for my money, Thomas Gomez as Wang Khan and John Hoyt as his shifty Shaman nearly steal the show. The rotund Gomez--who we see taking a bubble bath!--is draped in an enormous caftan, has long braids, a droopy mustache (of course) and an endless collection of pointy hats Lady Gaga would die for. Shaman Hoyt, meanwhile, has deeply slanted eyes, a long pointed nose, and a stringy 'stache. Not only can he divine the future from reading the boiled shoulder blade of a sheep, he gets to deliver great lines like "The rising sun never finds the servant of the heaven's sleeping" when Duke Wayne catches him up at the crack of dawn.


One cannot over look Wang Khan's company of dancing girls, either. They perform no less than than four numbers with a variety of props including scarves, swords and garlands of flowers. The principal soloist of this dance company is a gal gussied up to look like an X-rated candy cane and has Swifer Dusters attached to her Lee Press-One Nails. She belongs to a tribe where the women are so terrific "in the arts of love" that other females are like "the second pressing of the grape" according Temujin (who is apparently in a position to know). 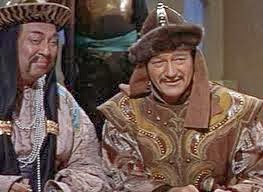 The End Of The Beginning


The interlude at Wang Khan's palace, colorful as it is, can't prevent the inevitable cage match between Kumlek and Temujin that leads to "The Conqueror"s stirring conclusion. The night before, Temujin climbs a hill and pleads, "Eternal skies! Send me men!" The men duly appear, along with their horses, and the whole mash-up reminds one of the classic Monty Python sketch of the women's guild re-enacting the battle of Pearl Harbor. Temujin emerges victorious, becomes the boss of everything and earns the new title Genghis Khan or "Perfect Warrior". Even more important, Temujin has won the undying love of Bortai "and from their loins sprang a race of conquerors."

A very sad post-script ends this tale. "The Conqueror" was shot near a nuclear testing range, exposing the cast and crew to harmful levels of radiation. In the end, Wayne, Hayward, Moorehead, Armendariz, director Powell and others either contracted or died from cancer.

While it is true that the creation of great art demands great sacrifices, the price paid by the cast and crew of "The Conqueror" was far too high.

I leave you now with these words of wisdom spoken by the great Khan himself: "I am Temujin! Barbarian! I fight! I love! I conqueror...like a barbarian!"

Until next time, save the movies.