"Laserblast" or Did I Really Watch This Movie?

OK, here's the deal: I wasn't feeling too well, so I decided to watch a movie. It was called "Laserblast" from 1978. It's about this kid named Billy (Kim Milford), who has Shaun Cassidy hair and never buttons his shirt front. His mom, who dresses like a stewardess, decides to fly off to Acapulco, leaving her son alone. Feeling blue, Billy hops into his van and drives over to see his Jan Brady-ish cuddlemate, Kathy (Cheryl Smith). Unfortunately, her deranged grandpa (Keenan Wynn!) runs the poor kid off. Then a pair of dope smoking cops pull Billy over for speeding and hand him a ticket. Billy complains that the ticket will up his insurance rates even more.

Still with me? Good. Billy next pulls into an ARCO station for a fill-up and some so-dee-pop. After wrestling with the Coke machine, he's harassed by two nerds named Chuck (Mike Bobenko) and Froggy (Eddie Deezen). Fed up, Billy drives off into the desert and discovers what appears to be an alien leaf-blower or some such thing. Our protagonist just has the best time shooting the thing off...

No, stop. Before the movie really begins there is this prologue/dream sequence where a guy with green skin and bad hair wanders around in the desert. Then these cute stop-motion aliens, who resemble the Geico gecko, show up. They mumble some gibberish and have a rather wimpy flash-fight with the chap with green skin. In fact, they disintegrate the fellow. Then an airplane flies over head, which scares the aliens off, and they leave without grabbing either the green guy's leaf-blower or this amulet-thingy.

Now, remember those aliens? Well, I'm going to call them Bob and Ray just for fun. Anyway, they are contacted by their boss who tears them a new one for leaving the leaf-blower and the amulet behind.

"Idiots!" I can imagine the boss alien shrieking in his alien gibberish. "What do I pay you people for?! Get back down to Earth and find that leaf-blower or it's the Slime Pits for both of you! Do you understand?!!"

A clearly chastised Bob and Ray do as ordered. 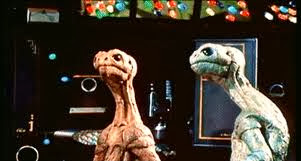 Aliens Bob and Ray receive a bad performance review and return to Earth to make good.

Meanwhile, a federal agent (or some such person) with plastic hair and a no-nonsense attitude named Tony Craig (Gianni Smith) arrives on the scene. He orders the Sean Hannity-ish sheriff to seal off the town and orders a news blackout. He clearly knows something, but he's not telling. Then Kathy notices Billy has a chest wound and insists he see a doctor.

Billy's mom, still partying in Acapulco, must have GREAT health insurance because Billy is ushered in to see Dr. Roddy McDowell in no time flat AND without a co-pay! So what is Roddy, the star of "How Green Was My Valley", "Cleopatra", all those "Planet Of The Apes" movies and many other flicks of note, doing in this movie? I have no idea. Roddy extracts some metal from Billy's chest, which he asks a friend to analyze. While driving over with the sample, Roddy is laser blasted into kingdom come. His total screen time is 15 minutes, tops.

Who killed Roddy? It was Billy! Why? Because that alien leaf-blower he is toting around MAKES HIM EVIL. It also turns him into a green-skinned freak with bad teeth. And the catch? Billy HAS NO MEMORY OF HIS EVIL LASER BLASTING DEEDS!

Because "Laserblast" is a mercifully short film, Billy doesn't waste a lot of time using his alien leaf-blower to blast the stuffing out of various people and their cars. When the end nears, Billy--green skin, bad teeth, looking wild-eyed--staggers into town causing endless mayhem. Loyal cuddlemate Kath, with Agent Craig in tow, cries out to him. Suddenly Bob and Ray reappear and zap Billy with rays from their spaceship, creating quite a pot-hole in the process. Their target toast, the aliens zoom away. Kathy rushes to embrace her boyfriend's corpse and our feature film concludes.

First, what the hell was this movie about? Was it a revenge drama? A cautionary tale? A sci-fi thriller? A teenage reworking of "Dr. Jeckle and Mr. Hyde" with a bit of "Carrie" thrown in? Or did the producers just throw a bunch of plot points in a blender, punch "puree" and then toss the whole mess up on screen hoping something would stick?

Second, who is Billy? Does he attend high school? Community college? Work part-time at Walmart? A kid with hair like his is never going to never going to be believable as a nerd--especially when Eddie Deezen in the cast. Yes, he's having a string of bad luck, but Billy is far from being a bullied loser shoved into one too many lockers who finally snaps.

Third, the opening sequence. Did Billy actually dream this series of events--which would explain his being jolted out of his sleep--or was it meant to serve as foreshadowing? The green skinned alien was clearly not Billy, so were the opening scenes meant to stand alone? And just who, exactly, was that alien? What did he do? How did he arrive on Earth? Why were aliens Bob and Ray after him? Did the leaf-blower make him evil or was he already evil to begin with? The film never tells us. And if the green skinned alien wasn't meant to be significant to the plot, why include him at all?

Fourth, the aliens. Bob and Ray are cute, if deadly, and the best part of the flick. I'm a fan of stop-motion and "claymation", so the aliens had my attention. But what was their story? Were they police officers, bounty hunters or free-lancers? They clearly had a mission, but was it? Why were the leaf-blower and the amulet so important that they could not to be left behind? If the leaf-blower made its operators evil, then Bob and Ray, trying to keep it out of the wrong hands, might have been the film's heroes. However, because the filmmaker clearly kept all this information to himself, we'll never know.

Furthermore, Bob and Ray were such scene stealer's, why weren't they the movie's stars? They acted circles around the humans and were much, much cuter.

I did a little research on "Laserblast" and found out, not surprisingly, that the flick is considered one of the worst ever made. However, movie critic Leonard Maltin gave the flick two-and-a-half stars in his review. I don't think he saw the same movie I did. Perhaps the best comment read about "Laserblast" came from a gentleman who took issue with the film's advertising poster: he claimed the illustration made leading man Kim Milford "look like Mark Hamil possessed by Gary Busey." He makes a good point.

Still, I can't quite believe I really watched this flick. Bad movies are my stock-in-trade, but this one was beyond the pale. I don't know if it was the shoddy cinematography, the shoddy acting, the shoddy script, the ugly clothes, Eddie Deezen as a bully or the total waste of a pair of cute stop-motion aliens, but "Laserblast" was like every gym class I was ever subjected to: I survived, but what else could I do? Perhaps when I feel better, I may revisit the flick and give it a second chance. After all, any film that features two stop-motion aliens wearing tube socks and packing heat can't be all bad.

Until next time movie lovers, save the movies! And get your flu shot!