Mutiny On The High C's 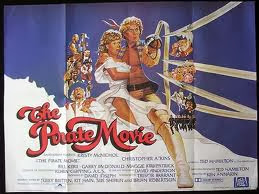 Is this suppose to be funny...or symbolic?

"The Pirates of Penzance" is a delightful Gilbert and Sullivan comic operetta about a gang of bumbling pirates, a modern major general and his virtuous daughters.

"The Pirate Movie" is a listing, smelly garbage barge about two teens who travel back into time (via a sadly un-fatal blow to the head) to find lost treasure, battle pirates and dance with ugly animated fish.

"The Pirates of Penzance" has had its lead roles sung by the finest voices around, including (in more recent times) Kevin Kline and Linda Ronstadt.

"The Pirate Movie", on the other hand, relies on the golden throats of teen wet dream Christopher Atkins and TV actress Kristy McNichol (best remembered for the drama "Family").

After a hugely successful production staged first in Central Park and later relocated to Broadway, "The Pirates of Penzance" was made into a film in 1983.

"The Pirate Movie" was made to cash in on "Penzance"s popularity, clearly hoping to drain the pockets of gullible teen fans who A) would easily confuse the two productions and B) hope that dyed-and-permed within an inch of his life Atkins would appear in another skimpy loin cloth, such as he did in "The Blue Lagoon".

Guess which flick is going to be made to walk the plank, kiddies?

"The Pirate Movie" is yet another example of the insane idea of making a movie musical without any musical talent. "Lost Horizon", "At Long Last Love", "Paint Your Wagon", "Can't Stop The Music" and "From Justin To Kelly" are a few more entries into this unique sub-genre. "The Pirate Movie", however, goes one better by not only featuring actors who can't act, singers who can't sing and dancer's who can't dance: it also adds ugly costumes, plenty of limp penis jokes, bad '80's hair, horrible animation, dreck-y songs AND shameless product placement into the mix. The final result is a noxious mutiny on the high Cs.

How bad is "The Pirate Movie"? To paraphrase Hedda Hopper, while watching this flick I envied my feet--they were asleep (rim shot). 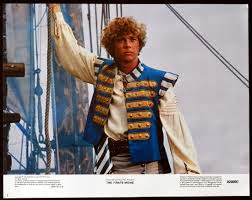 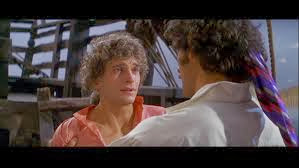 
Our saga begins in 1982 Australia, where something called "Pirate Days" is being celebrated. Strutting onto the scene are a group of bikini-clad girls, trailed by the uber-geek Mabel (McNichol). It's never made clear if these swim-suited gals are sisters, friends or strippers--and what Mabel's connection to them is. However, because Kristy is toting a boom-box the size of a flat-screen TV, I vote for strippers, which makes McNichol their sound person.

Anyway, these ladies crowd around Christopher Atkins, who gives fencing demonstrations. The hapless Mabel is pushed up to mock-fight with Chris and, when she hits him, she cries out "Ole'!".

These are the jokes.

Later, Chris invites Mabel and the strippers to go sailing with him. Unfortunately, the strippers send Mabel off to (product placement!) McDonald's and promptly ditch her. Plucky Mabel, however, hires a small boat to scuttle after them. She hits a spot of bad weather or high waves or something and not only falls over board, but gets bonked on the head--alas, not fatally. 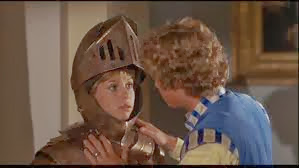 That smack on the skull sends Mabel back to (yo ho ho and a bottle of rum!) pirate days. We are also introduced to pirate apprentice Frederick (Atkins), who decides to ditch the pirate life and chase girls. Lucky for him, a gaggle of sisters are frolicking on a near-by beach. In a parody of "Jaws", Atkins steams after them, but they all run away--except for Mabel (Kristy) who is now duded up to be the hip one. The two teens meet, fall instantly in love and warble the truly awful ballad called "First Love."

Fred and Mabel decide to marry ("Boy! That was a fast love scene!" McNichol mugs to the camera), but there are several problems. See, the local custom states that the oldest daughter in a family must marry first--and poor Mabel is the youngest in her clan. Then there is Fredrick's pirate past. "Pirates!" squeals Mabel. "You mean walking the plank? Buried treasure? Hack, slash, off with his head and the jolly Richard and everything?"

Remember, these are the jokes.

Seconds later, Fredrick's old pirate posse arrives. All hell breaks loose, but Mabel grabs a sword and sets out to defend herself and her sisters. This is merely an opportunity for some lame dick quips. For example, when Mabel warns the Pirate King (Ted Hamilton) "You'll be hung! You'll be hung!" He jauntily replies, "Oh, I am! I am! And very well, thank you!" When the Pirate King chides Mabel for not being able to aim high enough to pierce his heart, she parries back "I wasn't aiming for your heart." See what I mean?

Now, all of this might might seem light-hearted and funny if A) it actually was light-hearted and funny and B) the performers were talented enough to carry it off. And sing. And dance. And had quality material to sing and dance to. "The Pirate Movie" has none of these. Worst of all, it has Christopher Atkins in the lead role. Cute as he is, Chris' talents were always painfully limited to what his ever present loin cloth covered up. Like most teen idols, his career was based on looks and hype and faded faster than a cheap spray tan. Of course, appearing in movies like this didn't help, either. 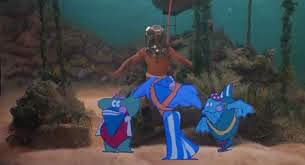 "May I have this dance?" Christopher Atkins attempts to frolic under the sea with some cheap animation.

Now, no review of "The Pirate Movie" would be complete without mentioning its wretched musical interludes. Which is the worst? That's hard to say, because there are so many of them. Should it be "First Love", where our stars warble "Some kind of miracle brought you here/Just when I had given up hoping./ From the moment when you first appeared/I could feel my whole life opening"? Or perhaps it's Chris "singing" the ditty "How Can I Live Without Her (When She's All I'm Living For)", in which the love-lorn Atkins winds up in a coffin? Maybe it should be the horrible reworking of "A Model Major General", where '80's cultural references are tossed in, the cast cavorts like spiders on a hot plate and poor Kristy McNichol sits on the grass and claps along (my guess is McNichol couldn't dance and thus sat this production number out)?

Actually, the "winner" belongs to a jaw-dropper called "Pumpin' and Blowin'". It goes like this: Hoping to win Mabel's hand by finding the treasure pirates stole from her daffy dad, Fred dons a skimpy loin cloth and a deep sea diving helmet. Meanwhile, Mabel (in a small boat) mans his air hose and harmonizes that in the name of love "you have to swallow more than water--it's your pride!" While all this is going on, Chris is under the sea "dancing" with cheaply animated and very ugly fish. It should be noted that Atkins' "dancing" is limited to shaking his shoulders, kicking up sand and waiving at ugly fish. At one point, Atkins' helmet even threatens to (ha, ha ha!) fill with water. Little wonder the esteemed Golden Raspberry Awards chose "Pumpin' and Blowin'" for its "Worst Song" basket of berries that year. 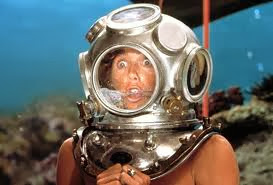 Between The Devil and The Deep Blue Sea: Mugging in flicks like "The Pirate Movie" helped Christopher Atkins' career sink to the bottom of the ocean, never to be heard from again.

Oh, yes, and about those double ententes that float around this movie like so much illegally dumped medical waste? I couldn't find an exact count, but I would say there are far too many of them. I don't have a problem with dirty jokes as long as they are funny. The jokes in "The Pirate Movie" are not funny. Take, for instance, this thigh-slapper: Chris arrives on the beach and announces himself to the unsuspecting sisters. They scream and run away, dropping their flowers. This causes Chris to exclaim, "Wait! I didn't mean to deflower you!" Later, Mabel will ask Fredrick, "Are you a virgin?" When he relies "I don't know", Mabel quips back, "Close enough!" Then there is the scene where Fred sets off in a boat to look for girls...while eating a very large banana.

The Aussies (who financed and filmed this flick) are known to have a ribald sense of humor, but this stuff would embarrass Benny Hill.