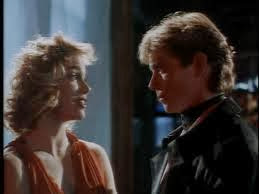 A hail and hardy hello to you and yours, movie lovers.

Say, are you in the mood for an atmospheric gothic romance? You know, the type of tale where a couple must vanquish incredible forces to be together? Where the setting is a remote, mysterious place full of secrets and lies? Where the cast of characters may not appear to be who they say they are?

If so, go read Jane Eyre or Wuthering Heights.

However, if you want to partake in a "gothic romance/chiller" that's an unintentional laugh riot with a large helping of cheese on the side, then, please, beg, borrow, steal or download "Dracula Rising"(1992) right now--but finish reading this article first, please. I mean, it's only good manners.

"Dracula Rising" comes courtesy of the Roger Corman Cinematic Assembly Line. Since the 1950's, Roger has been one of the most trusted names in Junk Cinema, providing bad movie lovers with outlandish tales of giant leeches, teenage cavemen, talking plants and psycho sorority girls on budgets smaller than Kim Kardashian's skirts. And "Dracula Rising" is no exception. In fact, it is pure Corman corn from start to finish, with all the tacky sets, cheap F/X, horrible music and acting that veers from basically competent to down right nutty. Everything, really, we have come to expect from the Master of Ultra Low Budget Film Making. Processed cheese at its finest! Take that, Hickory Farms!

However, what drew me to "Dracula Rising" was the improbable casting of fallen teen idol Christopher Atkins (last seen in my "Mutiny on the High C's" post) as the lead: a supposedly suave, enigmatic European (!) who also happens to be (gasp!) Vlad the Impaler's son.

The fun begins in the present (well, 1992) at a fancy pants black tie gala at an art gallery. Artist/restorer Theresa (Stacey Travis, who resembles both Kelly McGillis and Katherine Hiegel) meets a mysterious fellow named Vlad (Atkins, stiffer than a board but still a looker). She has this feeling that they've met before; Theresa even asks if Vlad has volunteers at the same food pantry she and her buddies regularly help at.

"You help the poor?" Vlad pants. "Doesn't surprise me."

The two smitten kittens slow dance the night away and, just as quickly as he appeared, Vlad disappears.

Oh, another thing: when Theresa's friend takes a picture of the two dancing, Vlad's image doesn't appear in the photo.

Later that evening we see Theresa asleep. As a gentle breeze ruffles the sheer netting that drapes her 4-poster, Vlad (all in white) suddenly emerges. He paces for a bit, then throws off his cape, revealing his pajama bottoms. Slowly, he crawls over to Theresa's sleeping form. Vlad begins to kiss her gently. Theresa awakens and returns Vlad's affections. The couple then begin to...GOTCHA!! It's a dream sequence! Theresa dreamed it all up! Isn't that...annoying?

Anyway, Theresa begins having these weird dreams about Vlad. Hmmm. What could that mean? Were they related somehow? Were they bowling partners in a past life? She also accepts a job "in Eastern Europe" to restore a painting in "The Church of Lost Souls". It's there she meets Alec (Doug Wert), apparently a priest of some sort, and (surprise!) Vlad. Atkins seems miffed that Wert (who has a vaguely Italian accent) hired Theresa for the restoration job. Why? Did he know somebody in town who could do the same work at cost? Vlad never says. He also insists that Theresa should "stay at the Inn" and NOT at the church. Why all the fuss? Well, it's complicated. So settle in for the back story.

A Hunk Of Burning Love

A long, long time ago, in Eastern Europe, maybe somewhere in the Balkans, Theresa was a devout and humble village maid, the sort of gal who liked to paint pictures and pick flowers. Alas, The Black Death has decimated her village and the people were starving. Good hearted Theresa begged the local monastery to share its bounty, which they do, begrudgingly.

Low and behold, Vlad is a monk at this monastery and he gets hot under the clerical collar for Theresa. Watching this growing attraction with alarm is Father Alec (Wert, again). See, Vlad is the son of Vlad the Impaler, Dracula himself, and Father Alec is just obsessed with keeping Vlad, Jr. pure, considering his family history and all. To this end, Father Alec pesters Vlad, Jr. about the dangers of human copulation so much you begin to think, well, he might be a little nutty. After Alec learns Vlad, Jr has been canoodling with Theresa, he whips Atkins soundly.--for his own good, of course--yet the good father seems to enjoy it just a bit too much.

However, Vlad, Jr.'s and Theresa's forbidden love cannot be denied. Soon the duo move from feeding the poor to snuggling innocently on a blanket in the countryside to getting naked by a water fall to doin' the nasty under water. Personally, I'm always amazed at how virgins in movies are such pros when it comes to having sex. I mean, how is that two people who have supposedly had no previous sexual experiences can suddenly perform like trained acrobats in a sex instruction video? And under water, no less! Talk about beginners luck...

Well, after our little under water exhibition, Father Alec decides that Vlad, Jr. has to be taught a lesson. So he accuses Theresa of witchcraft. With the help of a band of pitch fork toting yokels, poor Theresa is tied to a stake and burned to a crisp. Actually, she melts. Theresa screams in pain; poor Chris yells out "Noooo!" The whole thing would be heartbreaking and horrifying if it didn't remind you of that scene in "Monty Python and the Holy Grail" where bored townspeople falsely accuse Connie Booth of being a witch, simply because they enjoy watching witches burn. All that's missing is John Cleese saying, "She turned me into a newt!" and then sheepishly admitting, "Well, I got better..."

After his lady love is bar-b-qued within an inch of her life, Vlad, Jr. is just, you know, devastated. He wanders around half dead until he comes upon the castle of his long-lost-pop, Vlad, Sr. aka Vlad the Impaler aka Dracula. He's played by Zahari Vatahov, who is easily the most fun person in the whole movie. Vatahov has a voice like Darth Vader and looks like a member of The Insane Clown Posse. "Come to me, my son..." the imperious blood sucker intones to his hapless kid. Promising to help Atkins avenge those who have wronged him and reunite him with his crispy cuddlemate, Vatahov says, "Turn from the light...serve me and live forever!"

Hmmm...a kid who thought his father was dead...learns he's alive...learns he's a real bad guy...dad tells him to come over to the dark side and they will rule the world together...where have I heard this plot before..."Bonanza"?..."Fantasy Island"?... "Star Trek"?...it'll come to me later, I'm sure...

Well, the next thing you know, Vlad, Sr. gives Vlad, Jr. the biggest hickie you ever saw and then mixes their blood. Soon, Chris is sucking the red stuff out of all kinds of people, including Father Alec. "What have I become!?" Chris screams at the top of his lungs.

The monk is now a vampire. In fact, so is Father Alec. While Chris is upset about this, Alec embraces his new life. He is the one who brought Theresa to town so Vlad, Jr. could "turn" her and the two could live happily ever after. Atkins, however, won't allow Theresa to become one of the undead like him. That means Alec and Vlad, Jr. must have a show down in Hell. A Hell that is draped with black sheets and features really cheap F/X, by the way. When these two guys battle it out, the lightening bolts they hurl at each other remind you of a knock-off Laser Floyd show. Anyway, Chris manages to burn Alec. Alec manages to hurl a wooden stake at Vlad. Vlad catches it in the palm of his hand. Then he drives it through Alec's heart. Alec screams. Seconds later, his soul wafts away. Theresa, meanwhile, standing off on the sidelines, has managed, somehow, to keep a straight face. Even more important, considering the heat and humidity of where all this is supposedly taking place, her perm doesn't wilt at all.

Of course, we're not done yet. There is one more piece of business Vlad, Jr. must attend to to make things right.

"I was a fool to think I could resist you," Vlad tells Theresa. "Only through death will the hunger end...And only through my death will you live in peace..." So Chris does what any good, right-minded vampire would do: he steps into the sun. While your jaw drops and your eyes pop, Atkins grabs his face, screams, sways back and forth, sweats, grabs his stomach and doubles over. Without a doubt, it's the best Joe Cocker impression I have ever seen. Too bad Chris dissolves into a pile of goo at the end...


A Bad Romance...And An Even Worse Movie

OK, I know a lot of women find vampires sexy. I have friends who find vampires sexy. There are movies, books and TV shows dedicated to sexy vampires. That's all fine and good. Unfortunately, Chris is just not sexy vampire material. He's not mysterious. He's not European. He's not suave. He's not much of an actor. For such a good looking guy, he has all the charisma of Walter Mondale. And charisma is one thing all vampires must have. On screen, he moves stiffly, like his pants are too tight. When he wants to look intense, he bugs his eyes. In the end, casting Atkins as a tortured romantic hero makes about as much sense as hiring Dick Cheney to head The UN Commission on Human Rights.

The other actors fare slightly better. Doug Wert clearly enjoys playing the bad guy, Father Alec. He even gets to say a nifty line once in a while, such as this: "She has very sweet blood. What we call 'Blood Light'." Stacey Travers isn't asked to do much as Theresa. However, she is an appealing actress and could fit right in in a "Lifetime" movie-of-the-week. Zahari Vatahov as Vlad, Sr. is a real scene stealer. Tall, rather beefy, with a stringy mullet and sporting a weird metal face mask, he could also double as member of ZZ Top or one those "Duck Dynasty" guys--but The Insane Clown Posse should snap him up while they can. I couldn't find anything else about him, so I don't know what other parts he's played. But he makes the most of his small role. And he acts Christopher Atkins off the screen.

Another intriguing element of the flick is music. Usually, vampire movies feature over-the-top classical music with booming choirs going "AHHH!" a lot. Not here. "Dracula Rising" may be the first and only vampire movie with a doo-wop soundtrack! The theme song of the movie is "Be My Angel Tonight" and it sounds like something Richie Cunningham and Potsie Webber would have sung on the old "Happy Days" sitcom. As it is, it's just another element that makes this crazy quilt of a movie, well, crazy.

Well done, Roger Corman! Once again you have shown why bad movies can be so much fun. Horrible acting, cheap F/X, irritating music--that's why we go to the movies! Roger Corman: will you be my angel tonight?

Until next time, keep a bad movie in your VCR and help me SAVE THE MOVIES!