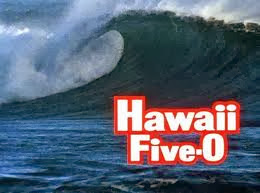 Greetings, movie lovers. Have you heard the news? Adam Levine has been named People's "Sexiest Man Alive" for 2013.

A great honor, to be sure. Not the same as winning a Noble Prize, but, you know, still pretty nifty.

Of course, not everybody agrees with People's choice. Personally, I'd throw my weight behind Johnny Depp, Russell Crowe or Guy Pierce for this coveted title.

However, should People ever decide to give a "Sexiest Group" award, the cast of "Hawaii Five-0" would surely win hands down.

The "Five-0" I'm talking about is not the cast of the original CBS series that ran from 1968 to 1980. Except for it's way cool theme music (provided by The Ventures), the first "Five-0" was a talky, dull exercise in tedium. Granite-faced Jack Lord played Steve McGarrett, head of "The Five 0" unit, a super-duper crime fighting force located in, yes, Hawaii. A cross between a monolith and a 2x4, Lord never smiled. Or blinked his eyes. Or changed out of his blue Gaborone suit. In fact, long time viewers of the show never knew if McGarrett had a wife, kids or even a home outside the 5-0 building.

The new and improved Steve McGarrett, meanwhile, is played by Australian hottie Alex O'Loughlin, who is a force of nature--and an army of one. Unlike the stolid Lord, this Steve can shoot any weapon, drive any vehicle, pilot any plane, scale mountain tops, sail stormy seas, surf, pick locks, break into (and out of ) prison, speak several languages, walk on a bed of hot coals, you name it.

And that's not all! This Steve McGarrett also has the world's highest pain threshold and can perform life saving surgery... on himself!

What's more, this Steve McGarrett  packs more into one day than some folks do in an entire week. For instance, on a recent episode, Steve learned his beloved Aunt Deb (Carol Burnett!) had been diagnosed with incurable brain cancer; thwarted an Albanian hit-man from offing an innocent dental hygienist who had inadvertently witnessed a Russian mob hit; ran interference to assure the safety of the President of the United States (who was secretly meeting with some North Koreans for high level nuke talks); and still found the time to organize his family's Thanksgiving Day celebrations at a cushy restaurant where Bobby Vinton sang.

Of course, Steve isn't the only multi-tasking hunk on this show. Next up is Scott Caan, the son of James Caan. He plays detective Daniel aka "Danny" aka "Dan-o" Williams, a New York transplant who joined Five-0 to be near his daughter. His ex-wife Rachel had moved to Hawaii after she remarried. Danny and Rachel are still friendly, in fact. How friendly? So friendly that there was a 50-50 chance Danny was the father of Rachel's new baby!

I'm not sure how Danny found himself in this situation, but I do know that when Rachel went into labor (and her knuckle-headed new hubby was nowhere to be found), Danny selflessly stepped in to help. He not only kept an eye on their daughter, but he coached Rachel through her labor and delivery and still managed to check in with the Five-0 gang and offer any assistance in catching that week's bad guy.

Then we have Chin-Ho Kelly. In the original "5-0", Chin-Ho was played by a rather portly, middled-aged fellow in a three piece suite. Not any more! The new Chin-Ho is played by Daniel Dae Kim, a lean, mean fighting machine with killer cheekbones and washboard abs. This guy is also a computer whiz, a crack shot and can speak several languages.

But Chin-Ho is NOT just another pretty face. Like all the 5-0 guys, Chin will do anything for his family. For instance, a while back Chin-Ho's uncle was accused of corruption and dipping his hand into the 5-0 money bag. But that was a lie! Sort of. See, his uncle's wife was very sick and needed a kidney transplant and he just didn't have the money to pay her medical bills. So, yes, he did take the money-- to pay for his wife's medical treatment. Chin-Ho, when told the truth, was not only horrified by what his uncle had done, he must have been shocked at what a crappy health insurance plan his uncle had. Thus, he stepped in and said he took the money, not his uncle. And he refused to rat his uncle out. Eventually, Chin-Ho was cleared of all charges, his uncle never had to go to prison and his aunt got to keep her kidney.

Now, did I mention that Steve McGarrett has a rather complicated family life, too? Well, he does. First, his father John was a hot shot police officer guy who was just obsessed with solving this case about the Japanese mob. So much so that Steve's kid sister Mary (a bit of a screw up, I must say) felt their dad never really loved them. Then, one day, John McGarrett sent his kids over to the mainland to" protect them." This was the last time the siblings saw their pop.

Steve and Mary's mom, Doris, was also a super duper secret agent who worked very dangerous cases. Then the kids learn mom is dead. Only she wasn't! Doris faked her death to "protect" Steve and Mary. So when mom pops up one day and announces she's not dead, Steve and Mary were, well, a little confused. And just as soon as the siblings had gotten it around their heads that mom was alive, she up and disappears again! While Mary finds all this back and forth too much too handle at times, Steve takes it all in stride--because, really, what else is he going to do? His job at 5-0 keeps him busy 24 hours a day. Plus he has to work out to keep in shape, practice his marksman skills, keep up with the latest computer upgrades AND keep his ear to the ground about all those baddies that circle the globe causing all kinds of murder and mayhem. In short, Steve just doesn't have time to sit and brood.

Once you start watching "Hawaii Five-0", you will agree with me that this police force/special unit is the best looking police force/special unit EVER. Seriously, the 5-0 recruiters must have contacts with the Chippendale's organization, because NOBODY on this staff is less than drop dead gorgeous. And they all have to go around shirtless and take a shower AT LEAST once an episode. I think it's the law.

Adam Levine, I'm sure, has his partisans. However, one look at the "Hawaii Five-0" gang and you know "The Voice" co-host just can't hold a candle to the karate-chopping, sharp-shooting, speed-racing, surgery-performing, multiple language-speaking zero body fat crime stoppers Steve McGarrett, Dan-o and Chin Ho Kelly.