"The Mole People" Or A Whiter Shade Of Pale 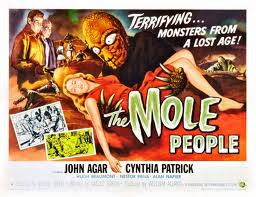 It all starts with a rather tweedy, tedious professor yammering about different theories concerning the position of the earth. This prologue has no direct bearing on the events depicted in the flick, so let's just skip it, OK?

Next we find Judd Ballamin (Hugh Beaumont) and Roger Bentley (John Agar, Shirley Temple's ex) on an archeology dig in Asia. After they find ancient tablets and trinkets, the gents decide to scale a snow covered volcano in search of a lost Sumerian tribe.

Now, if it seems like I'm rushing past these early plot points it's because, well, I am. Why? Because they are BORING. However, if you enjoy endless (and I do mean endless) shots of guys climbing up snowy mountains and then climbing down into dark pits, well, savor these scenes with my compliments. 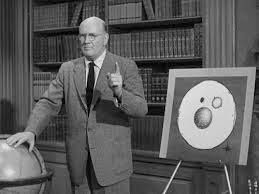 "Because I said so..." A tweedy prof shares an early design of the Jack'n the Box restaurants mascot Jack in the opening of Universal-International's sci-fi epic "The Mole People." 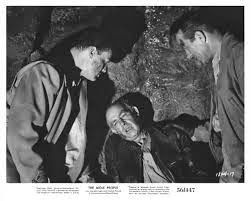 John Agar (left) and Hugh Beaumont (right) try to convince an expendable extra to continue filming his scene in "The Mole People."

For all practical purposes, "The Mole People" doesn't really get going until Hugh, John and a rather tubby Frenchman are snatched by the said Mole People and brought before Elinu, the high priest of Ishtar (Napier). Although these folks have a king, Elinu appears to be the boss around here.

This society is descended from an ancient Sumerian tribe that was displaced by a flood. The survivors set up shop in the bowels of the earth, which left subsequent generations to become albinos. They worship the Goddess of Ishtar and believe there is no other world but their own. Folks sip goat's milk and munch on mushrooms, which are harvested by the Mole People.

The Mole People, alas, are a badly treated minority. They spend their days toiling for mushrooms and their white-skinned over lords whip them mercilessly just for the hell of it. They aren't fed well, either. 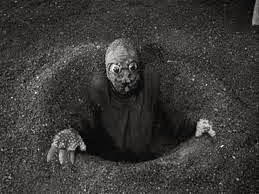 Oh, hi! One of the Mole People pops up to say hello. 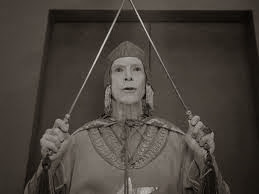 
While I was watching "The Mole People", it occurred to me that this flick was very much like "Logan's Run" from 1976. That '70's shlocker had survivors of some catastrophe all living in the Mall of America, which they also believed was the only world left. Both societies strictly controlled their populations. In "Logan's Run", folks hitting the big three-oh must die. "The Mole People" sacrifice their unneeded citizens to the Goddess of Ishtar; actually, they are just bar-b-qued by the sun. Meanwhile, the poor saps in "Logan's Run" must participate in something called "the Carousel"  where, supposedly, people are "reborn." Of course, they just die, but the citizens have been hoodwinked into believing otherwise.

An interesting set of commonalities, don't you think? Anyway, back to the action.

Elinu sees the scientists as a threat to the albino people's way of life (and his power), so he wants them dead. But Hugh and John possesses a mighty weapon that crushes both the albino soldiers AND the Mole People: a flashlight! Living underground for so long has caused the albino people's peepers to become sensitive to any light. Thus, all John has to do is waive his flashlight around and everybody cowers in fear and awe.

There is one albino, however, who doesn't have this problem. That's Adad (Cynthia Patrick), a non-albino chick who has been dubbed "The Marked One." Not only does Adad have normal eyes and skin pigmentation, she plays a mean 3-string banjo. She and John fall madly in love because the movie says they do. 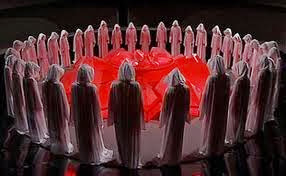 "OK, what do we do now?" Folks from "Logan's Run" prepare to "renew" themselves in "the Carousel".  Little do they know, they are toast. 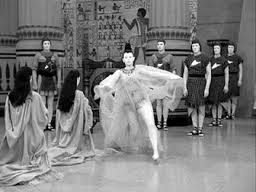 Meanwhile, over on the set of "The Mole People", unneeded citizens prepare for the "honor" of sacrificing themselves to the Goddess of Ishtar--where they will become toast. Literally.

You are probably wondering what all this is leading up to. Well, it leads up to this: the Mole People finally get fed up with harvesting mushrooms on an empty stomach and decide to revolt. During the uprising, an earthquake hits and the heavy doors that have sealed this Sumerian society off from the outside world are flung open. In pours the sun, which kills everybody off--except the Mole People (they are moles, after all) and Adad. Hugh and John survive, too. After wishing the Mole People the best, our three survivors decide to head back home.

John and Adad appear to heading for a happily ever after future--until another earthquake strikes. Unfortunately, this quake unleashes a big boulder which promptly flattens Adad. If this ending strikes you as a bit abrupt and out of place, it has good reason to: after "The Mole People" was already in the can, the producers worried that movie goers would think John and Adad were a "mixed race" couple--which wouldn't fly in 1956. So they shot a new ending with Adad dying. Of course, this was silly and dumb, but, then, so is the movie.

Although the flick is titled "The Mole People", the actual Mole People have a rather small part in this production. And they aren't the bad guys. Ads and stills for this movie show the Mole People attacking women, but they actually do no such thing. No, the real bad guys are the whip wielding, skirt wearing albinos and high priest Elinu, who is secretly angling for more power.

For leading man John Agar, "The Mole People" was just one of the many, many grade Z shlockbusters he toiled in after making his debut in 1948's "Fort Apache", directed by John Ford and co-starring new bride Shirley Temple. Despite his manly appearance, poor John couldn't act for beans and his string of cinematic stinkers ("Revenge of the Creature", "Daughter of Dr. Jekyll", "The Brain from Planet Arous" and "Curse of the Swamp Creature" among other efforts) would eventually earn him a coveted nomination as "The Worst Actor of All Time" by the beloved Golden Turkey Awards in 1980. Unfortunately, the Agar-Temple marriage did not last long and their divorce made headlines--especially when charges of alcohol abuse and domestic violence were made public. Happily, Shirley remarried and began a new career as a diplomat. Agar would eventually embrace sobriety and appear in an occasional film role, such as the mayor of New York in the horrible remake of "King Kong" in 1976.

Even the Mole People managed to survive "The Mole People." In the 1966 caper "The Wild World of Bat Woman", scenes from the 1956 flick (as well as bits from a Mexican wrestling movie) were added to flesh out the story of crime fighting Bat Woman and her bevvy of Bat Girls. Later on, The Golden Turkey Awards
would choose "The Mole People" (along with "The Killer Shrews", "The Food of the Gods", "The Nasty Rabbit" and "Night of the Lepus") as contenders for "The Worst Rodent Movie of All Time". The ultimate winner was "Food of the Gods", but, remember, it's an honor just to be nominated.

Until next time movie lovers, keep a bad movie in your VCR/DVD player and SAVE THE MOVIES!