As one generation follows the next, it's not uncommon for the youngsters to asks the oldsters what certain decades were like.

Naturally, some eras are easier to describe than others. The 1920's, for example. That's pretty easy: flappers, bath-tub gin, the Charleston, silent movies, the Crash of 1929.

Then there are decades that defy description because they were so rotten.

Yes, this sci-fi cheese combo platter, although technically set "in the future", pretty much encapsulates everything that hellish, polyester-drenched era had to offer--and then some. 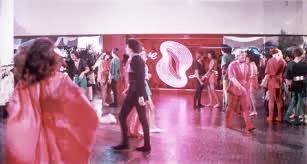 The future belongs to mall walkers: the citizens of "Logan's Run" walk and walk and walk. To bad they never get anywhere.

As "Logan's Run" begins, we learn that what remains of humanity resides in a large, domed city complex that resembles the Mall of America. (Editor's note: This is not just a cheap shot. Well, yes it is. The movie was actually filmed in an unopened shopping mall.). Because all of life's more mundane functions have been taken over by automation and computers, mankind is free to enjoy themselves 24-hours-a-day, which they do.

Unfortunately, the party is over when you hit 30--just like in real life! (Rim Shot!). See, in the future, every new born baby is fitted with a "life clock", a crystal embedded in the palm of your hand. The life clock turns colors as you age. When you hit the big three-oh, it turns red.

Once your "Last Day" arrives, citizens must participate in something called "The Carousel". At the same time every night, people gather at a big stadium and the participants (who wear red feetie pajamas and hockey masks) file in. Then a gigantic Swedish underarm crystal is lowered. As the spectators cheer "Renew! Renew!", the pajama wearers float up to the underarm crystal and get zapped. Those that are zapped are said to be "renewed" or "reborn" and start their lives over again.

At least, that's what the government tells you. But it's all a lie! Nobody is "renewed"--ever. The poor saps participating in The Carousel are just being vaporized, i.e. killed. This is how the government controls the population.

Of course, some people, either out of fear or because they know the government is a bunch of big fibbers, try to dodge the inevitable and make a run for it. These people are called (what else?) "Runners". To catch these so-called Runners is a police force known as "Sandmen". Our hero Logan 5 (a very '70's name if there ever was one) is played by Michael York--and he's a Sandman. 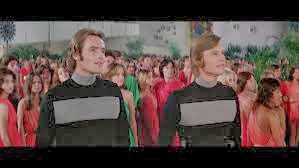 Michael York as Logan 5 and the late Richard Jordan as Francis 7 are best buds as well as "Sandmen". 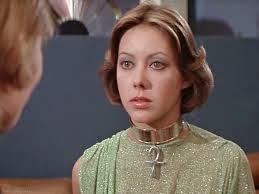 Jenny Agutter is Jessica 6. Her hair is pure 1970's, even though it's the 23rd century. FYI: I tried to wear my hair like this in middle school and couldn't pull it off.

One day, Logan is called into work by the all-knowing, omnipresent computer. In the personal effects of a recent Runner was a metal charm known as an "ankh". It seems that there is an underground movement helping folks escape The Carousel and find "sanctuary". The ankh is their secret symbol. Logan is charged with infiltrating this group and then destroying the "sanctuary."

Logan, who appears to have more on the ball than the rest of his fun loving fellows, has had his doubts about "renewing", but he's basically been OK with his society over-all. However, he's shocked when the computer informs him that over a thousand runners have been "unaccounted for". And no, they haven't been renewed. This makes Logan realize that his world is a lot crueler than he believed possible. However, he doesn't have time to do anything about it: to make sure Logan completes his assignment, the computer pushes his life clock to red, meaning he's toast.

As it happens, Logan knows exactly who can help him: Jessica 6 (Jenny Agutter). Earlier in the week, Logan was relaxing at home, wearing a caftan he must have borrowed from "Maude" and he turned on "The Circuit". The Circuit is like a closet/big screen TV where you can flip through the channels to find yourself a cuddlemate. Logan chose Jessica, who seemed strangely reluctant when he announces "Let's have sex" two seconds after they meet.

Turns out one of Jessica's closest friends just went on Carousel and she was lonely and sad and at loose ends--that's why she was in The Circuit. Most important, though, Jessica had an ankh dangling from her choker. 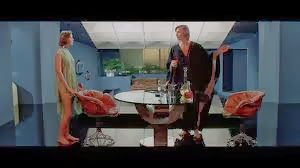 "Welcome to my home. Let's have sex." Sandman Logan cuts to the chase when Jessica arrives at his swingin' bachelor pad.

At first, Jessica denies knowing anything about "sanctuary". In due course, however, she falls for Logan and agrees to help him.

What follows next is a long chase sequence where Logan and Jessica run away from various gun-totin' Sandmen as they try to reach "the outside." By far the biggest menace the couple face is Box (Roscoe Lee Brown), a tin foil robot who was suppose to catch fish for the domed city's food supply. Instead, he switched to freezing runners in their underwear and stacking them up like cord wood for safe keeping.

"It's my job," Box replies proudly.

Luckily, Logan and Jessica laser Box into oblivion and make their way to "the outside"--which is a weed choked and broken down Washington, DC. It's there, living among dozens of cats, they meet "The Old Man", Oscar winner Sir Peter Ustinov. Bunking down with Peter (who is a bit dotty), Logan and Jessica learn about life before the domed city was built, a society where people married, had kids and died naturally, not forcibly at 30. Deciding they must tell their fellow citizens the truth about their world, Logan, Jessica and The Old Guy trek back to the city in order to spread the good news. 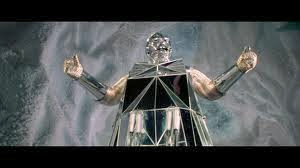 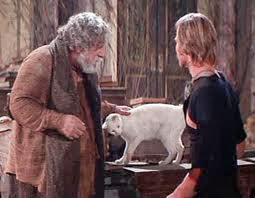 
Of course, Logan and Jessica are caught. Then our hero has his mind probed about "sanctuary." When Logan refuses to knuckle under and gives the computer answers it doesn't want, its circuits overload. A series of explosions rock the domed city and people pour outside in vast waves. They are greeted by Peter Ustinov, living proof that life doesn't end at 30--which, for the record, it doesn't. Realizing they are now free to live a long and natural life, the citizens cheer their new existence. Logan and Jessica, happily reunited, decide to get married.

The characters in "Logan's Run" pursue pleasure 24-hours a day. So did the people in the 1970's. Everybody wanted to "do their own thing" and party like it was 1999. And so they did. Literally. We had some hippie neighbors when I was a kid, and they hosted a wild party every Friday night and it didn't end until we saw all their guests passed out in the front (and back) yard on Sunday morning. No wonder my mom kept the back drapes closed a lot.

Furthermore, in "Logan's Run" all the characters have no-strings-attached-sex all the time. It's practically their only sustained activity, after shopping and working out. There are no marriages, families or monogamous couples. In the 1970's, real people decided to toss "middle class morality" out the window, along with all it's assorted "baggage", "hang-ups" and "guilt trips". Folks then devoted themselves to wife swapping, key parties, swinger's groups--just like in "Logan's Run"!

Fashion during the 1970's was pretty awful, too: wide legged pants, thick stack heels, polyester. Yuck! Hair, meanwhile, was either long, layered, feathered or cut in a "wedge". The characters in "Logan's Run" model these styles in all their sartorial suckiness. Moreover, the undisputed glamour girl of the 1970's was a former Texan named Farrah Fawcett-Majors--and she's in this movie! Farrah plays Holly 13, the dim bulb assistant to a plastic surgeon. Although her role is small, Farrah would achieve greater fame later that same year by co-starring in "Charlie's Angels", a jiggle TV show about three female PI's who solve crimes without wearing bras for a man named Charlie. Her appearance in "Logan's Run" was just the start of Fawcett's career.

As mentioned earlier, "Logan's Run" ends amid explosions and the citizens of the domed city rushing out--for the first time--into the sunlight. They are all astounded by what they see and our completely flummoxed by what to do next.

That's how the 1970's ended in real life, too. After a decade of hard partying, ugly clothes, horrible music and blue eye shadow, everybody woke up on January 1, 1980, gazed out at an unfamiliar landscape and went, "OK, now what do we do?"

So if the Twenties roared, the Thirties depressed and the sixties Rebelled, the seventies...just sucked. But you don't have to take my word for it; watch "Logan's Run" and experience all the '70's suckiness for yourself.

Until next time movie lovers, save the movies!