Lee Van Cleef Is "The Master" Of His Domain 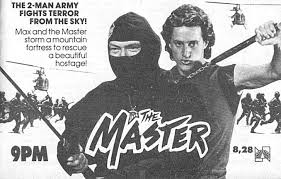 Lee Van Cleef and Timothy Van Patten draw swords in a TV Guide ad for their series "The Master".

Broadcast on NBC for 13 episodes in 1984, "The Master" starred one Timothy Van Patten (formerly of "The White Shadow") as Max Keller, a curly-headed slacker who roams the countryside in a custom van with no visible means of support. His best buddy--and moral, intellectual and acting superior--is Henry, a hamster (or gerbil). Henry rides in a state-of-the-art mounted cage and easily out acts Van Patten every chance he gets.

An even bigger draw than Henry is the ferret-featured, epic sneerer Lee Van Cleef, star of "The Good, the Bad and the Ugly" and countless other Spaghetti Westerns. He plays John Peter McCallister, "the first Occidental ever to become a ninja master."  McCallister is pretty content being a ninja until he learns "he has a daughter he never knew he had." So he makes tracks to the US of A to find her, which upsets his fellow ninjas. I guess ninja's don't have a family leave policy. 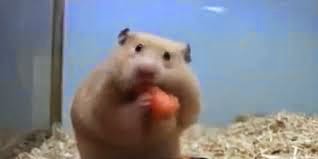 ﻿
Henry the Hamster (or Gerbil) chews plenty of scenery (and carrots) in his break-out role in "The Master".

Where does Demi Moore figure in? Well, she plays Holly Trumbell. Max meets her when she flags him down in order to escape a nasty sheriff (Bill McKinny). See, Holly and her dad Claude Akins (the cast list priceless, am I right?) are being squeezed by an evil developer (Clu Gulgar), who wants to pave over their historic airport and put up a shopping mall.

Max and McCallister, meanwhile, meet in the local dive bar. It's there that corrupt sheriff McKinny has the nerve to paw through the aging Master's suitcase. This ticks Lee off sooooo much that his body double proceeds to demolish the bar. In the ensuing mayhem, Max and the Master escape together and find refuge at the Trumble Airport.

Still with me? Good. Max is soooo impressed that John is a ninja that he offers to help the old pepper find his daughter in return for ninja lessons. Van Cleef at first demurs, insisting that Max lacks the "internal discipline" (not to mention the smarts) to become a ninja. He later relents because the story-line demands it.

There are two sub-plots running through "The Master" like an open sewer: locating McCallister's long lost daughter is one. The other involves disgruntled ninja Okasa (Sho Koshgi), who wants to off the Master. Okasa is sooo determined to do Van Cleef in, that he dodges his every step, even donning elaborate disguises to nail him. He comes fairly close, but Lee always manages to escape in the nick of time.

While Max, the Master and Henry travel over hill and dale trying to locate Van Cleef's daughter, they stop along the way to help people with their personal problems. Besides Demi and Claude Akins, our heroes also help a dance club owner fight a Japanese mob take-over (and assist his daughter with her physical therapy), as well as inspire the workers of a local cannery to establish a union. 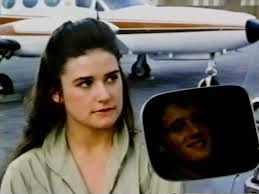 However, my favorite episode of "The Master" involved Max and John saving the bacon of a senator's dim-wit daughter.

The duo first come to her aid when her spiffy red sports car experiences brake failure. Max, who happens to be hang gliding at the exact spot where this gal's brakes give out, swoops down and has her grab onto his...uh...wires or something. While Cindy (as I call her, I couldn't find her name in the cast list) hangs on for dear life, Max whizzes over to where the Master is standing. On Max's command, Cindy then flings herself into John's waiting arms. This stunt is suppose to be nail-biting and show what great shape the Master is in. In reality, it looks as if an intern tossed a 50 pound bag of wet cement at the unsuspecting Van Cleef's bread-basket.

To thank the fellas for saving her life, Cindy invites them to her father's snooty garden party. This black-tie gathering is interrupted when terrorists (disguised as waiters) turn over the buffet table and take hostages, one of them being Cindy. The hostages are then hustled over to an impenetrable fortress to rot. Actually, the impenetrable fortress is not really that impenetrable: guest-star George Lazenby (James Bond in "On Her Majesty's Secret Service") manages to climb over the property's fence and snap pictures of the impenetrable fortress...to show how impenetrable it is. Meanwhile, John and Max have been taken to police HQ. The police are at a loss as to how to save the hostages until one of them recognizes John is a ninja master and the only one who can climb up the fortress's high walls and save the day.

Besides the pedestrian writing, ham-bone acting, predictable slo-mo car crashes and cheesy special effects, "The Master" is also a hilarious showcase for the dubious talents of one Timothy Van Patten.

As for Demi, her role in "The Master" required her to do little more than pout and pucker-up with Van Patten. She would later perform this skill with Robert Redford, Patrick Swayze, Tom Cruise and Michael Douglas. While Moore's future leading men were considerably more "A-list" than Timothy Van Patten, her acting never strayed far from her "Master" beginnings. 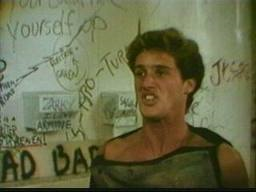 Timothy Van Patten polishes his rodent impression. A real rodent would later upstage him in  this department, too.

So what does this all add up to?

1) Timothy Van Patten was the Elmer Fudd of his generation.

3) Demi Moore has given the same acting performance over and over again.

4) "The Master" was a lot like "BJ and the Bear", except the chimp was replaced by a hamster/gerbil. And Claude Akins showed up, but not as Sheriff Lobo. And the lady truckers were replaced by ladies-in-distress. And there is a ninja.

6) Nowhere else but in the universe of Junk Cinema will you find a mush-mouthed jerk driving around with a Spaghetti Western icon who ends up tangling with an ex-James Bond, Monte Markum, Ed "Kookie" Byrnes and the future ex-wife of both Ashton Kutcher and Bruce Willis.