If You Think Your Life Sucks, Please Watch...(Southern Edition) 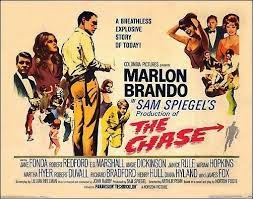 There will be a hot time in the old town tonight according to "The Chase"s movie poster.

Are you feeling blue?

Do you have (in the words of Holly Golightly) a case of "the mean reds"?

Has the marriage of George Clooney left you in a grey funk of despair?

Well, then, sit yourself down, pour yourself a glass of so-dee-pop and partake of this blog's semi-regular feature "If You Think Your Life Sucks, Please Watch...", where a pot boiler ne plus ultra is unfurled to chase those blues, reds and greys away.

So, without further ado,  "If You Think Your Life Sucks, Please Watch...

"Are we on for tonight?" Randy Emily (Janice Rule) confronts one of her many cuddlemates  at the local bank.

What do you get, movie lovers, when you start with a Texas town run by a filthy rich oil baron, fold in a population of booze-chugging, bed-hopping couples, sprinkle in a convention of randy dentists, stir in a Bible thumping spinster and top it all off with a notorious prison escapee named Charles "Bubber" Reeves?

You have the Lillian Hellman-scripted, Arthur Penn-directed deep-fried Velveeta bar-b-que "The Chase", that plays like a cross between "Peyton Place" and "The Andy Griffith Show"...on Viagra.

Val Rogers (E.G. Marshall) is the filthy rich oil baron who pretty much calls all the shots in fictional Tarl, Texas. As our feature presentation begins, he is preparing to host his annual birthday party/fund raiser, the social event of the year. However, he's so obsessed about the antics of his booze swilling son and heir Jake (Edward Fox) that he's about to lose his mind--or at least wet himself.

Jake is married to Diana Hyland (who's hair-do resembles a three foot high prune danish), but is carrying on with trampy barmaid Anna (Jane Fonda). These two have a regular Saturday night date to meet at the local No-Tell Motel where they bend the elbow and burn the sheets.

"Look what I found in the mini-bar!" Jake (Edward Fox) and Anna (Jane Fonda) prepare for their regular Saturday night social.

Meanwhile, mealy-mouthed bank VP Edwin Stewart (Robert Duvall) is unhappily hitched to Emily (Janice Rule), a hip-swaying harpy who prances around town like a bitch in heat. When not sleeping with all comers, Emily enjoys needling hubby as to why they are left off Mr. Rogers' birthday party guest list-yet again.

What ties these folks together is Charles "Bubber" Reeves (Robert Redford), the local boy made bad who has escaped from prison and is believed to be headed straight for Tarl.

Anna, the trampy bar maid sleeping with Jake Rogers, just happens to be Bubber's wife. Jake's pa, don't ya know, is desperate that this sordid tidbit doesn't get back to Bubber--although everybody else in town seems to know they are an item. Consequently, Duvall has a guilty conscience because he framed Bubber for a theft he actually committed back when they were teenagers--an action that sent Bubber to reform school. Nasty wife Emily blabbed this top secret info to Bubber before his latest stint in the joint, and now hubby Edwin is afraid Bubber is heading home for revenge.

Not to be left out is Miriam Hopkins as Bubber's hard-bitten, broken-hearted ma, who can't for the life of her figure out how she spawned such a demon seed.

Trying to keep this soapy stew from boiling over is Sheriff Marlon Brando (!), sporting a southern drawl that resembles Boss Hogg with a mouth full of wet paper towels. See, many folks in Tarl uncharitably believe Val Rogers "gave" Brando his job and thus have a low opinion of his expertise. The only person in town who supports Brando is future "Police Woman" Angie Dickinson, wittily cast against type as his demure wife, Ruby--the only woman in Tarl sleeping with her legal husband, by the way.


Sheriff Brando hopes he can quietly apprehend Bubber himself, thus dousing the town's raging case of Bubber fever. That will be no easy task, for as they day wears on, the citizens of Tarl have gotten themselves all liquored-up at various parties, where they dance wildly, suck face, gleefully brandish their fire arms and gab non-stop about you-know-who.

Now, if "The Chase" is beginning to resemble a ponderous, over-the-top, faux-Southern Gothic meller where the cast chews the Grade A fat while simultaneously trying to out do each other with their "honey child" accents...how right you are! There is just something about the opportunity to utter lines like "I swear, it sends a sheddah up my spine" or "I'm more nervous than the only virgin at a prison rodeo" that turns respectable performers into Jethro Bodean and Ellie Mae Clampett. All that's missing is a man in a white suite, fanning himself with a Panama hat, declaring, "I will send your client so far up the river, sir, he will come back with gills!"

Will Bubber indeed make it back to Tarl? Will he meet up with estranged wife Anna? Will he take revenge on Edwin for framing him for that teenage theft? Will he pound the tar out of Jake Rogers for sleeping with his wife? Will Bubber and his ma have a touching reunion to make peace or will they stage a screaming match instead? And will the inebriated, gun totin' citizens of Tarl over power Sheriff Brando and settle Bubber's hash for good?

Your Parents Before You Were Born: The residents of Tarl party down.

To find out, watch the movie yourself! I had to, so there is no reason you can't.

However, you might be wondering, "Auntie Beth, how could a nutty-as-fruit cake movie like "The Chase" make me feel better?"

1) "The Chase" clearly demonstrates that it's better to be single than sorry. Every married couple in this flick, except for Brando and Angie Dickinson, are ill-suited, adulterous and very unhappy. Don't get married just to satisfy convention; marry for love or don't marry at all.

2) If you ever dreamed of going back in time and living in one of those sleepy southern towns like Mayberry or Hooterville (home of "Petticoat Junction") or Tarl, think again. Beneath the "aw shucks" friendliness, these townships are a powder keg of twisted passions, so much so that the residents often act like the participants in a hormone experiment gone wrong.

3) The next time a notorious criminal or a bully from your past slips out of prison, lock your doors and windows and let the law handle it. DO NOT host a wild, drunken party that allows your male guests to become so delusional and shit-faced that they take matters into their own hands.

4) If you are a gal from "the wrong side of the tracks", marrying the town's most notorious resident and then sleeping with a married man while hubby's in prison is not going to improve your life one bit. Also, should your hubby confess something to you while in the marriage bed, you should keep it private. Don't tell all while having a booze-up with friends at the local watering hole.

5) Finally, "The Chase" proves that money can't buy you class, make you a better parent to your child or bury your sins. All money does is make sure you don't have to worry about money.

So you see, movie lovers, your life isn't so bad. Things might be tough now, but as "The Chase" clearly shows, things could be a lot, lot worse. Instead of emulating Robert Redford's Bubber Reeves, take a page from George Clooney's book: marry for love, live in the present, be careful with your money, obey the law and, above all, Save The Movies!

He is not amused: Sheriff Marlon Brando contemplates why he agreed to star in this movie.