"Manos: The Hands Of Fate" Is An American Horror Story Freak Show (And A Bad Movie, Too) THE FINISHED POST 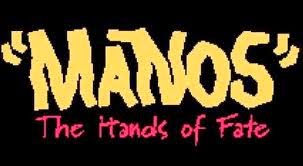 You Have Been Warned: The title card for our feature presentation.


Greetings to you and yours, movie lovers.

It's October, which means only one thing: Halloween! All Hallows Eve! All Saints Eve! All Souls Day! Hallowtide!

You know, the day people trick or treat and stuff.

So to celebrate the season of spooks, why don't we pry open the Junk Cinema celluloid crypt and unearth a little movie mayhem?

Nineteen-sixty-six was the year our feature presentation "Manos: The Hands of Fate" was released. One of the dumbest. daffiest and most deranged flicks EVER committed to film stock, "Manos" is so laughably awful that it rivals "Plan 9 from Outer Space" as one of THE WORST movies ever made...in ALL the world...AND parts of Canada.

The fun begins by introducing us to hubby Mike (Hal P. Warren, more about him later), wife Margaret (Diane Mahree), daughter Debbie (Jackey Neyman) and pet pooch Pepe the poodle. They are on vacation and driving to their motel. Unfortunately, they miss the turn-off and Mike, being an idiot, refuses his wife's pleas that they stop at a gas station and ask for directions. That's how they wind up at "The Valley Lodge", a rancid, run-down establishment where a scruffy, twitchy fellow sporting knee caps the size of snow tires greets them. 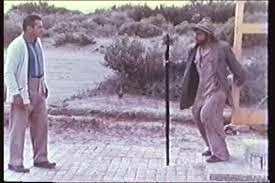 "Are you the concierge?" Mike (Hal P. Warren) meets Torgo (John Reynolds) for the first time.


"My name is Torgo (John Reynolds)", he sputters. "I watch the place while The Master is away."

Now, any sane person with an IQ above room temperature would take one look at Torgo and his creepy motel, jump back into their car and gun it. Not these people, who decide they have no choice but to spend the night there. (Actually, Mike decides they must spend the night there and that is just the first of many, many stupid decisions that doom these people--and the movie. And the audience.)

Once inside Motel Hell, hubby and wife spy a huge oil painting of The Master, who resembles a demonic Frank Zapa with Groucho Marx's bushy eyebrows and 'stache. According to Torgo, The Master is "always with us" and he "likes beautiful women." That last bit of info is directed at Breck Girl Margaret, who is not in the least bit flattered.

Then things start to get weird.

First, strange, howling noises are heard outside and pooch Pepe dashes out into the dusk. Husband Mike later finds his body and makes an I'm-going-to-throw-up-face, while Margaret wonders what kind of a beast would turn sweet Pepe into poodle puree'.

Next, daughter Debbie toddles away to go exploring. She returns later with a new friend: a menacing, red-eyed Doberman she found "at the big place." What is "the big place", you ask? Well, that is where The Master (Tom Neyman, little Jackey's real life pa) resides with his multitude of bouffanted, sheet-draped "wives". These folks spend a large chunk of their day in some sort of hyper-sleep, although the wives snap-to when The Master orders them awake. 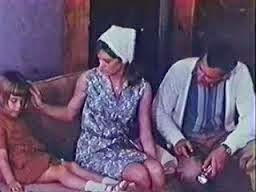 "Haven't we told you a hundred times not to play with dangerous hell beasts, young lady?" Little Debbie returns from "the big place."

Now we come to the part of the flick I like to call "We Married Manos", after a pithy saying attributed to "MST3K"s Tom Servo. The Master must have about 6 or 7 "sister wives" and ALL OF THEM have an opinion on what to do with the hapless family in their midst. The gals agree Mike is toast, but what to do about Margaret and Debbie? Kill them both? Make Margaret The Master's new wife? Let Debbie go free? Perhaps make Debbie a wife-in-waiting?

This spirited discussion suddenly turns nasty, however, when the wives stop arguing about the family's fate and start complaining about their shared hubby's lack of attention and his roving eye.

"He has no more time for his older wives!" snips one.

Their claws now unsheathed, the wives launch into a hair-yanking, face-slapping, sand-throwing catfight that shows directer Warren knew just who is his prospective audience would be.

While The Master's wives duke it out, Mike finally decides they better leave. Unfortunately, their car won't start. While hubby Mike tinkers with the transmission, Torgo sneaks up from behind and conks him on the noggin. Out cold, Torgo ties Mike up to a poll and leaves him there to rot--then promptly scampers over to spy on Margaret, who has stripped down to her skivvies.

Eventually, Mike snaps back to life, unties himself, and rejoins his hysterical family. With The Master and his wives in hot pursuit, Mike, Margaret and Debbie run off for help. Then Margaret sprains her ankle and tearfully pleads for hubby to leave her behind in order to save Debbie. Does he follow her advice? Of course not. Instead, Mike convinces his wife to return to Motel Hell because that is the last place The Master and the Mrs' will look for them(?). Also Mike announces, "I have my gun!" 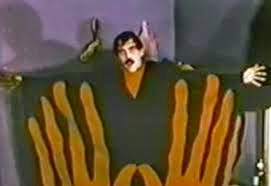 Put (both) your hands together for "The Master"!


So back they go and, sure as shootin', The Master IS waiting for them. D'oh! Mike fires off round after round into The Evil One, but they have no effect on him. D'oh! Then the screen goes ominously black...

Suddenly we are introduced to two college co-eds with gigantic bouffants. They are planning to meet up with their gang "and have a blast." Unfortunately, they miss a crucial turn-off and wind up at...The Valley Lodge. There they are greeted by a zombified fellow who haltingly states, "I am Michel. I take care of the place while The Master is away."

And where is The Master? Back at "the big place", sound asleep, with his bevy of wives surrounding him...which now includes Margaret...and little Debbie. As "The Love Theme from Manos: The Hands of Fate" cues up, we are shown that creepy painting of The Master once again as the words "The End?" flash on screen.

It's all over now, except for the credits...and the blame.

After experiencing a film as nutsy as "Manos: The Hands of Fate", one begins to suspect that the "back story" of how this hilariously dreadful dog made it to the silver screen must be a real corker. 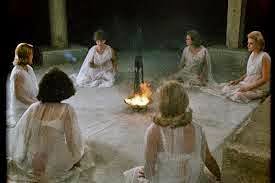 "We Married Manos": The "wives" of The Master settle down for some girl talk.

Hal P. Warren was a fertilizer salesman from El Passo, Texas, who was also active in community theater. One day, he ran into the Oscar-winning screenwriter of "The Heat of the Night", Stirling Silliphant, who was in town scouting locations for a future project. Warren became convinced after talking to Stirling that film making must be a snap and decided to write, produce, direct AND star in his own flick.

Recruiting his cast and crew from a local theater group and modeling school, Hal purchased a camera that didn't record sound and went to work. Warren's inexperience in front of AND behind the camera is painfully apparent from the start; sharp-eyed viewers will notice the chalk marks on the floor indicating where the actors were to stand, as well as several appearances by the boom mike. Continuity jumps are common. Because no sound was recorded during filming, Hal and two other people dubbed in all the voices themselves. Meanwhile, the actors look stiff and uncomfortable--although The Master's "wives" throw themselves into their cat fight with relish.

Warren, however, was totally convinced that he had a hit on his hands. Unlike other bargain basement film productions, "Manos" was not shot over, say, a three-day weekend, but filmed over the course of two months. Director/writer/producer/star Warren became such a diva during this period that his cast and crew took to calling his masterwork "Mangoes: The Cans of Fruit" behind his back.

Nobody was paid. Jackey Heyman, who played little Debbie, was given a bike for her troubles. The dogs in the movie were each given a bag of kibble. The rest of the participants were given "shares" of the expected profits, which, of course, never materialized. 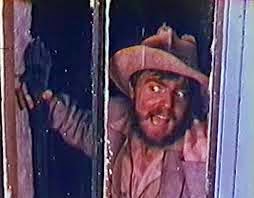 "Heeereees Torgo!" John Reynolds in one of his more lucid moments in "Manos: The Hands of Fate".

The twitching, jerking, halting performance of John Reynolds as the charming Torgo, meanwhile, was NOT based on Reynold's talent as an actor or Warren's direction. Instead, they were a by-product of the acid he frequently dropped during production.

Never the less, when "Manos" had its gala premiere director/producer/actor/writer Hal P. Warren expected a big hit. He even came to the event in a limo. But when the audience began laughing and heckling his masterpiece, Hal slipped out to avoid embarrassment. Other cast members followed suit. However, a woman recognized Warren and, offended that little Debbie was made one of The Master's Mrs., walloped him across the face with her pocket book! (You go, girl!) In fact, "Manos" was such a resounding dud that Warren was unable to interest anybody in his next project, "The Wild Desert Bikers."

"Manos The Hands of Fate" would have continued to gather dust on some obscure shelf if the geniuses at "MST3K" hadn't gotten a hold of it. Broadcast on January 30, 1992, "Manos" was considered so wretched by the writing staff, that they struggled to come up with the requisite quips, cracks and jokes that the show was famous for. In their Amazing Colossal Episode Guide, the "MST3K" staff considered "Manos" the worst movie they ever featured. However challenging "Manos" was to write for, the "MST3K" crew did a bang-up job and the "Manos" episode became one of their best and a fan favorite, too.

Which just goes to prove you can't keep a good "Manos" down.


The author wishes to acknowledge Wikipedia and IMDb for research support. The author owns a copy of  Mystery Science Theater 3000: The Amazing Colossal Episode Guide and has read it so much its held together by rubber bands.