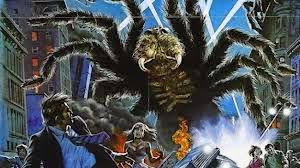 Run for your life! It's artwork from "The Giant Spider Invasion!"

Oh my God! Look up in the sky! It's a bird! It's a plane! It's...a golf ball from outer space? A giant splinter from outer space? Well, whatever the hell it is, it's speeding (moderately) towards Earth! And it crash lands in rural Wisconsin! And it brings forth...a bunch of rocks? And nesting inside those rocks are...spiders?

Thus begins "The Giant Spider Invasion" (1975), a low-budget howler lovingly conceived, co-written, produced and directed by Bill Rebane, the man who gave us "Monster A Go-Go" (see my review "Monster A Go-Go' I One Go-Go Gone Flick").

How can we ever thank him?

The many, many hilarious delights of "The Giant Spider Invasion" begins with its stellar cast, a group of actors who are familiar faces from 1960's TV. These actors were never stars, yet they never embarrassed themselves, either...until they reported for work on this flick.

First up is Alan "Skipper" Hale, Jr. as the jovial Sheriff Jones. He is ably supported by Barbara "Della Street" Hale as Dr. Jenny Langer, a local scientist and devoted pant-suit wearer. Next we have Robert Easton as filthy redneck farmer Dan Kester, who is miserably married to Leslie Parrish, his consistently soused spouse, Ev. 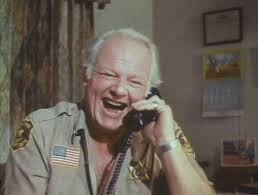 Alan Hale, Jr. yucks it up as jovial Sheriff Jones. 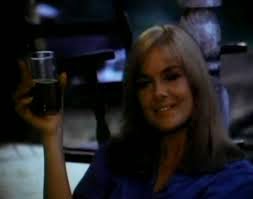 Leslie Parrish drinks it up as lush Ev. 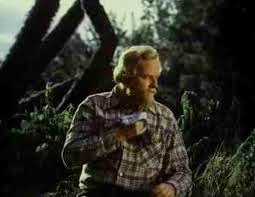 Robert Easton sweats it up as Dan.

All these folks converge in a small, rural Wisconsin town where everybody knows your name. One typical small town Saturday night finds a hell-fire-and-brimstone preacher (who looks like an unhinged Bruce Dern) headlining a revival meeting, while Dan sneaks off to an assignation with bombshell waitress Helga (Christine Schmidtmer), just as Dave picks up Ev's younger sister Terry for a night of sweet necking.

Then there is a crash, an explosion, a freaky light show and a violent wind storm in rapid succession. The point of impact is the Kester farm, but the bickering Dan and Ev don't check things out until mornin'.

What they find is a crater the size of a swimming pool. And dead cattle. Hideously slaughtered dead cattle. And rocks. Weird space rocks. Little do Ev and Dan realize, those rocks carry space spiders, the shock troops for a giant alien spider invasion...which takes its own sweet time to get going.

Instead, viewers are treated to a low rent "Who's Afraid of Virginia Wolf?" bicker-fest, as Dan insults Ev ("You're so dumb, you wouldn't know rabbit turds from Rice Krispies!"), Ev insults Dan right back ("The only way I know you're alive is when I hear you flush the toilet!") and the crackers' mistaken impression that the sparkly rocks lining the inside of the space rocks are "real diamonds."

A far more congenial couple is Dr. Langer and Dr. Vance. They "meet cute" at her observatory, where Dr. Vance says he has "an appointment with her father." When Jenny says her pa died "in 1962", Vance replies, "I'm sorry. So the appointment must be with your husband." Then Jenny coyly states that she's not married, which causes Vance to grin and say, "I'm not sorry." Finally, Jenny makes it clear that she is the visitor Dr. Vance has come to see. With the sexual tension ready to boil over, Jenny offers Dr. Vance some tea. 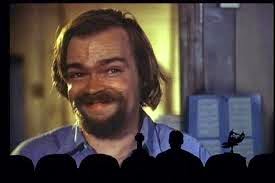 Meet "Cousin Billy": He's even more repulsive than you think.

At the lab, the doctors scrutinize Jenny's data and try to figure out what it all means. "I've never seen such fouled out data in my whole life!" Dr. Vance declares. Then they head over to Dutch's Cafe, where the elite meet to eat, to confer with Sheriff Jones. They later decide to hire a helicopter to take photographs of the impact site and check out possible radiation levels.

Meanwhile, back at the Kester farm, the house is suddenly over run with spiders--so much so that marathon drinker Ev even manages to blend one into her Bloody Mary. Eww! That evening, the desperate housewife opens her top dresser drawer and is attacked by a mid-sized furry spider sock puppet. Shrieking like a dental drill (and clad in only a blouse and panties), Ev runs pell-mell into a dark, dank, dirty garage for safety...where a afghan with pop-eyes is thrown on top of her.

And that is the end of that.

Ev is just the first in a line of giant spider casualties. The odious "Cousin Billy" is next, after the alien spiders force him to drive into a garage that promptly explodes. (My guess is Cousin Billy's greasy hair caught fire.) Poor Terry (also scantily clad) is attacked by alien spiders in her bedroom. In fact, the ramshackle Kester house collapses under the weight of a giant spider with googly eyes, which was resting on their roof.

Perhaps the worst death belongs to redneck adulterer Dan. Out in the fields searching for more space rocks, he fails to notice the king-size spider puppet creeping along behind him. The alien spider pounces on Dan, crushes him to death and then proceeds to suck...perhaps inhale is a better word choice...the cheese-head through his...her...its...how to put this tastefully...hinder. 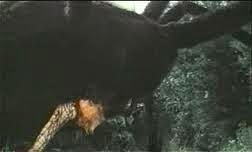 "He Died As He Lived": Dan meets an untimely end.

From that point on, "The Giant Spider Invasion" ramps into full monster movie mode. You know, stampeding hordes of horrified citizens; gun totin' yokels eager for battle; police officers trying to contain the crowds and/or begging for back-up; victims bleeding in the streets; eye witness accounts of the menacing horror ("You know that shark in 'Jaws'?" Sheriff Jones screams into his car phone, "Well, (this spider) makes it look like a goldfish!")--you know the drill.

Of course, the terrified screams of the movie's hapless extras MIGHT be more believable if the F/X weren't so laughable. Simply put, the giant spider causing all the trouble is actually a big, furry rug with huge ping-pong eyeballs and pipe cleaner legs draped over a VW Bug. In fact, when the "giant spider" crashes a county fair--and totally disrupts a Little League baseball game--it's clear that among the "fleeing residents" are about seven extras clearly dragging the critter along with ropes!

Indeed, director Rebane dubbed his movie "The Giant Spider Disaster" because of so many glitches behind the scenes.

For example, the movie makers envisioned a scene where a house would collapse when a "giant spider" hopped on its roof. Techs had a giant spider loaded on a crane; when they placed the bugger on the roof, a bulldozer was to simultaneously pull the house down. Unfortunately, when the spider landed on the roof, its "legs" stuck straight up in the air--and nearly impaled the the crew members inside! Even worse happened when director Rebane tried to stage a scene where a giant spider was suppose to burst into flames. First, the spider was covered in gun powder. Next, crew members in tree dropped a lit match on the critter. Nothing happened. A second match was dropped. Nothing happened again. Then, the book of matches was lit and tossed on the critter. Nothing. Frustrated, Rebane--who had the camera cranked up to a very fast fps to capture a 'slo-mo' effect--turned his camera off. Suddenly the giant spider burst into flames, burning the hair off the crew members and starting several brush fires too boot. 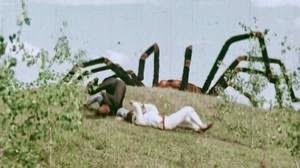 Vance and Jenny lose their footing (and their dignity) when surprised with a giant alien spider.

Made for the comparatively thrift price of $250,000, "The Giant Spider Invasion" was one of the top fifty grossing films of 1975. After running three times on the ABC network, the flick languished in obscurity until the fine folks at "MST3K" got a hold of it. The rest is bad movie history.

This is where I leave you, movie lovers. I can think of no better way to ring in 2015 than spending time with Della Street and the Skipper from "Gilligan's Island" as they battle giant sock puppets and a VW Bug draped in a furry afghan with ping-pong eyeballs in 100 degree heat in rural Wisconsin, can you?

Happy New Year, and of course, save the movies!