Oh My Greek Gods! It's Hercules! 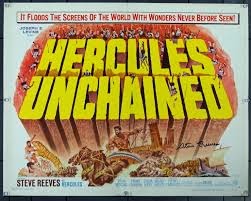 Say, have you heard the good news? There will be two--count 'em two!--big screen Hercules movies this year! The first, called "The Legend of Hercules", opens this month. It stars Kellan Lutz from those nutty "Twilight" movies as Herc. So far, the reviews have been atrocious--I can't wait to see it! The second, coming out this summer, stars that master thespian "The Rock". Want to make any bets on how bad that flick will be?

I plan on writing my own post about "The Legend of Hercules" once I experience director Renny Harlan's Velveeta cheese combo platter myself. Until I can squeeze that flick into my schedule, I consoled myself with watching two--count 'em two!--Hercules movies from the glory days of drive-ins: "Hercules Unchained" (1959) and "Hercules vs. The Moon Men" (1964).

The first stars a pompadoured Steve Reeves in the title role. In fact, it's a sequel to 1958's "Hercules", which started the whole Hercules movie stampede. "Moon Men", on the other hand, featured Alan Steele as Herc, battling an evil queen in cahoots with aliens.

Which one of these flicks is the better of the two? Let's compare and find out! 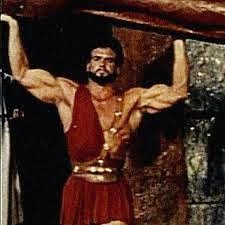 Steve Reeves is "Hercules Unchained". Not only is our hero ripped, he shaves under his arm pits, too. 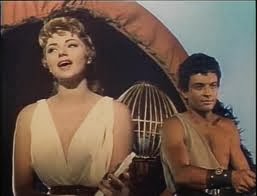 Next up, Herc and the gang find themselves in a cave in Thebes. Princely brothers Eteocles and Polynices are bickering over who should be king. Herc and Ulysses agree to fetch a mediator to settle this dispute.  That means poor Iole is forced to cool her heels in the Theben palace until they return. When the duo stop for lunch, Herc inadvertently drinks from "The Waters of Forgetfulness". Soon after, soldiers arrive to deliver Herc and Ulysses to Queen Omphale of Lydia (Sylvia Lopez).

With her blinding red hair, generous figure, skin-tight gowns, ornate jewelery and Mary Kay make-up, Omphale is a cross between Mae West and Tammy Faye Baker. She's also crazy about Herc. In fact, with Herc gulping down goblet after goblet of "The Waters of Forgetfulness", Omphale has no trouble convincing him he's her hubby--and the two engage in several epic make-out sessions to prove it. 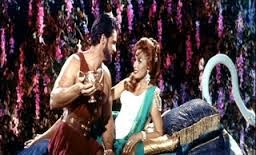 Thanks to "The Waters of Forgetfulness", Queen Omphale has Herc right where she wants him.

Unfortunately, the queen is a fickle gal. When she tires of her current cuddlemate, she has him killed and dunked in a bubbling vat of goo. After they become a wax figure, Omphale then displays them in her own private museum. Naturally, the queen has plans to do the same to Herc, but in the meantime she just plans to keep doing Herc.

Ulysses, meanwhile, has been passing himself off as Herc's mute slave. He knows all about Omphale's private wax museum and is doing his level best to hustle them out of Lydia. To that end, Ulysses weans Herc off "The Waters of Forgetfulness" and tells him of his "wife's" evil plans.

Back in Thebes, poor Iole does needlepoint and pines for hubby Herc. Little does she know, her hosts Eteocles and Polynices are mad as hatters and never wanted Herc's diplomatic mission to succeed. Eventually, they plan to toss Iole to the lions! When she tries to escape and warn Herc, however, she's caught and imprisoned.

The last act of "Hercules Unchained" is a bit confusing, so please follow along carefully.

Finally cured from "The Waters of Forgetfulness", Hercules realizes that Omphale is both a fibber and a whack-job. He tells the queen off and she breaks down in tears. Then Omphale admits that she's always been in love with Herc, even though she hated herself for it.(?) Before Herc stomps off for good, however, Omphale reminds the married demi-god that they went all the way a lot and, what's more, he totally enjoyed every minute of it--waters of forgetfulness or no-- and NOBODY "not even the gods" can deny it. After her little speech, Queen Omphale saunters off and throws herself into a vat of bubbling goo.

That plot point dispensed with, Herc meets up with a search party of friends. Together they battle Omphale's guards, escape and sail back to Thebes. That's when the strongman learns his diplomatic mission was bogus and that Iole is in danger. 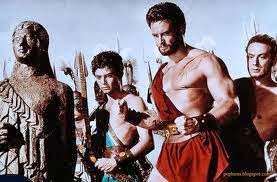 Street Fightin' Man: Hercules and his supporters are ready to rumble.

Once back in Thebes, however, the nutty brothers Eteocles and Polynices try to off Herc by dispatching three beautiful tigers to kill him. Boo! (I love tigers). When that fails, the brothers (who each sport identical bowl hair cuts) vow to push Iole off the palace parapet.

Before that happens, the brothers get into one of their many fights. To settle things once and for all, Eteocles and Polynices decide to duke it out in an arena to the death. Unfortunately, the brothers mange to kill each other.  Their demise creates a power vacuum and another tyrant steps in to declares himself King of Thebes. This means that Herc and his band of hardy supporters must battle another bad guy and his hardy band of supporters. Of course, Herc being a demi-god (and the star of the show) wins the day. The job of ruling Thebes, however, is finally decided by a special election and the wise old sage Creon wins the kingship.

Herc and Iole are finally reunited. She must have heard about hubby's extensive mattress bouncing with Queen Omphale, yet Iole forgives Herc. When Hercules suggests that being married to a demi-god is too much for a mortal woman, Iole disagrees. "Hercules Unchained" thus ends with Herc and Iole vowing to love each for forever and getting all kissy-face. Awww. 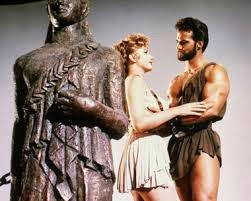 Can This Marriage Be Saved? Putting the evil machinations Queen Omphale behind them, Herc and Iole take up their marriage where they left off now that "Hercules Unchained" is over.

The main problem with "Hercules Unchained" is that so much going on, you practically need a flow chart to keep everything straight. After all, there are brothers angling for a royal throne, a serial killer queen, a bogus diplomatic mission, a separated newlywed couple, several big battle scenes, a floor show and "The Waters of Forgetfulness." Whew! Like Queen Omphale's make-up, the screenwriters laid it on a bit thick.

And speaking of Queen Omphale, it's never really explained why she kills and then makes wax statues out of her cuddlemates. Did she want to prevent them from blabbing behind her back once the romance was over? And if she wanted a souvenir to remind herself of each relationship, why didn't she just keep a pair of the guys' underwear? Killing them off seems a bit extreme to me.

However, if there is one thing "Hercules Unchained" does do right is show how a hereditary monarchy is simply no way to run a country. When all power and influence is reserved for one position, and that job goes to the oldest male, is it any wonder there are problems? And besides, who says the designated heir is up to the task of ruling? So it's not surprising that brothers Eteocles and Polynices were at each others' throats. Let's hope wise old Creon convinces the people of Thebes to ditch the monarchy and adopt a representative democracy.

So that, dear readers, is "Hercules Unchained." Tune in next time, when I discuss "Hercules vs. the Moon Men" and then decide which is the better flick. Until then, Save The Movies!