Get Him To The Greek: It's "Hercules Vs. The Moon Men"! 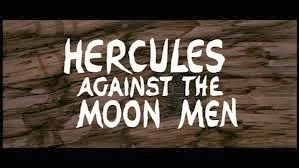 Welcome back, movie lovers, to our Hercules double-header!

In preparation for watching Renny Harlin's "The Legend of Hercules", I viewed "Hercules Unchained" with Steve Reeves. Now it's big, beefy Alan Steele's turn in 1964's "Hercules Vs. The Moon Men".

And away we go!

Queen Samara (Jany Clair) appears to have everything a gal could want: she's a queen, she's rich, she never sports the same hair style twice. But is she satisfied? Of course not! Queen Samara wants to be more than the ruler of some dinky kingdom; she wants to rule the world!

Lucky for her, a group of aliens from the moon crash land in her neighborhood. They set up shop inside a mountain with their comatose queen, Selene. It's the moonies hope that they can revive their ruler through blood transfusions. Queen Samara then strikes a deal with the aliens: she will provide them with human sacrifices (i.e. her subjects) and, once their queen is up and around, the moon men will make her the boss of everything. And she'll be rich. And "her beauty will never fade", either. 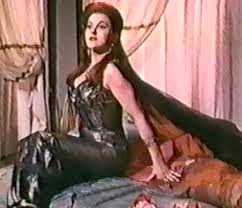 She Who Must Be Obeyed: Queen Samara 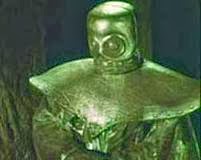 Bad Moon Rising: The leader of the evil Moon Men. 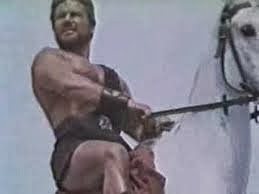 The citizens of Samar, who were never consulted about this arrangement, are understandably upset. They call the alien's mountain hideaway "The Mountain of Death" and resent having to fork over their kids to be killed. Revolts have failed, so the beleaguered citizens have sent for famed do-gooder Hercules (Alan Steele).

Of course, the plot of "Hercules Vs. The Moon Men" isn't as simple as all that. There is a sub-plot about Queen Samara's kid sister Billis, who is in love with the noble Darix. These two smitten kittens want to marry, but the queen keeps putting off the wedding. Why? I'm not sure, but I think the fact that Billis is a dead ringer for the Moon Men's Queen Selene--and Samara has promised to deliver Billis to the aliens--might have something to with it.

Also pining away is Herc, who has developed a thing for lady-in-waiting Agar. After all, it was Agar's pop, diplomat Gladius, who alerted the strong man about kingdom of Samar's troubles. Alas, Gladius' role in the flick is unexpectedly cut short when he's skewered to death while leading Herc through an underground passage way.

Queen Samara, meanwhile, is not exactly lacking for male companionship, either. Around her neck she wears a vial that contains "love powder". See, Samara sprinkles it in a guy's drink (secretly, of course) and once he gulps it down, he's instantly transformed into the queen's "love slave." Needless to say, the crafty queen plans to pull this stunt on Herc, but he's already on to her (actually, a local guy warned him ahead of time). 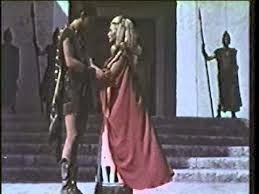 Couple Number One: Darix and Billis. 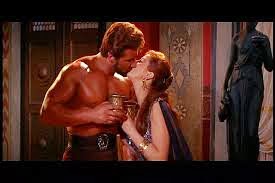 Interestingly, before Queen Samara turns Herc into her "love slave", she does her level best to kill him. First, she tries to off Herc with the help of an ugly ape man whose lower teeth curl up into pointy tusks. When that fails, she has the strongman pinned between two boards that are studded with knives. After Herc manages to survive even that, the queen hustles him up to her boudoir to join her for a "love powder" cocktail. When she's not looking, Herc spits it out, but he still does do a convincing job of pretending he is, indeed, Samara's "love slave."

Now, don't worry, we haven't forgotten about the Moon Men. Just as they predicted, the moon finally moves into the Seventh House and Jupiter does align with Mars. Unfortunately, peace WILL NOT guide the planets and love WILL NOT fill the stars. Instead, a huge, gigantic, epic, like, totally BIG sand storm engulfs Samar--and the movie. Fans of "MST3K" will recognize this sequence in "Hercules Vs. The Moon Men" as "Deep Hurting."

And, indeed, for at least 20 minutes viewers are treated to endless shots of gale force winds, swirling sand and hapless cast members staggering around, bumping into trees, tripping over rocks and crawling on the ground as if they were searching for a lost contact lens. As if that wasn't enough, additional scenes of poor Billis--who has been handed over to the Moon Men--having her blood drained and look-a-like Queen Selene--who is slowly batting her heavily mascaraed lashes as she comes to life--are also spliced into the afore mentioned footage.

Point Well Taken: Hercules struggles manfully not to become a pincushion for the evil Moon Men.

Poor Billis (Delia D'Alberti) is slowly having her blood drained by the Moon Men. This is D'Alberti's best acting in the flick.


However, don't give up hope just yet. Herc manages to crash the Moon Men's party at the last minute. He knocks down the moonies' guards (walking Gumbies that are made out of solid rock that actually resemble those sugar wafer cookies) and socks the head Moon Man right in the store. Then he sweeps Billis into his beefy arms before "The Mountain of Death" collapses in on itself (In case you were wondering, Queen Samara is flattened to a pancake by the rock Gumbies for failing to off Herc). Alas, denied Billis' blood, Queen Selene turns to dust and blows away.

Free from the evil machinations of both Queen Samara and the Moon Men, the people of Samar can now relax. Derix and Billis marry. His work finished, Herc plans to ride off and aid others in distress. Before he goes, however, Hercules asks Agar to join him. She jumps gleefully into his arms and they ride off into the sunset. On this joyous note, "Hercules vs. The Moon Men" ends its broadcast day. Good night and good luck.

In the name of full disclosure, I should report that Alan Steele's name is not Alan Steele. It is Sergio Ciani. Furthermore, his character is not really Hercules, per se. He's actually Maciste, a hero from silent Italian movies who is similar to Herc, but not actually the Greek strongman of myth. It was the American distributors of this flick who decided to rename the hero Hercules. See, they knew the name Maciste would mean nothing to US ticket buyers, thus they changed it to Hercucles, which everybody knew. Since the producers weren't worried about this verbal slight of hand, we shouldn't be, either.

Although they are clearly different movies, "Hercules Unchained" and "Hercules Vs. The Moon Men" had several key plot points in common. Both films took place in lands ruled by corrupt nobles. Both films starred big beefy guys in the title role. And both films featured female Blue Beards--who both had red hair! But which is the better flick?

I vote for "Hercules Vs. The Moon Men."

I like Alan Steele/Sergio Ciani as Herc. He seems friendly and helpful; he's more down to earth than Steve Reeves. I also like the Moon Men and their rock Gumbies. The lengthy sand storm I could have done without, but, over all, I felt "Hercules Vs. The Moon Men" had a tighter control over its narrative.

I do worry about Herc and Agar, though. I mean, Agar didn't even pack an over night bag--she just climbed onto Hercules' horse and off they went. I hope they at least stopped at the next town and picked her up a change of clothes and some clean underwear.

Come back next time movie lovers, when I plan to share my views on the big screen shlock-buster "The Legend of Hercules". Until then, help me SAVE THE MOVIES!