Artemisia: No Chicken Of The Sea

Hello, boys: Persian naval commander (and Versace couture fan) Artemisia storms onto the scene in "300: Rise of an Empire".

A fine hello to you and yours, movie lovers, and a belated happy St. Patrick's Day, too.

Recently I traveled to my local movie theater, plunked down a king's ransom ($7.50!) and subjected myself to "300: Rise of an Empire", Noam Murro's not-exactly-a-sequel, not-really-a-reboot, some-kind-of-continuation of Zack Snyder's 2007 hit "300".

In a nut shell, "300 Plus" (as I like to call it) is a CGI 3-D extravaganza which features more blood, guts, stabbing, impaling, kicking, biting, scratching, hitting, punching, beheading, whipping, screaming, burning and eye gouging than any movie produced since 1912.

But stylized slow-mo gore isn't the subject of this review. No, the real focus of this article is the performance of Eva Green as Persian naval commander/good time girl Artemisia.

Simply put, Green's performance is the greatest acting ever done in the history of acting.

Her character is not merely a brilliant commander. She's also a master swords-woman, an Olympic caliber archer, a fiery orator and a Versace super model. Her life story (according to the flick) would also make her an interesting motivational speaker, should she decide to switch careers at some point.

When Artemisia was a little girl, her family was killed and her village razed by some Greek baddies. After being abused herself, Artemisia is chained on a ship and abused some more. In her early teens, she's then dumped to die on some forgotten street. That's where "a Persian emissary" scooped her up, nursed her back to health and trained her in the arts of war. 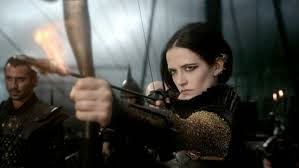 Artemisia takes dead aim at the hapless Greeks in "300 Plus".

Artemisia quickly rises through the ranks of King Darius of Persia's navy, where she regularly swipes off the heads of defeated commanders and lovingly presents them to her king as a Pick Me Up Bouquet.

Then one fateful day, King Darius is killed by Greek Gen. Themistokles (Sullivan Stapleton). His son and heir Prince Xerxes (Rodrigo Santoro) is totally bummed about this, but go-getter Artemisia sees it as an opportunity.

After the dying King Darius utters that only "the gods" can defeat the Greeks, Artemisia convinces Xerxes to become a god. So he undergoes a combination Black Mass and Mary Kay make-over to become "god king" Xerxes: bald, ripped, with tattooed eye brows, covered in necklaces, rings, chains, body piercings and flaunting a pair of jewel-encrusted bikini briefs.

Xerxes is now the Lady Gaga of god kings and he's ready to rumble.

Well, actually, Artemisia is the one ready to rumble, because it's she who wants to kick some Grecian fanny, not Xerxes, who is having too much fun voguing and being fabulous. 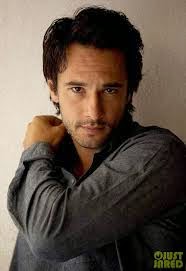 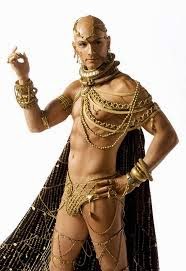 "God King" Xerxes after. Which do you prefer?(I like before.)

So Artemisia goes to war. Her most interesting battle is not with the Greek navy per se, but with hunky Gen. Themistokles. After one early skirmish that ends in a draw (I guess), Artemisia invites the general to her ship to (ahem!) "negotiate."

Next, they philosophize as to why they fight.

Then, Artemisia offers Themistokles the chance to (ahem!) serve under her.

In response, Themistokles rips off his toga. Artemisia yanks off her blouse. She plants a big, fat vacuum-packed kiss on Themistokles, nearly pulling his ribcage up and out his nostrils. Then the Greek slams the Persian on a table and rides her like Sea Biscuit at The Kentucky Derby. Seconds later, Artemisia body slams Themistokles on a table and rides him like Secretariat at The Kentucky Derby. She moans. He groans. Furniture is broken. Crockery is smashed. Above deck, Artemisia's guards, hearing the ruckus, exchange uneasy looks.

Just when you expect the duo to flash fangs and simultaneously sink them into each others' necks, Artemisia and Themistokles decide to take a breather. Instead of lighting up a smoke or enjoying the milky after glow, Artemisia once more asks the Greek general if he wants to join her navy. He says no, again. Miffed, Artemisia slaps Themistokles' mug and orders him off her ship. 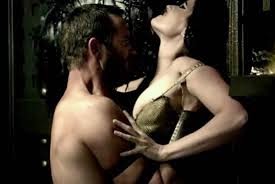 I could go on and describe the rest of the battles of "300 Plus", the flashing of swords, the squirting of blood, men screaming "ahh!" like they were having a baby. But all that CGI gore is no match for Eva Green. Unlike, say Bette Davis, Joan Crawford or Faye Dunaway, Green doesn't chew the scenery; her performance isn't camp. She is completely, utterly believable. Artemisia wants revenge and she wants it now. Watching Green do her stuff, you are reminded to two other great no-holds-bar performances: Tura Satana in "Faster Pussycat! Kill! Kill!" and Linda Fiorentino in "The Last Seduction".

Like Satana's notorious Varla, Artemisia's tongue is as lethal as her fists. "I did not come here to be a spectator!" she roars during one confrontation, brandishing her swords and jumping into the fray. Later, when Xerxes begins throwing his royal weight around, Artemisia reminds him who is really in charge. "You are king because of me!" she barks. "Now sit back on your throne with the safety I provide you." Then there is this little bon mot, spit out while she and would-be cuddlemate Themistokles battle it out in the movie's final minutes: "You fight harder than you f@#%!"

In "The Last Seduction", Fiorentino's Bridget forces a drug deal on her hapless medical student hubby (Bill Pullman) and then runs off with all the money, better to fund the lifestyle she wants in swanky but expensive New York. She is determined to keep every last cent and isn't above playing every man she comes into contact with like a fiddle at the annual saps convention. Just like Bridget, Artemisia is the smartest person in any room and she is equally determined to get her way. Survive a horrific childhood? Check. Become the best naval commander in Persia? Check. Manipulate Xerxes into being a fashion symbol so she can run the show? Check. Go to war and avenge Greece for the wrongs they did to her and her family? Not quite a check, but she comes pretty darn close.

Message to movie makers: if you create interesting characters and give them interesting things to do and say, you won't need to waste all that money on those hokey CGI effects. As Eva Green proves, a great character is the best special effect. Try it and see! Until next time, write better characters and save the movies!
at March 19, 2014 No comments: