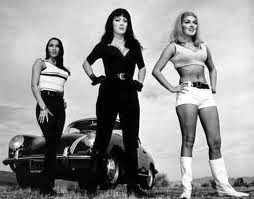 Rosie, Varla and Billie. Warning: These kittens do scratch.

OK, how's this for a nightmare scenario?

Are the clean-cut president of your local car club. You and your hyper-perky girlfriend Linda (Susan Bernard) are out in the California desert running some time trials.

Then you meet up with a trio of sexy, tough talking hipsters named Varla, Rosie and Billie. They challenge you to a friendly drag race; you unwisely accept. You race against Varla--who appears to be the leader of the pack--and she not only out runs you, her ferocious driving style nearly blows up your car's engine.

Then things turn ugly. Varla insults your masculinity. You answer back. Varla belts you in the chops. You attempt to hit her back, but she whips out some karate moves you hadn't counted on. Seconds later, you are rolling in the dust, having had your fanny thoroughly kicked.

But it's not over yet.

"I don't beat clocks--just people," Varla declares before snapping your spine like a brittle twig.


Now it's over, especially for you.

Ladies and gentlemen, welcome to violence.

Or rather, welcome to "Faster Pussycat! Kill! Kill!", the subject of the 100th post of this humble blog.

Exploitation filmmaker Russ Meyer made a biker movie--biker movies being all the rage in the 1960's--but was not happy with the final result. Then he got a brain wave: why not make a movie where the leads were strong, tough, sexually aggressive women? Go-go dancers instead of bikers? Drag racing, karate chopping go-go dancers with a gift for camp dialogue?

From such musings, history was made. 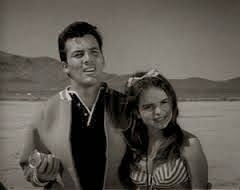 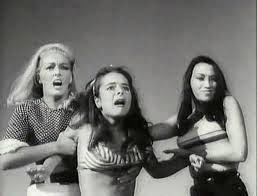 After: Billie, Linda and Rosie. "She just, like, totally killed my boyfriend!"

A mere recitation of the plot of this 1965 corker doesn't even begin to do it justice. You must see for yourself the over-the-top passion play that "Faster Pussycat! Kill! Kill!" is.
After Varla (Junk Cinema Icon Turan Satana) snuffs out car club president Tommy, hyper-perky girlfriend Linda goes bonkers. After tying her up and hushing her with a sleeping pill, Varla and sidekicks Rosie (Haji) and Billie (Lori Williams) drive to the nearest service station.
"What can I do for you today?" the goofy attendant asks.
""Just your job, squirrel!" Varla snaps. "Fill it up!"
However, it's at the gas station that the gals hear that ornery old coot Stuart Lancaster (a Meyer regular, who would later star in "God Monster: The Terror of Indian Flats" about a king-size mutant sheep) is hoarding a fortune of green in his run-down shack.
So Varla plots to use the hysterical Linda as bait to pilfer the cash. Surfer girl gone bad Billie signs on, especially after she gets a gander at the old coot's hunky but mentally impaired son (Dennis Busch, referred to in the politically incorrect fashion as "The Vegetable"). The gruff Rosie (who Meyer hints is Varla's cuddlemate) is not so sure. However, she always does what Varla wants (after all, she loves her).

"Are you girls nudists or are you just short of clothes?" the old coot barks when the tempestuous trio present themselves as weary travelers looking for water "to cool off their bombs(cars)." Picking up his scent like a bloodhound, Billie follows "The Vegetable" to his home-made gym. It's there she announces, "I'll be Jane and you be Tarzan. Let's grab a vine and swing!" 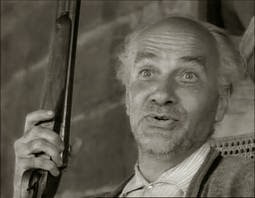 Before they can, ahem, "swing", the piercing shrieks of Linda ring out. Although he's stuck in a wheelchair, the nasty old coot Lancaster can still make an ugly advance on Linda, who has managed to run off. She's picked up by concerned driver Kirk (Paul Tinkas) who, it just so happens, is A) the dirty old man's older son and B) promptly drives Linda back to the very shack she just escaped from.
D'oh!
What follows next is a surreal sit-down lunch (prepared by Kirk) that must be seen to be believed. At the head of the table sits old coot Lancaster, who reveals that he's still bitter over his wife's death--and that he resents "The Vegetable" for being such a big baby that his wife expired trying to deliver him. Sitting across from each other are Varla and Kirk. She gives him endless lascivious looks and arouses him to no end by the way she eats her corn on the cob. The gruff Rosie simmers as Varla reels in her patsy. Meanwhile, Billie, endlessly trying to attract the attention of "The Vegetable", declares, "I'm of legal age for whiskey, voting and loving. Now that the next election is two years away and my love life ain't getting much better, how about some of that 100%?!" Lancaster happily fills her glass. Poor Linda, on the other hand, has yet another hysterical fit and conks out.

Kirk and Varla then slip away for a little afternoon delight. "You're a beautiful animal," Kirk pants as he and Varla practically swallow each others' tongues. "And I'm weak. And I want you..." As the two start rolling around in the hay, a resentful Rosie spies on them in dismay. Back at the shack, Billie has passed out, so the nasty old coot makes another ugly pass at Linda--and she manages to run off again. Fit to be tied about Billie's incompetence, Varla knifes her in the back. This so upsets "The Vegetable" that he stabs Rosie. That's all Varla needs to jump in her car and run the poor guy down. Kirk, suddenly aware that Varla is bad news, heads for the hills. The ornery old sidewinder meets his maker, too--and it's revealed that his large stash of green was hidden in his wheelchair. 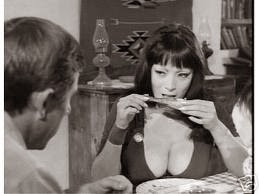 Varla understands that the way to a man's heart is through his stomach.

After helping herself to the green, Varla commandeers the old coot's truck and tracks down Kirk and Linda. While Varla is busy beating the stuffing out of Kirk, the bonkers Linda climbs in the idling truck and mows Varla down flat as a pancake.


The sympathetic Kirk comforts the unhinged youngster with this astute observation: "She wasn't human."


Can't argue with that.


Well, what can you possibly say after watching the surreal trash-fest that is "Faster Pussycat! Kill! Kill!"?


Meyer cast the right actors for these parts. Lancaster, as the mean old coot, is one of the meanest old coots in the movies. There is nothing redeeming about this guy, no secret ache that love or understanding could heal. He hates everybody, including his own kids, and women--especially women. "Women!" he rails. "They let 'em drive and smoke. They even put 'em in pants! And what do you get? A Democrat for president!"


If you close your eyes, you can picture Rush Limbaugh, Glenn Beck or Sean Hannity nodding their heads in agreement.


Tura Satana, in her skin-tight cat suit and Betty Page bob, is perfect as Varla. She can go-go dance, drag race, perform karate like Bruce Lee and snarl like Joan Crawford. She's a lean, mean killing machine and that's the way she likes it. "My motor never runs down," she announces at one point. "Wanna check under my hood?"


Varla's side-kicks are cut from the same cloth. Surfer girl gone bad Billie (Lori Williams) is completely guided by her ID.  No man, car or drink that is safe from her. Rosie (Haji) is a bit more understated, but just as deadly. "We don't do anything soft," she drawls. "Everything we do is hard."


In his own blinkered way, Meyer tapped into the mid-1960's sense that the world was going crazy, that traditional rules and roles were being upended--and it wasn't good news. Meyer's super-sized women-- who did what they wanted, feared no one and flaunted their sexuality-- visualized the dark side of feminism, as many people (especially men) saw it.


Of course, lots of people didn't realize Meyer was satirizing their fears, but subtlety wasn't his forte'.


INTERESTING TIDBITS ABOUT THIS FLICKS:

*Supposedly, Russ Meyer met Ernest Hemingway during WW II in a French brothel. Because Meyer was still a virgin, Hemingway paid for his hooker so Meyer could lose his virginity.


*Susan Bernard (Linda) was a Playboy playmate in 1966 and was actor Jason Patric's step-mom. 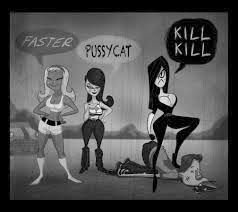