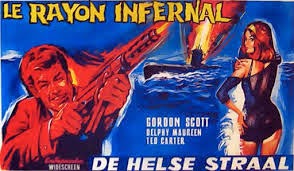 Hey, kids! Thinking about building a death ray for peaceful purposes? Think again! No matter how hard you try to keep everything honest and above board, somebody, somewhere, will always mess things up.

Of course, you don't have to take my word for it. Just ask Professor Jean Karl Michael.

He's invented a death ray FOR PEACEFUL PURPOSES ONLY and has invited a group of select European NATO types to a demonstration of this VERY PEACEFUL DEATH RAY. Things are going swell until some bad guys disguised as NATO types disrupt the proceedings. In short order, they kidnap Prof. Michael, snatch the death ray and then make a hasty get away.

I'm willing to bet these Euro-meanies have no plans to use the prof.'s death ray for "peaceful purposes", but that's just me.

How I Spent My Summer Vacation By Bart Fargo

Once world leaders/officials learn Prof. Michael and his peaceful death ray have been kidnapped, they call the only man who can save the day: Secret Agent Bart Fargo (Gordon Scott)! 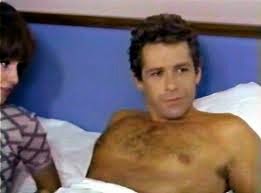 Unfortunately, he's on vacation and sound asleep too boot. So his boss Senor Raymond (Julio St. Cruz) sends two groovy chicks to Bart's hotel room to (ahem) "wake him up." Once delivered to headquarters, (which is never identified), Bart complains that he's "on holiday" and, like, can't someone else save the world this time? However, once the urgency of the situation is made clear to Fargo (and he's promised both a pay raise and an even longer vacation after he saves the world), Bart reluctantly goes back to work.

This upsets Bart's cuddlemate Miss Roberta, but even she agrees that the problems of two people don't amount to a hill of beans when a bunch of baddies of have a death ray. Thus, she reluctantly waves Fargo off to his mission and Senor Raymond orders her back to work.

On the plane over to Madrid, Bart flirts with Silvia Solar, an Italian fashion editor with an enormous bouffant. Fargo would like nothing better than to spend more time with Silvia, but he must follow a tip that "something is going down" at the Club Morocco. What he finds there is the most inept collection of no-goodnicks this side of the White House Plumbers. Their leader is a chap named Scarface (Carlo Hurtado)--so named because he has a scar he tries to hide with the world's worst fake beard. After battling these guys and engaging them in a roof-top chase, Bart--literally--drops into the studio of Lucy (Delfi Mauro), an Elizabeth Hurley-ish painter. After she hides Bart and shoos the goons away (GOON: "I'm looking for a man!" Lucy: "So am I!") a grateful Scott utters my favorite line in the movie: "I don't know who you are, honey, but Bart Fargo owes you a favor."

Hey, What Happened To That Peaceful Death Ray? 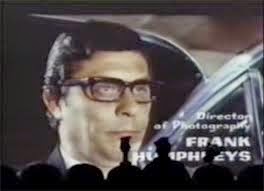 "Note to self: my face hurts." One of "Danger! Death Ray"s goon squad.


You are now probably wondering what happened to Prof. Michael and his "peaceful" death ray.

Well, they have been hustled onto a submarine, then taken to the booby-trapped villa of Alberto Dalbes, known as "Carver". Just who Mr. Carver is, where his money comes from and why he so badly wants the death ray is, alas, never explained.

Leaving that plot point for later, "Danger! Death Ray" focuses once again on Bart's popularity with the ladies. Besides Lucy (who never appears in the same hair-do twice), there is Silvia Solar, the fashion editor Bart flirted with a while back. She pops unexpectedly back into Fargo's life, insisting that she thought Bart's hotel room was hers. "The corridor was so dark," she explains, "I couldn't see."  The two have sex and then Silvia suggests they take a boat ride. While Bart is enjoying a smoke at sea, Silvia is sending signals with her futuristic compact. Hmmm, seems fishy. Then Silvia suddenly dives into the water--all the better for the movie's goons to blow up the love boat she and Bart were sharing.

Surprise! Silvia is in fact Mrs. Carver! Another surprise? Bart's not dead!

OK, this is getting old. Just what the hell is this all leading up to?

Your guess is as good at mine.

Back to the action. 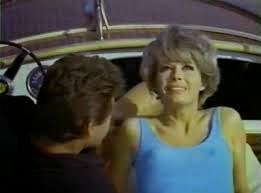 Gussied up in a tux, Bart next crashes a swanky party at Carver's villa. It's there he learns that Prof. Michael is being held at another villa. See, the poor professor refuses to show anybody how to operate his peaceful death ray. So the meanies shoot him up with a drug that turns him into a zombie. A zombie that will show Carver's goons how to work the death ray, to be precise. Lucy is there, too, but as a hostage.

While Bart races to this villa, he encounters various thugs who must be shot, stabbed, hit, kicked and otherwise dispatched. This takes a lot of time. Meanwhile, Mr. and Mrs.Carver are running around, trying to shoot Bart. Unfortunately, it's Mrs. Carver who gets gunned down instead. Mr. Carver, in a show of husbandly concern, dumps her body on the villa's steps.

Poor Prof. Michael eventually has the death ray all warmed up and ready to go. Mr. Carver strolls into the secret room where Lucy and Prof. Michael are being kept, casually flicks on his big screen TV and observes Bart skulking inside his villa. He then grabs his remote controls and begins shooting at the secret agent--the place is booby trapped, remember? Fargo looks to be a goner until Lucy unties herself and attacks Carver--or she tries too, anyway. FINALLY, Bart is able to break into the secret room where everybody is hanging out. He shoots Carver, deflects the death ray and ensures that the meanie Carver dies by falling plaster if the bullets haven't done the trick.

How I Learned To Stop Worrying And Love Bart Fargo

When next we see our hero, he's in his hotel room. Lucy is there, too, and they are enjoying a glass of champagne. Then Miss Roberta, Bart's cuddlemate back at headquarters, suddenly can be heard chirping via his futuristic wristwatch.

"Darling!" she exclaims. "Where are you? The plane to Majorca is about to leave!"

It is on this confusing note that "Danger! Death Ray" ends.

Has the death ray been destroyed? The filmmakers never tell us.

Has Professor Michael been given medical treatment? The filmmakers never tell us that, either.

Has Bart Fargo finally left on his much needed vacation? The filmmakers are rather mum on that, too.

Therefore, if the filmmakers are content to allow these plot points to fade into the ether, we should, too. After all, the movie is over, which is the main thing.

Bart Fargo prepares to knock some sense into two extras.

Nevertheless, there are just a FEW THINGS about "Danger! Death Ray" that deserve further examination.

First, the plot of "Danger! Death Ray" is strikingly similar to the plot of another Euro-James Bond type flick, "Secret Agent Super Dragon" (1966).

Both starred American actors in the secret agent/spy role. Both spies were trying to enjoy their respective vacations when they were unexpectedly dragged back to work. Both spies were "involved" with their boss's secretary and ended up hooking up with a new gal at the film's end. Both refused to say when they would end their vacations.

Next, "Danger! Death Ray" clearly had no budget for special effects. This is especially true in the case of the "submarine" and "helicopter" that whisks poor Professor Michael to Mr. Carver's lair.

While watching this flick, sharp eyes will note that the "sub" is actually a plastic tub toy, as is the helicopter. In fact, the scenes of the sub emerging from the ocean's depths and later streaming along to Mr. C's WERE CLEARLY SHOT IN A BATH TUB. Economical? Yes. Convincing? No.

Ditto the little red "sports car" of Bart's that careens off a twisty road. It is clearly a Match Box Special. My late brother collected thousands of Match Box cars, so I know one when I see one. Not bragging, just a fact. 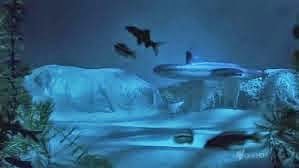 Bart Fargo: The Spy Who Bugged Me

Then there is the music chosen to accompany "Danger! Death Ray".

Basically, there are three tunes that are heard braying on the film's soundtrack: a bouncy instrumental piece that features a group of singers warbling "Ba (pause) upadupadada" over and over and OVER again; a funkier tune used for chase scenes that the old hands at "MST3K" insist is a riff on Herbie Hancock's "Watermelon Man"; and a ditty that sounds suspiciously like The Lovin' Spoonfull's "Did You Ever have To Make Up Your Mind?"

What does all this signify? That the people responsible for "Danger! Death Ray" couldn't come up with or afford an original score, so they cribbed some elevator music!

Last, there is Bart Fargo himself.

Gordon Scott, who appeared in five "Tarzan" films and a collection of "sword and sandals" epics in the 50's and '60's, is one of the MANY James Bond wanna-bes that have graced the silver screen over the years. He joins Ray Danton, Vince Edwards, Stewart Granger, Mike "Manix" Conners, Tom Adams and Neil Connery (Sean's kid brother) as pretenders for the James Bond throne.

However, Scott, though hunky, may be the least memorable of the bunch. He simply lacks charisma and charisma is the one thing a James Bond hopeful must have.

Of course, he was stuck in a low budget, confusing, Euro-spy flick with an irritating soundtrack and tub toys for special effects. Maybe dealing with all that sapped what charisma Scott had. It would sap mine, anyway.

In conclusion, it should be noted that "Danger Death Ray" is actually the English title given to this flick. Another title is "ll Naggio infernale" or "The Infernal Beam". My choice would be "Danger! An Infernal Movie!"