Editor's note: Hi-ho, movie lovers! Due to circumstances beyond my control, I was unable to post for a while. However, I plan to rectify this state of affairs by presenting a series of darn good articles on bad movies--starting now! 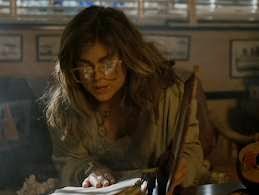 Poor Wanda!(Kathy Ireland, a regular Sports Illustrated cover-girl.) Her mother is dead. Her explorer father is never home. She has eyebrows that rival Eddie Munster's. Robbie (Don Michael Paul), her surfer-dude boyfriend, has just dumped her. AND she has a squeaker toy for a voice box.

Could things get any worse for this sad sack Valley Girl?

Of course they can!

After all, Wanda is the heroine of "Alien From L.A." (1988), a combination "Journey to the Center of the Earth" and "Romancing the Stone" churned out by the International House of Cheese better known as Golan Globus Productions.

While working her shift at the local drive-in, Wanda receives a letter informing her that her dad is missing and presumed dead. Even though she is afraid of planes, trains, automobiles, water and the sight of her own shadow, Wanda bravely trudges off to Africa to investigate.

It's there she learns that pops was working on the theory that the missing continent of Atlantis was actually an alien space-ship. When the ship crashed into the center of the earth, the aliens decided to make lemon-aide out of lemons and settle underground. Furthermore, successive Atlantis governments have gone to great lengths to ensure that future generations know nothing of the world above.

Now, any normal, thinking person stumbling upon this info would quickly conclude that dad was A) completely off his dot or B) sampling way too much of the local Hash product or C) a combination of both. Wanda, however, is neither a thinker or normal. Thus, she foolishly goes off in search of dear old dad herself--and promptly falls into the center of the earth which, is to say, Atlantis. 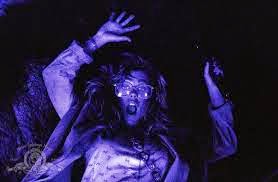 Wanda falls feet first into adventure! Leading lady Kathy Ireland's facial expression is about as animated as she gets.

The Atlantis Wanda tumbles into is a dark, dusty, sepia-toned Hell-hole where people dress in early '80's punk fashions. The major industries appear to be mining and pro-wrestling. Even worse, the inhabitants of this dust choked place speak in inexplicable "Australian" accents because...well...they just do. This must have been a deliberate artistic choice by the flick's director to encourage his cast to do this and, like every artistic decision concerning this flick, it turned out to be a bad one.

By far the worst Australian accent belongs to William R. Moses (best remembered for his stint on the prime-time soaper "Falcon Crest") as "Gus". Gus, you see, is a miner always hoping to strike it rich. As "Australian" men from the Outback are want to be, Gus is rough, tough and gruff--and he has no use for the simpering Wanda, even if she did help him fight off squatters to his latest claim. Chattering like a demented chipmunk, Wanda wears Gus down with her tale of woe and TO SHUT HER UP he agrees to help her locate her dad. 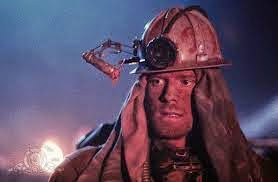 Crocodile Dundee? Nope. It's William R. Moses as "Gus", Wanda's "Australian" buddy from Down Under... down under ground, that is.

So off they go to "the City", where the streets are clogged with wild '80's punkers with teased hair and bad make-up jobs. Despite their government's fascist attempts to make sure nobody knows about the world above, Atlantians must be secretly watching reruns of "Solid Gold", because there is no other way to describe how these people look.

Naturally, a gal like Wanda is going to stick out like a sore thumb in Atlantis and she attracts two VERY different kinds of attention: from the government, which hunts down and executes any and all "aliens" and from the pro-wrestling industry, which is always on the look-out for people with "big bones". Trailing after Gus, Wanda is spotted by a Joan Jett-ish punk with really bad teeth (Janie du Plessis), who decides to sell her to crime boss Mambino (Deep Ray), a midget dressed like a 1930's gangster who flaunts red eyelashes that fall to his cheeks.

Did you get all of that?

To achieve this, the evil Joan Jett punker sticks Wanda with a hypo filled with stupid serum, while Gus nips off to make a phone call.

Aliens On The Run

Now, you are probably wondering, "What happened to Wanda's father? Is he even in Atlantis?"

Yes, here's there, being held in prison by female General Rykov, a baddie who dresses like Darth Vader, sports a black eye-patch and is prone to pulling faces like the Carol Burnette character "Nora Desmond". She's the one who believes if the civilization of Atlantis is found, the humans will enslave it's people "like trolls". The General is really intense about this. Taking a more even-handed approach is Consul Crassus (Simon Poland), who thinks the world above poses no threat to the world below.

Meanwhile, a doped-up Wanda is delivered to mob boss Mambino. If you're a fan of Kathy Ireland's SI covers and hope mini-me meanie Mambino will make her strip down and wrestle, well, tough tatters. Before Mambino can do anything to Wanda, Gus arrives to rescue her. In the ensuing chase, they get separated and Wanda meets "Charmin'" (Thom Matthews), an Australian without an Australian accent. He helps Wanda fight off Mambino's goons and, unlike Gus, isn't bothered by her irritating voice and even more irritating personality. 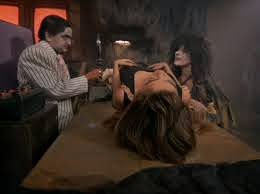 Crime boss Mambino and a Joan Jett-type punk haggle over the price of "big boned" Wanda. This is Kathy Ireland's best scene in the movie--because she's not talking!

Luckily, their romantic interlude is mercifully brief; soon Wanda is captured by the government's police and carted off to jail.

Finally reunited with her long-lost dad, Wanda is brought before the head honcho of Atlantis. This fellow is a Rastafarian gent who dispenses justice from a constantly rotating...Lazy Susan. Yes, you read that correctly. Don't try to understand it, just accept it. Anyway, whimpering Wanda stands before this fellow and pleads for her and her father's release. Just when you expect General Rykov to scream, "Off with their heads!" Gus bursts in to save the day. Truth be told, Consul Crassus helps out, too. So now Wanda, her dad, Crassus et. al. jump into Gus' schlep car--which he appears to steer with his feet. They arrive at a rocket/elevator and prepare to blast off when General Rykov arrives. She's about to arrest everybody when Consul Crassus busts her one right in the chops. "Bitchin' left hook, Crassus!" Wanda squeals. Then father and daughter blast off for home.

When next we see Wanda, she's a new person. She's no longer afraid, no longer nerdy, no longer needy. Proudly prancing around in a bikini top and sarong, Wanda sends surfer dude Robbie packing when he cravenly suggests they get back together. Then, as the sun is setting on Malibu Beach, a guy on a motorcycle slides up to Wanda. It's Charmin'! All the way from Atlantis! How did he get there? How did he find Wanda? Because she never bothers to ask, we'll never know. However, from the smile on Wanda's face, we're assured that these two are destined for a great and everlasting love...just as "Alien From L.A." is destined to go down in bad movie history as one the stinkiest slices of cinematic cheese the Golan Globas folks have ever churned out. 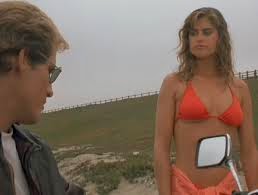 The new and improved Wanda grabs the attention of a passing motorist.

Perhaps the best review of  "Alien From L.A." comes from leading lady Kathy Ireland herself. When she and Gus wander into "the City", they slip into a local cafe for dinner. When their food arrives, it looks like a worm sandwich. Screwing up her face, Wanda declares, "Yuck!"

No truer words were ever spoken.