A British FBI Agent Takes On An Asian Drug Cartel In The German Spy Flick "A 009 Missione Hong Kong"! 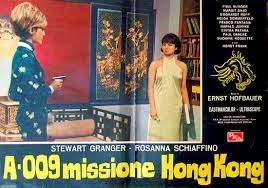 
Hey, kids! Do you want iron clad proof that Junk Cinema is truly an international phenomenon?

The subject of today's article--"009 Missione Hong Kong" (1965)-- is set in San Francisco and Hong Kong and stars a British matinee idol as an American FBI agent. The flick was produced, financed and distributed by a (then) West German production company. Furthermore, the movie was shot in German, dubbed into English and released under the titles "Code Name Alpha", "Red Dragon", "A 009 Missione Hong Kong" and "Das Geheimnis des drei Dschunken"--something for everybody! Eventually the picture made its American broadcast debut on a lowly Philadelphia late night TV show called "Chiller Theater"...in 1970.

Now, if you are a regular reader of this blog--because, hey, who isn't?--you may recall I did a piece for my webpage www.JunkCinema.com titled "Hey, Can I Interest You In Some Junk Bonds?" That article discussed several pretenders to the cinematic throne of James Bond. Included in that post was a flick entitled "Code Name Alpha", which I could not watch due to computer problems.

Well, I am delighted to report that the said computer problems have been solved and I have at long last been able to experience "Code Name Alpha"/ "Red Dragon"/ "A 009 Missione Hong Kong"/ "Das Geheimnis der drei Dschunken"...and can fully appreciate why this movie had moldered in obscurity for 49 years.

AUTHOR'S NOTE: If you want to read or re-read my "Junk Bonds" article, alas, you cannot. Someone HACKED www.JunkCinema.com and wiped out ALL MY MATERIAL.  Efforts to get the website up and running and retrieve my material have not been fruitful. Needless to say, I am ANGRY and HEART BROKEN that SOMEONE would do such a HORRIBLE ACT. I am not CitiBank or TARGET, for heaven's sake. I feel entitled to say this because IT IS BITTER AND IT IS MY HEART. 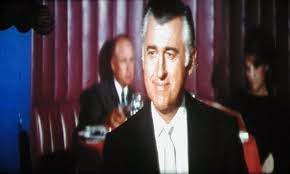 "A 009 Missione Hong Kong" begins in a park in scenic Hong Kong. A fellow greets a female colleague sitting on a bench--and she promptly keels over dead! Horrified, he races back to his office and begins typing madly--until he keels over dead, shot in the back a thousand times.

Turns out the stiffs were under-cover agents tracking a drug cartel. At FBI head quarters in San Francisco, the higher -ups know this means "something big" is about "to go down" and that means only one agent can save the day: Michael Scott (Stewart Granger, best remembered today for "King Solomon's Mines")!

Unfortunately, he's on vacation at the moment. Needless to say, Scott is not happy when head quarters rings him up at home. Still, when the urgency of the situation is made clear, Scott reluctantly puts down his martini glass and heads back to work.

It should be pointed out that, while still dapper, Stew is about 15 years too old to play a lean, mean fighting machine.

Also, "A 009 Missione Hong Kong" is the third James Bond wanna-be movie I have seen which begins with the secret agent/hero miffed that his vacation is needlessly interrupted in order to save the free world (check out "Secret Agent Super Dragon" and "Danger! Death Ray"). 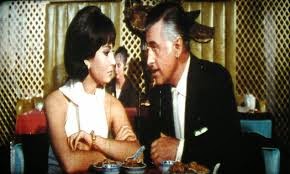 Rosanna Schiaffino as Secret Agent Carol: She can type, too.


Back to the action. Assisting Scott in Hong Kong is secret agent Carol (Rosanna Schiaffino). She's suppose to be the new secretary for pipe puffing Pierre Milot (Sieghardt Rupp) and his testy cuddlemate Blanche (Margrit Saad). These two reside in a fancy pants estate in a gated community and are involved in some kind of illegal smuggling/drug racket/ nuclear reactor parts business--the flick is a little vague about what, exactly, these guys are up to.

Oh, and they takes their orders from an all-knowing, unseen "boss".

Carol, meanwhile, is to type top secret messages for Pierre and keep in touch with Stew via her futuristic bracelet. Sounds risky.

Is This Anyway To Run A Top Secret Evil Organization?

OK, so we have an FBI man in Hong Kong, his female counter-part working under cover, a shady couple doing something illegal with drugs or nuclear parts and a mysterious "boss" giving orders over the phone. All that's missing is a resident jerk side kick for Stew. That part is played by one Harald Juhnke as "Smokey".

Now that all the James Bond-ish set pieces are present and accounted for, "A 009 Missione Hong Kong" gets down to business.

See, "A 009 Missione Hong Kong" is a rather dreary thrill-less thriller. The bulk of the movie centers on Stew trying to finger Pierre (and Blanche) as bad guys fronting for an evil organization. This involves Stew taking on the daring disguise of...an insurance salesman. Meanwhile, Carol is typing her little heart out...and never latches on to the idea that swiping and copying her pipe puffing boss' code book might explain just what the hell these no-good-nicks are into: Drugs? Nuclear reactor parts? Racy pictures of the FBI Christmas party? KFC's top secret "special herbs and spices" recipe? Or, God forbid, AMWAY? 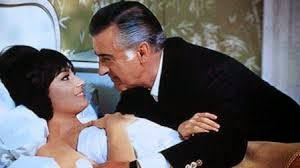 Of course, it doesn't help matters that every time "the boss" wants Scott and/or Smokey killed, their man in charge of such matters (Horst Frank, who resembles a really surly Frank Gorshen) keeps bungling the job. Drop a heavy box on Smokey as he checks out a pier? The contraption misses its target and Smokey dives into the drink. Give Stew and Smokey the wrong driving directions so hillside snipers can mow them down? Our heroes bail out of their car just the nick of time and hitch a ride back to town with a pick-up truck. Ambush Stew on a loading dock and throw a tire around him? Stew's body double handles these guys with a few quick judo chops.

Poor Frank just has no aptitude for this henchman/assassin line of work. He might want to consider other career options before his boss (or Stew) fires him permanently, if you catch my drift.

As all Euro-spy, James Bond imitators must, "A 009 Missione Hong Kong" ends with (gasp!) the mysterious "boss" being unveiled as a trusted character and (gasp!) all the principals being carted to a boat rigged with a bomb and (gasp!) a gun that doesn't work.

Will the recently revealed "boss" get away with murder? Will cohorts Pierre and Blanche get offed, too? Will secret agent Carol recover from her conk on the noggin to help Stew defeat the bad guys? Will idiot side kick Smokey and under cover Hong Kong policewoman May Ping (who was pretending to be Pierre and Blanche's maid!) arrive in time to save Stew and Carol from the inevitable bomb blast?

Is the Pope Catholic? How star Stewart Granger got through "A 009 Missione Hong Kong"? FBI Agent Michael Scott pours himself a little liquid encouragement.

Perhaps the best thing about "A 009 Missione Hong Kong" is its star, Stewart Granger. Even though he's stuck in a low budget, badly dubbed James Bond rip-off, Stew still manages to summon up his old Hollywood sparkle. He would have been better off cast as the head of the FBI or as the criminal master mind, yet he outshines all his co-stars by a mile. I hope Stew earned a nice chunk of change for this movie or at least got to keep some of the model trains his character is so crazy about for his grand kids--it's the least the producers could do.

After all, how many movies starring a British matinee idol cavorting in Hong Kong as an American FBI agent originally made in German and later dubbed into English with three different titles do you think there are, anyway?