The glitter! The glamour!The garbage! "Once Is Not Enough" has it all!

Hi keeba and hello, movie lovers. Fall is upon us and...what's that? You're feeling a bit down in the dumps? Is your boss a dink and your co-workers slackers? Has your spouse turned into a couch potato and your kids into crab apples? Has the impending marriage of George Clooney thrown you for a loop?

I feel your pain; I really do. More importantly, Junk Cinema feels your pain. Don't believe me? Well, then, let's revisit our semi-regular feature "If You Think Your Life Sucks, Please Watch..." and spotlight a cinematic potboiler especially made to lift your troubled spirits.

Today's feature presentation comes from the fevered imagination of Jacqueline Susann--the last word in big haired, high society swill. "Once Is Not Enough" is the hilariously shoddy "coming of age" saga about a dimwitted ingenue (Deborah Raffin) who learns the painful facts of life from such veteran scenery chewers as Kirk Douglas, Brenda Vaccaro, David Janssen and the vinyl-skinned, perpetually tanned George Hamilton.

Our story begins by introducing us to January Wayne (Raffin). Her father Mike (the chin-jutting Kirk Douglas) is a producer who has always provided his princess with a luxurious lifestyle. However, dad's career has hit a slump and January has spent three years in a pricey Swiss rehabilitation clinic after a near-fatal motorcycle accident. The net result is that dad is broke. Rather than humble himself and work in television, dad up and marries filthy rich, high society iceberg Dee (Alexis Smith). January, naturally, is horrified and wails to dad, "But do you love her?"

"It's not hard to feel a little something for a woman with all that money," Douglas shrugs. 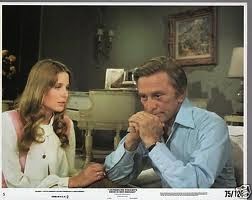 Deborah Raffin (January) and dad Mike (Kirk Douglas) console each other about being in a Jacqueline Susann movie.

Although they have just met, the imperious Dee insists that January be taught "to want the right things." So she buys all her step-daughter's clothes, redecorates her bedroom and insists that she date Wall Street whiz David (George Hamilton)--Smith's cousin and "New York's biggest stud." When she's not bossing or baiting people, Dee is excusing herself to play backgammon "with her friend Joan." In reality, Smith is sneaking off to tryst with her secret gal pal Karla (Melina Mercouri), a reclusive ex-movie star with an accent thicker than waffle batter.

Deciding to strike out on her own, January gets a researcher job at Gloss magazine, who's editor-in-chief is her boarding school buddy Linda Riggs (the raspy voiced Brenda Vaccaro). Once a plain Jane, Linda explains how she went from frump to fab: "I had a nose job, my tits were lifted, my ass was flattened and my knees were straightened." However, not everything was subject to the surgeon's knife. "My navel, I'm proud to say in untouched," Linda declares. "It's perfect."

With dad essentially a kept man, her new step-mother a bit AC/DC and her boss a man-devouring hyena, January runs the risk of coming off a bit dull by comparison. Perish the thought, because Susann has provided our blinkered heroine with a few INTERNAL CONFLICTS to spice her up.

The first INTERNAL CONFLICT is that January is a bit too fond of daddy. When Kirk picks her up at the airport after her Swiss sojourn, Raffin squeals, "You're gorgeous!" Later she exclaims, "I hope nobody thinks we're father and daughter. I hope they think you're a dirty old man and I'm your broad!"

"This isn't domestic champagne, is it?" George Hamilton (as "New York's biggest stud") prepares to put the moves on the hapless January.

Lucky for us, January's sexual initiation at the hands of Wall Street wolf David provides one of the flick's zanier highlights.

It goes like this: David invites January back to his swingin' bachelor pad. There is already a fire blazing, a round bed in clear view and Frank Sinatra crooning (hint, hint) "All the Way" on the stereo. Then David pours January a glass of champagne. "Oh-h-h Dom Perineum!" Raffin marvels. "That's for special occasions!"  Then Hamilton gathers January up in his arms and prepares to carry her off to the bedroom. He doesn't get very far. "Put me down," January commands. "I'd rather walk, if you don't mind."

Judging from their sour faces on the taxi ride home, it appears things didn't go too well. Thus, January and David decide to be "just friends", which is probably for the best.

So, if "New York's biggest stud" can't float January's boat, is there ever going to be a man who can wrest Raffin's heart away from daddy?

That's the cue for David "Harry-O" Janssen to roar on as the hard-drinking, barroom-brawling and very long winded novelist Tom Colt. He meets January outside a pub and slurs, "Pardon me, but I can't take my eyes off your ass." However, it's the man-hungry Linda who manages to get Tom over to her place. While Linda is off preparing for a night of pillow biting ecstasy with the famed novelist, Tom exits through a window and climbs up the fire escape to January's place. "Silicone tits and a computerized brain is not my idea of a sexy combination," Janssen explains between burps.

From this inauspicious beginning, Tom and January's romance blossoms. The happy couple ride bikes and visit the zoo and when Tom is hired to write the screenplay for one of his books, January joins him in LA. The only problem is that, well, Tom doesn't seem all that interested in, you know, S-E-X and Raffin starts to become, well, concerned. 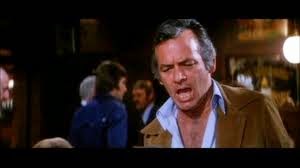 "Yes, I'm drunk! Stinking drunk! And I like it!" David Janssen bellows like a bull moose in "Once Is Not Enough".

Again, lucky for us, January's eventual "curing" of Tom and Janssen's explanation as to "why I haven't made it in years" is another zany show-stopper.

See, a few years ago, Tom's biological clock started ticking. Having racked up three divorces, no adoption agency would (sensibly) give him a tot. So Tom started shopping around for a baby mama and finds one in the form of (the unseen) Nina Sue. The couple duly marry, but the pressure to conceive a baby right away starts to drain Tom...well, he finds he can't...hmmm...it appears the great man of letters can't mate in captivity, so to speak. So Tom's best friend (an astronaut, mind you) suggests the couple under go artificial insemination. Tom agrees, reasoning, "Hell, if it works for sheep and cattle..."

The good news is that the artificial insemination cures the couple's childlessness. The bad news is that is only perpetuates Tom's...performance problems...because he's ashamed that his son was not created...from his own labors, as it were.

What does get Tom back in the game is January appearing in Janssen's shower. After this steamy interlude, the couple are inseparable--or so our heroine thinks. 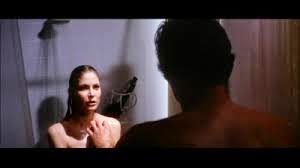 "Excuse me, do you have any conditioner?" January and Tom prepare to soap each other up.

In rapid succession, Douglas and Smith die in a plane crash. After the funeral, January learns she was left $ 3 million dollars in her step-mother's will. Hoping Tom will comfort her in her grief, he dumps her instead. "You gave a middle aged guy his last pretense of being a stud," Janssen slurs in his farewell kiss-off. "For that I'll always be grateful."

Now that's the way to end a lurid, soapy expose'! Don't you agree?

So you see, your life isn't so bad. Granted, you may be experiencing a rough patch now, but at least you're not an orphaned, semi-heiress who was cruelly dumped after curing your cuddlemate's impotence. Nor must you endure the fact that hack scribbler Jacqueline Susann based one of her tacky characters on you--like Barbara Hutton (Dee), Greta Garbo (Karla) and Norman Mailer (Tom) had to. Finally, I'll bet the last thing you'd say while sucking face with George Hamilton would be, "I didn't know men used hair spray!"

Until next time, cheer up and save the movies!