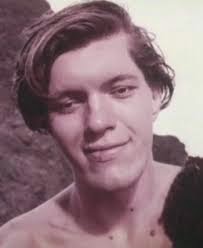 Richard Kiel in his break-out role as the lovesick caveman in "Eegah".

As you know, Junk Cinema lost one of its most beloved members, Richard Kiel, this week.

Although Kiel is best known to the general public as the villain "Jaws" from the James Bond epics "The Spy Who Loved Me" and "Moonraker", he was already well known to bad movie fanatics as the love struck caveman Eegah in the Arch Hall, Sr. mess-ter-piece "Eegah" from 1962.

Hall first met Kiel when he was a bouncer at a western bar. It was then that he concocted the story of local teen queen Roxie Miller (Marilyn Manning) stumbling on a forgotten cave dweller (Kiel) while tooling around in the Palm Springs Desert in her snazzy sports car. Hall played Roxie's father, "the noted" adventurer/writer Robert I. Miller, while her dune buggy driving, guitar strumming boyfriend Tommy was essayed by Arch Hall, Jr., the director's son.

Shot in record heat and hobbled by numerous technical difficulties (a member of the crew kept hitting "playback" instead of "record" during filming), "Eegah" nevertheless became a drive-in hit and launched Hall, Sr.'s mini-movie empire.

The best thing about "Eegah" is Kiel, who, at a reported 7 feet tall, was perfectly cast as the club-wielding cave man. Kiel would go onto other character roles, but it was his start in this Junk Cinema Jewel that made him immortal.

A new article on Troy Donahue is on it's way, but I could not let Richard Kiel's passing go unnoticed.

Goodbye, Mr. Kiel, thank you for everything!

Until next time, remember, save the movies!