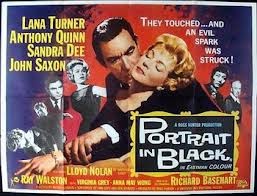 Say, have you ever been in love?

That kind of love.

Is this the look of love or... indigestion? Fun couple Shelia (Lana Turner) and David (Anthony Quinn) swoon into action.

So why don't they get hitched?

Thus begins "Portrait in Black" (1960), a way, way, WAY over-the-top melodrama which proves that murdering your husband can be hazardous to your health.

As mentioned earlier, Matthew Cabot is mean, miserly and dying--but not fast enough. From the sick bed of his snazzy San Francisco mansion, Matthew barks orders to his shifty lawyer Howard (Richard Basehart), bosses around his loyal secretary (the cadaverous Virginia Grey) and bullies his trophy wife Shelia.

"It's too bad they don't have a drug for your illness," Matthew sneers to Shelia at one point. "Love deficiency." 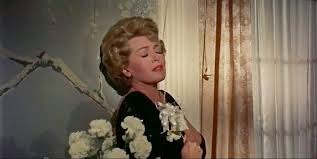 Lana Turner acts and acts and ACTS as the duplicitous Shelia.


David Riviera (Quinn) is Matt's doctor, regularly injecting him with pain killers. However, because he's so in love with Shelia, the medic is going batty waiting for his patient to kick the bucket. So the adulterous cuddlemates begin to wonder if there isn't some way to speed up the process.

But wouldn't that be MURDER??

The Matt-Shelia-David love triangle, however, is only the first course in this Velveeta banquet.

Meanwhile, down stairs at the Cabot mansion, chauffeur Cob ("My Favorite Martian"s Ray Walston)
his nursing some serious gambling debts and persistent loan sharks. Then there is the all-knowing, long-time housekeeper Tanni (silent screen icon Anna May Wong), who acts like Mrs. Danvers and dresses like Madame Chiang Kai-Shek.


Anything else? Oh, yeah, a possible longshoreman's strike is looming and miserly Matt wants it stopped.

Then one dark and stormy night, David arrives at the Cabot home to inject an air bubble into his patient. With Matthew Cabot now a stiff, Shelia and David can finally be together.

Err, no. See, among the letters of condolence arriving en masse to the grieving widow is the following note: "Congratulations on the success of your murder." Somebody knows what Shelia and David did--but who?

At this juncture, "Portrait in Black" ratchets up the tension--and the sound track. First, shifty lawyer Howard proposes to Shelia--the day after her hubby's funeral, no less. Shelia throws him out. Next, Blake storms into Howard's office, madder than a hen with wet feathers, because the towing contract Matt promised him has been unfairly terminated. Then David starts cracking under the pressure of keeping his evil deed a secret; he even begins to see Matt's corpse on his operating table! Finally, Shelia, never in the same outfit twice, begins to fret that David is "pulling away" from her.

What more could possibly happen? 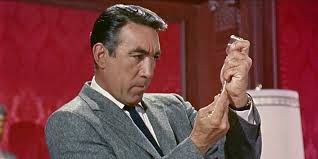 
Putting two and two together (and getting five) David becomes convinced that shifty lawyer Howard is the blackmailer. So Shelia lures him to the mansion, offers him a drink and later rebuffs him for getting fresh. This not only makes Howard mad, it allows him to realize that David and Shelia are an item. So Howard starts threatening Shelia...until David emerges from the shadows and plugs him full of lead.

In order to dispose of the body in Half Moon Bay, David insists that Shelia follow along in her car--except she can't drive! In fact, Shelia just got her Learner's Permit, an act that made hubby Matt hit the roof ("What? A car and driver aren't enough for you?!" he sneered.). Nevertheless, Shelia gets behind the wheel of a car, blinks back her tears and follows David down the wet, windy streets of San Francisco until David pushes Howard's car into the drink.

Whew! It's all over now, right?

A couple of days later, Shelia receives another note congratulating her on her second murder. It's this little missive that forces Shelia--dressed in a slinky black gown--to admit to David that--HOLD ON TO YOUR HATS--she sent the blackmail letters because she feared David might leave her!

Poor Quinn, realizing that he needlessly offed Howard, goes off the deep end--and how. Sweating bullets, rolling his eyes and yanking at his hair, David operatically wails about how he disobeyed the Hippocratic Oath and murdered two innocent, though unlikable, people. This display of over-the-top emoting is witnessed by a truly shocked Sandra Dee, who must have wondered how an actor like Anthony Quinn could allow himself to howl like a bull moose with a pine cone stuck up his...nose. You will, too, except Quinn's last scene is topped by his next scene: a desperate David chases Dee up the stairs, into her bedroom, out a window and onto a skinny ledge...where someone promptly goes splat. 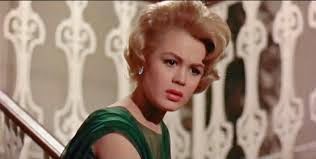 Sandra Dee seems genuinely puzzled by the goings-on in "Portrait in Black".


Can you guess who that someone might be? No? Then I'll give you a hint: it wasn't Sandra Dee.

And what is Shelia doing when all this is going on?

She's staring out a window, not a hair out of place, with the frozen expression people develop after standing in line at the DMV.

I mean, she assisted in two murders. Her cuddlemate is dead. The next stop is jail. This just hasn't been her day, has it?

Until next time, movie lovers, remember: murder can be deadly...and not just to your inconvenient spouse. After this corker, poor "Sweater Girl" Lana Turner was stuck in lower and lower budgeted dramas until she was forced to take LSD in "The Big Cube".

Talk about a bad trip...until next time, Save The Movies!