Is That A Giant Gila Monster Or Are You Just Happy To See Me? 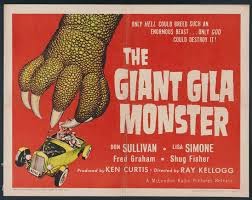 
Teenage love birds Pat and Liz are parked at a secluded siding on the edge of town, hoping to snatch a little "alone time." Then Liz looks up and screams bloody murder. No, her shot-gun totin' pa hasn't found their secret hide away. Instead, a gigantic paw/claw from out of nowhere stomps on the couple with an enormous "thud!", leaving them deader than door nails and flatter than pancakes.

Later, Sheriff Jeff (Fred Graham) is investigating the disappearance of the young duo. He checks in with Chase Winstead (Don Sullivan), the world's most responsible teenager and the go-to guy in this neck of the woods for absolutely everything. Sheriff Jeff (who is rather dim and forever complaining about how under-paid and under-staffed he is), asks Chase if his pals Pat and Liz were "in trouble" and ran off to get hitched.

No, Pat and Liz weren't "in trouble"; they were just the first victims of "The Giant Gila Monster", a B and W, ultra-cheapie, creature feature from 1959 about, well, a giant Gila Monster.

Actually, scratch that: the giant Gila Monster depicted in this flick is really a Beaded Mexican Lizard. Why the producers didn't engage a real Gila Monster is not known. My guess is the Gila Monster wanted more money and too many of those lavish "movie star perks" you're always hearing about. The Mexican Beaded Lizard, on the other hand, was probably willing to work for scale and had no problem sharing a dressing room. 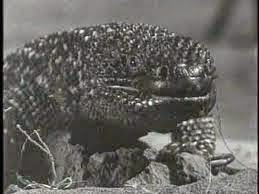 Ladies and Gentlemen, the star of our show: The Giant Gila Monster...who is actually a Beaded Mexican Lizard. 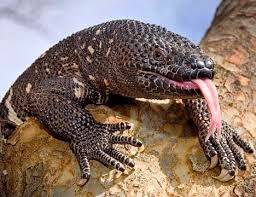 This, by the way, is a real Gila Monster (check out that tongue: Gene Simmons would be so jealous).

As mentioned earlier, it's only natural that Sheriff Jeff would come to Chase in his hour of need. Simply put, Chase is indispensable to his fellow citizens. How so? His ma is a widow, so Chase works part time at a garage and towing company to help support the family. His kid sister Missy needs leg braces, so Chase saves up the money to buy them. The local boys enjoy drag racing around town, so Chase forms a car club to keep 'em in line and teach them safety. When Chase's French girlfriend Lisa (Lisa Simone, a Miss Universe 1957 contestant) worries that her student visa will be unfairly revoked, Chase promises to iron out the bureaucratic tangles. And when DJ Horatio Alger "Steam Roller" Smith (Ken Knox) wrecks his car while driving drunk, Chase not only gives him a tow, but fixes his fender AND finds a place for the drunk DJ to sleep it off.

He also strums a ukulele or a miniature banjo, I can't tell which. 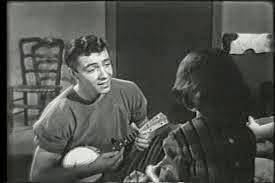 
OK, you are now probably wondering, "Auntie Beth, what about the giant Gila Monster? Isn't that what this movie's about?! I could care less about this widow supporting/leg brace buying/car club starting/visa saving/singing auto mechanic/high school student Chase!"

Hey, I hear 'ya, movie lovers. Unfortunately, "The Giant Gila Monster" does spend A LOT of precious screen time detailing the fruitless search for Pat and Liz, the antics of local drunk Harris (Shug Fisher) and the multi-tasking Chase. Meanwhile, the giant Gila Monster--actually a Mexican Beaded Lizard, remember--appears in random shots, waddling around the underbrush, looking for a clean place to pee. Of course, he's not really a giant: the critter is a regular sized fellow shot close up sauntering around, occasionally smashing into toy train sets and Match Box cars. He has NOTHING to do with the plot and NEVER interacts with fellow cast members.

Well, with an estimated budget of $175,000, the producers had to watch their bottom line very care-
fully. There just wasn't a lot of coin to toss around on fancy Gila Monster effects. In fact, "The Giant Gila Monster" was shot back to back with that other spine tingling classic, "The Killer Shrews", where dogs were draped with moldy afghans to resemble... killer Shrews (you'll be happy to know the cast in that movie escapes the Shrews by sneaking away in upside down rain barrels.). Also, director Ray Kellogg clearly intended to ratchet up the suspense in his flick by giving the audience just enough tiny glimpses of the giant Gila Monster so that when the critter was displayed in all his glory at the local teen barn dance, it would be REALLY scary, kinda like that scene in "Aliens" when the acid-for-blood beasties rampage around. 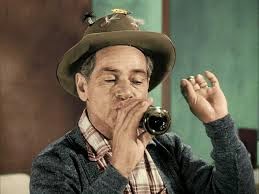 Drink 'Em If You Got 'Em: Lovable town drunk Harris (Shug Fisher) downs a cold one.


Actually, the scene with the Gila Monster crashing the barn dance is only terrifying because Chase is singing "Laugh, Children, Laugh" again.

As he has through out the movie, it's up to Chase to save the day. With the giant Gila Monster about to make a snack out of his sister Missy, Chase loads his precious jalopy up with nitro and sends it careening into the scaly critter. The monster catches on fire, blows up and Sheriff Jeff plugs a few rounds of lead into it for good measure. Everybody on screen is thrilled and relieved, mostly because Chase has no plans to sing.

It will probably come as no surprise to dedicated bad movie fans that "The Giant Gila Monster" was the brain child of one Gordon McLondon, a Texas gent who owned a chain of drive-in movie theaters. He decided to try his hand at producing films NOT because he had an artistic interest in the medium of motion pictures, but because he wanted all the flicks screened at his establishment to be double features. So why not cut out the middle man and produce his own stuff? Ray Kellogg, who was responsible for the film's "special effects", was given the opportunity to direct. Ken Curtis, AKA "Festus" on "Gunsmoke", was the producer of record.

Over the years, "The Giant Gila Monster" became a cult hit and a bad movie favorite, so I guess it worked out well for everybody--except the Mexican Beaded Lizard in the starring role. His star turn in "The Giant Gila Monster" didn't lead to better parts and he presumably quit Hollywood for good. Also hampering the critter's career prospects are some nasty myths about it, such as that its venom is more lethal than a rattlesnake's (untrue), that it can cause lightening by wagging its tail (not so) and that a pregnant woman will miscarry if they look at a Beaded Lizard (false).  Because of these tall tales, the Beaded Lizard was hunted into near extinction by the locals of Mexico and southern Guatemala. Today, it's a protected species, so it's getting a little over-due respect after all.