A Bloody Awful Mess Or Why "The Hunger" Never Satisfies 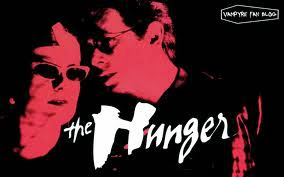 Catherine Deneuve and David Bowie are too sexy for "The Hunger"s VERY 1980's movie poster.

Say, have you ever met John and Miriam Blaylock? They are rich, handsome, chic and so very European. They reside in a fancy pants mansion in New York, play classical music duets, have perfect hair and never appear in the same outfit twice.

When "The Hunger" (1983) begins, Miriam (French movie legend and Chanel No.5 spokesmodel Catherine Deneuve) and John (Ziggy Stardust himself, David Bowie) are visiting one of those very '80's dance clubs. The place is crowded with people sporting leather mini-skirts, finger less gloves and hair adorned with porcupine quills. The posh couple make contact with a pair of swingers and bring them back to their elegantly appointed home. The swingers, naturally, believe they are in for an evening of sex and shenanigans. So imagine their surprise when Miriam and John slit their respective throats, slurp their blood and then casually toss their bodies into an incinerator when they are through.

Oh, did I forget to mention that John and Miriam are vampires?

John and Miriam are vampires.

Very rich, very chic vampires, mind you, but vampires none the less.

"Was it good for you, too?" John (David Bowie) and Miriam (Catherine Deneuve) wash up after draining the blood of their latest victims.


Although John and Miriam appear to be a happy couple, John hasn't been Miriam's only honey bunch over the years. See, Miriam is actually a 2,000 year old Egyptian vampire and her cuddlemates (who come in both genders) are humans she has turned into vampires. She does this because A) there are apparently few of her own kind available for dating and B) you don't really expect an immortal being who looks like Catherine Deneuve to sleep alone, do you?

The only problem is that while Miriam is guaranteed eternal youth and beauty, her snuggle bunnies are not. Somehow, Miriam always seems to forget this detail when she puts the bite on her latest spouse. At most, her lovers get between 200 and 400 years of gorgeousness and then, bang, they start aging rapidly. Very rapidly. In fact, within 4 or 5 days Miriam's cuddlemates start to resembled wither up, dessicated prunes. Then, with a heavy sigh, Miriam carries their decaying bodies up to her private mausoleum, where she places them in coffins. It's there her spouses continue to rot and rot and rot--although Miriam swears she still loves them all, even if they now resemble those apple core dolls you can purchase at county fairs.

Of course, Miriam's cuddlemates are mighty upset about this turn of events. She, on the other hand, merely sighs over the inconvenience of it all and begins searching for a new partner.

Poor John has just begun this uncomfortable transformation and he's not taking it well. "What is to become of me?!" Bowie shrieks, while the world weary Miriam sips her cocktail with appropriate ennui.

Not prepared to give up the ghost just yet, Ziggy Stardust catches Dr. Sarah Roberts (Susan Sarandon) on TV. She's a blood researcher and may offer him some hope. Unfortunately, Sarah thinks John is a nut when he turns up at her clinic. Only after he ages from 40 to 90 while cooling his heels in her waiting room does the doctor think he might be, you know, not a nut. 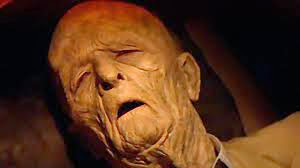 
However, when Sarah finally tracks down the Blaylock's address and shows up at their door, John is already wilting away in his coffin. Deneuve, meanwhile, has short circuited her mourning period and chooses Sarah as her new spouse (Miriam may have been grooming the tween Alice, a music student, for this spot, but after a desperate John slits Alice's throat and sucks up her blood, Miriam is forced to look elsewhere. Not only is Miriam immortal, she's also practical).

Thus we come to "The Hunger's" most celebrated sequence, where Deneuve puts the moves on Sarandon. This is handled with great subtlety, with Miriam playing the piano, Sarandon yanking off her blouse and the two gals gently hitting the sheets. In the course of making whoopee, Miriam bites herself, bites Sarah and then mingles their blood.

Suddenly, Sarandon is hungry, but has no appetite for food. She becomes restless and feverish. Her colleagues at the clinic take a blood sample and discover that "an alien strain of blood" is fighting "for dominance" inside her. Incensed, Sarah staggers over to Miriam's place and gasps, "What have you done to me!?!" That's when Miriam coolly announces that's she's becoming a vampire and that the two of them will live happily ever after. Unlike Bowie and the other spouses, Sarandon is not pleased about this, but she's too sick and sweaty to do anything about it. 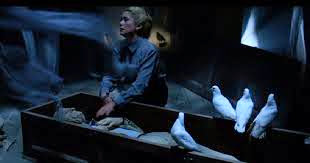 It's at this juncture that the already preposterous "Hunger" blows a gasket. While Sarah is upstairs seating bullets and wasting away because she refuses "to feed" (Deneuve even thoughtfully picked up a self-satisfied gigolo for them to snack on, but Sarandon refused to participate) her boyfriend Tom (Cliff de Young) conveniently shows up. At first, it looks as if Sarah has made a meal out of her fellow human. After all, she waltzes up to Miriam covered in blood and agrees that blood sucking does a body good.

However, as the two women start to lock lips, Sarah grabs Miriam's ankh necklace, which conceals a nasty knife. The good doctor then proceeds to slit her own throat, much to Deneuve's horror. Believing Sarah is toast, Miriam carries her up to the private mausoleum she maintains. In the midst of her grief, the 2,000 vampyre is suddenly accosted by her past loves, who are VERY ticked about their endless states of deterioration. Even though Miriam insists that she "loved them all", the rotting corpses converge en masse and do something unspeakable: they smear Miriam's lipstick AND muss up her hair. Even worse, they cause Denevue to tumble over a railing. As she falls v-e-r-y s-l-o-w-l-y, the youthful bloodsucker ages herself, becoming a hideously wrinkled monster. When Miriam finally hits the ground floor with a thud, her long suffering cuddlemates are finally released from their torment. One by one, they crumble and snap into dust, like long forgotten bread sticks. Yes, they are dead, but their souls are free at last. 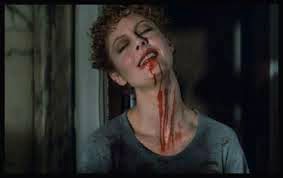 
Unfortunately, "The Hunger" isn't over yet--so while Miriam's victims might have stopped suffering, the audience hasn't. See, when we next see Sarandon, she's alive and well, living in Rome in a spacious apartment. Boyfriend Tom is with her, as is a young gal who maybe the couple's daughter/niece/room mate/live-in nanny, take your pick. Is Sarah a vampire? Did she turn Tom, too? Or did she remain human after all? The movie never tells us. Miriam, meanwhile, has been boxed up in a coffin and locked away in a basement...somewhere. Plaintively, she calls out Sarah's name, but in a basement, no one can hear you scream.

OK, you are now probably wondering, "Hey, Auntie Beth, this movie doesn't seem so bad. In fact, it seems kinda interesting. Are you sure it's worthy of such scorn?"

Here's the thing. "The Hunger" might seem like a good idea for a movie, but in the hands of director Tony Scott, the flick is an irritating exercise in '80's MTV excess, wasted talent and plot holes so big you could drive a Mack truck through them.

Second, the pace of this flick is like that of a drugged ox. Everything...moves...very...slowly and what is suppose to be "languid" or "sexy" is merely nails-on-the-chalkboard annoying. Many is the time during "The Hunger" when you want to scream, "Will you please get a move on?! You may be immortal, but I'm not! Move it!" 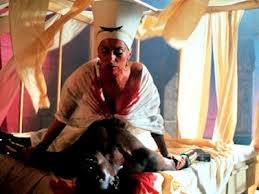 "This won't hurt a bit." Two thousand year old Miriam in the early days of her vampire career.

Third, the script for "The Hunger" has more holes in it than a piece of Swiss cheese. Who is Miriam? How did she become a vampire? Was she born to it or was she turned into one? Where did she met John? Did he willingly become a vampire? Why does Miriam lie to her spouses? Is she afraid that if she told them immortality was impossible, nobody would hook up with her? And what about Sarah? She looked pretty dead at one point of the film; was she just faking it? Did she become a vampire in the end, even if she didn't want to? By failing to tie up these loose ends, "The Hunger" becomes even more annoying, if that's possible.

Personally, that's why I prefer the vampire movies of the '30's, '40's and '50's. Yes, they didn't have the budget "The Hunger" had, but at least those flicks had a beginning, middle and end that were plausible in their own blinkered way. Also, the directors didn't make a cult out of style and focused on the characters, not the curtains. Finally, pretty as they are, I will take Bela Lugosi over Catherine Deneuve and David Bowie any day.

So, until next time, keep some garlic handy and Save The Movies!