Robin Stone IS "The Love Machine"...according to Jacqueline Susann, anyway.


Ah, greetings to you and yours, movie lovers.

How are things going? Not good? Has your career hit a dead end? Is your spouse/partner/main squeeze/ old-ball-and-chain becoming a pain? Has your get up and go gone up and went?

Take heart, movie lovers. Even if things seem bad now, please try to remember this: someone, somewhere, has it much, much worse.

Don't believe me? Well, then, settle in for another heapin' helpin' of our semi-regular feature "If You Think Your Life Sucks, Please Watch..." where I, the Movie Maven,  rummage through the Junk (Cinema) Drawer to unearth a flick gar-un-teed to lift you out of your deepest, darkest doldrums.

So, "If You Think Your Life Sucks, Please Watch..."

This is the second (of three) big screen shlockbusters based on a tripe'n trashy Jacqueline Susann novel. 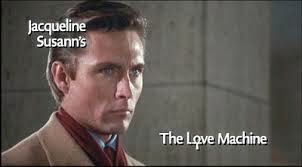 "Note to self: My face hurts." John Philip IS Robin Stone.

Susann, whose prose caused Truman Capote to snap, "That's not writing, that's typing", introduces us to Robin Stone, "a lock without a key", a man "pursuing freedom, but never free". It's his meteoric rise from local anchor to the head of "IBC News" that "The Love Machine" chronicles. Just like in "Valley of the Dolls" and "Once is Not Enough", Robin's roller coaster ride among the "media elite" includes plenty of cheap, sleazy behavior, ugly clothes and big hair--all set to a '70's Muzack sound track that will relentlessly worm its way into your brain, pushing out vital information you need and replacing it with such pearls as "That's Robin Stone/he walks alone..."

John Phillip Law--a blank eyed chump who bears an uncomfortable resemblance to "Keeping Up With the Kardashians" hanger-on Scott Disick--IS Robin Stone. When we first catch sight of him, he's filing a report on "the new fall fashions", which include ultra wide legged pants, stack heels, go-go boots topped with fur, checkered capes and a get-up that can only be described as a Holly Hobby gingham print evening gown with the middle cut out.

SHE: "Amanda. Just Amanda. That's all there is."

Mike Wallace, your days are numbered. 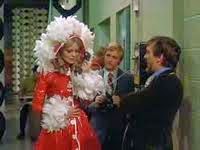 Big Bird takes an emergency phone call? No, it's super model Amanda (Jodie Wexler) in one of her fab outfits.


Seconds later, Robin and Amanda (Jodie Wexler) are back at his swanky pad, making whoopski. When Robin awakens from a sound sleep, he catches Amanda quietly dressing and has a fit. The model explains that she has an early call, but Robin is furious. "Nobody leaves me! Nobody!" he thunders--and then busts Amanda in the chops for good measure.

So there is poor Amanda, dressed in a head to toe red get-up, attempting to be photographed by the "world famous" shutter bug Jerry Nelson (David Hemmings, in a role so over-the-top camp that he makes Rip Taylor seem like Chuck Norris), waxing lyrical about her mysterious, difficult new beau.

"I can handle men so beautifully when I'm not involved," Amanda sighs. "It's different when you care." (Pause.) I'm in love with him, Jerry."

She's not the only one. Watching Robin on TV and ogling him like the juicy piece of butt-steak he is is Judith Austin (Dyan Cannon), the rapacious wife of IBC head Robert Ryan. It's at her direction that Robin is promoted to his executive position--not because he's a programming whiz, mind you, but because she's anxious to sleep with him. 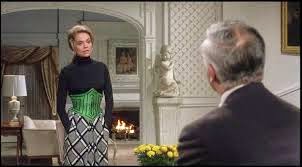 
Also panting after Robin is the bassy Edith Evans (Maureen Aurthur). She works in the network's publicity department and enjoys a reputation as "The Celebrity Banger." One day she corners Robin and tells him he needs new publicity photos. Robin explains her that Jerry Nelson will take care of that, except "he only wants to shoot me in the nude."

"Maybe I can hold the flash bulb," Edith offers.

When Robin suggests Edith dampen her ardour, she mutters under her breath, "You don't know what you're missin', buster!"

Meanwhile, back at Robin's pad, the besotted Amanda snuggles up to Robin and breathily asks, "Am I your girl? To have and to hold forever?" Then she presents Robin with an ankh pinkie ring, explaining that the ankh is "the Egyptian symbol of life and love everlasting."

How does Stone react to such a trinket?

Amanda's face crumbles as she pitifully wails, "Oh, Robin, I thought it was pretty..."

"Note to self: Get a real beard." David Hemmings as mod photographer Jerry Nelson.


See, Robin calls ALL the shots in his relationships. It's HIS world and YOU'RE just living in it. So when Amanda becomes too clingy and starts throwing around words like "love" and "forever", well, Robin's got NO time for THAT. And he proves it by cold shouldering Amanda and slipping between the sheets with every giggling bimbo who comes his way.

While Amanda simpers and stews over this state of affairs, Judith takes a more direct approach. Because she's the one responsible for Robin amassing such power at IBC, she demands the hunky executive begin servicing her exclusively. She also insists on having a key to his always busy pad. However, when Judith must accompany her hubby to Europe so he can recover from a heart attack, Stone sees no reason why he must halt the traffic in his bedroom. This especially cheeses off the returning Judith, who registers her displeasure in a unique way: after catching Robin in the shower with TWO bimbos, Judith sets his bed on fire.

Hell hath no fury like a trophy wife scorned!

Believe it or not, a torched mattress soon becomes the least of Robin's worries. Amanda, deeply hurt by Robin's repeated rejections, commits suicide. In his grief, Robin hires a king-sized hooker billed as "The Amazon Woman" in the film's credits (honest). The duo are just about to get down to business when the hooker (Eve Bruce) pulls off her curly black wig to reveal Amanda-like blonde tresses. Unnerved by the resemblance to his lost love, Robin decides to leave. The furious hooker then begins taunting her client about being a "closet queen" who (gasp!) "probably still lives with his mother!" 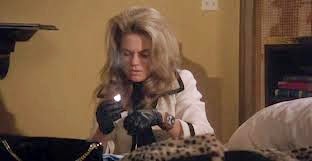 "Can't start a fire without a spark..." A furious Judith decides to take revenge on philandering sweetie Robin Stone.

The unhinged Robin proceeds to beat the stuffing out of the lippy lady of the evening. Then he scampers over to fey photog Jerry's place. Cleaning up his pal's blood and bruises, Jerry tisk-tisks Robin's recent behavior as if it were the height of bad taste: "Why did you have to go out and beat up a hooker?" he sighs. In return for giving Stone an alibi, Jerry insists Robin buy him " a gold slave bracelet"--and engrave it, too. Robin agrees.

"The Love Machine" then shifts its locale from NYC to sunny LA. That's where Robin catches up with Judith and tries to smooth things over. He even escorts her to a swingin' party Jerry is hosting with his actor boyfriend. Unfortunately, Robin chooses to ignore Judith in favor of other guests, which makes her very, very mad. Then she stumbles upon the gold slave bracelet Robin purchased for Jerry.

What follows next is an eye-popping, show-stopping free-for-all that puts the Patty Duke/Susan Hayward cat fight in "Valley of the Dolls"--which ended with Duke flushing Hayward's wig down the john--to shame.

Once Judith has the incriminating slave bracelet in her grasp, she gleefully informs Robin, Jerry and his actor beau. Her plan is to brief the tabloids that Robin and Jerry are a couple and use the bauble "as proof." Judith brags that Robin's career will be finished--and promptly drops the bracelet down her bra for safe keeping. 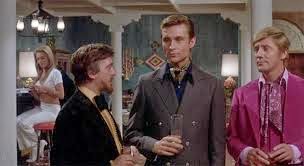 "Can I freshen your drink?" Gracious host Jerry mingles with his guests while Judith simmers in the background.

When we next see Robin, he's exciting the police station. Then he's magically transported back to NYC, where he wanders around frozen-faced until his theme music ("He's All Alone" by Dionne Warwick) cues up. Then the credits roll and "The Love Machine" ends.

Kind of abrupt, don't you think? I mean, what happened? Was Robin fired? Did he quit? Perhaps he's "on assignment"? Are Judith and her husband through? Hey, movie makers, want to clue us in here? 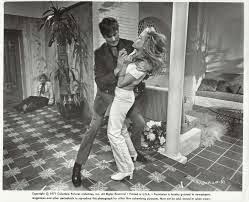 "Shall we dance?" Robin and Judith struggle over an incriminating "slave bracelet." Jerry's boyfriend is collapsed in the corner.

Of course, for connoisseurs of cheese/sleaze "The Love Machine" is a cinematic document of sheer, unadulterated nuttiness.

First and foremost, one must applaud the near catatonic performance of John Philip Law in the title role.

With his hair plastered to his skull and never in the same turtleneck twice, Law is about as charismatic as a corpse in the advance stages of ririgormortis. Indeed, his unblinking state and monotone delivery recall Law's earlier performance in 1968's "Barbarella", where he played the angel Pygor to Jane Fonda's notorious space cadet. The big difference was in that movie was his character was suppose to have an unblinking stare because he was blind.(He was also down in the dumps because he'd lost the will to fly--until he has sex with Barbarella. Then he's soaring in the wild blue yonder like a pro.) However, Law's Robin Stone is so lifeless, you just don't buy that women are so crazy about him--unless they have a thing for necrophilia, which is kinda of icky.

Also stumbling around here is Jodie Wexler as the doomed, dim Amanda. Perhaps the highlight of her performance is the TV commercial she stars in to promote "Xanadu', the fragrance of Amanda." Wearing a bunch of hippy/dippy outfits and frolicking like a hose monkey among cardboard sets and psychedelic lighting, poor Wexler does her best to appear as the height of counter-culture chic. Unfortunately, the whole thing resembles a cross between an AV geek's wet dream and a cheap-o version of an OMNI-MAX Laser Floyd show. No wonder the poor dear disappeared from the screen after this--and who could blame her?

Until next time movie lovers, be grateful that your fashion fails have remained private, and SAVE THE MOVIES!