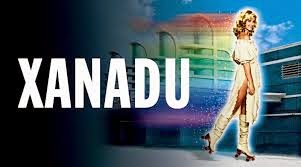 Olivia Newton-John in the role that made her shameless: Roller skating Greek Muse Kira in "Xanadu."

Critics once carped that if white bread could sing, it would sound like Olivia Newton-John.

Mean, yes, but there was a a grain of truth lurking beneath the snark.

After all, the Aussie song bird had unleashed a series of sweet, breathy hits like "Have You Never Been Mellow?", "I Honestly Love You" and "Please, Mister, Please" that didn't exactly give Patti Smith or Marianne Faithful any sleepless nights.

However, in 1978, ON-J burst out of her middle-of-the-road bailiwick by co-starring with John Travolta in the mega-hit "Grease".

Set in "the nifty fifties", this musical spoof turned the classic good girl/bad boy romance on its head by having sweet Sandy (ON-J) become a slut to keep the love of punk Danny (Travolta).

The runaway success of "Grease" had many in Tinsel Town believing that ON-J had the makings of a movie star. So, in 1980, ON-J starred in "Xanadu": an over-the-top "musical fantasy" where Greek muses, frustrated artists and roller skaters cavorted on screen accompanied by insipid songs, cheap-o animation and Gene Kelly (!). 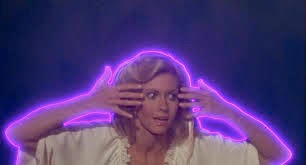 "Do my eyes deceive me or am I really in this movie?" Neither ON-J (or her fans) can believe she's agreed to star in the roller disco extravaganza "Xanadu".

The final result was NOT a feel good movie for the ages, but a loud, nonsensical, glittery monument to...disco kitsch.

In fact, "Xanadu" was (and is) such an epic failure that it proudly takes its place in the Junk Cinema Hall Of Shame as ONE OF THE WORST MUSICALS EVER MADE,  alongside "Can't Stop The Music", "Lost Horizon" and "At Long Last Love."

What's more, the sheer awfulness of "Xanadu" would inspire the creation of The Golden Raspberry Awards, the only movie awards that really count for anything (in my opinion, anyway).

How can a musical featuring Gene Kelly be that bad, you ask?

When your co-star is a bland songstress who can't dance, the second male lead is a scowly chap who appears to be suffering from tight under things and the soundtrack is penned by ELO, it's easy!

The (non)fun begins by introducing us to Sonny (Michael Beck), a surly fellow who paints full-sized reproductions of album covers (hey, it's 1980 remember!). Naturally, Sonny yearns to create something more substantial, but he doesn't know where or how to begin.

Enter roller skating Greek Muse Kira (ON-J) who, along with her sisters, "magically" comes to life from a mural while the ELO tune "I'm Alive!" relentlessly batters your brain. After dancing up a storm, the muses dart off in different directions. Kira, who is not much of a dancer, suddenly roller skates up to Sonny, kisses him on the lips and flits off without a word.

Considering that muses have inspired the works of Shakespeare, Mozart, Michelangelo, Picasso and David Hasselhoff, what is Kira meant to inspire in Sonny? A revolutionary new school in painting? A brilliant novel? Perhaps an international TV hit about the personal struggles of hard-bodied life guards?

Ah, no. Kira is meant to inspire Sonny to create the world's most fabulous roller disco night club EVER. Isn't that just what the culture starved masses are crying out for? 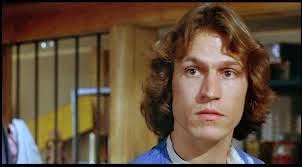 To assist Sonny in this unholy quest, Kira directs him to Danny McGuire (Gene Kelly). Turns out Kira had inspired Danny himself 40 years earlier when he was a big band clarinetist. Sadly, Danny later lost the spark and gave up music to become a millionaire developer.

Together, Danny and Sonny decide to open a club. Unfortunately, the partners vision of their establishment will be like are, um, poles apart. See, Danny envisions at '40's night club, while Sonny imagines as '80's Viper Room rock vibe. To dramatize this "discrepancy", viewers are subjected to--actually, attacked by--a battle of the stage shows. One is '40's swing with jitter buggers and zoot suits, while the other features The Tubes and a cadre of "Solid Gold" dancers in leather and spandex. Cutting back and forth between the numbers, dancers and singers jump, jive, wail, writhe, moan, scream, twist and shout with increasing frenzy. In what is meant to be the "climax" of the scene, the sets merge, the performers mingle and the whole shootin' match melds into one, ill-fitting musical mash-up.

Or, to put it another way, picture the Hindenburg crashing into the Titanic--in stereo--and you have a pretty good idea of what a disaster this "show stopper" truly is.

Alas, the above mentioned sequence IS NOT the only "Xanadu" production number that goes off the rails and out of its mind. There is the roller skating love scene--I kid you not--conducted, oh, I don't know, in some vacant studio somewhere, where Sonny and Kira roller skate in, out and around shifting sets and special effects. The song warbled in the background is "Suddenly" by Cliff Richard and ON-J. This number is meant to be as dreamy and lyrical as the previous number was loud and obnoxious. However, the sight of Sonny and Kira endlessly skating, skating and skating eventually makes even the most patient viewer WANT TO SCREAM.

Anything else? Oh, yes. There is "All Over the World" where Kelly, ON-J and Beck dance and shop "all over the world" in preparation for Xanadu's grand opening. There is an animated sequence where Sonny and Kira frolic as cartoon characters. Later, ON-J sings "Suspended in Time", outlined in bright neon, where she laments about being an immortal muse in love with a mortal jerk. Last but not least, is the grand opening of Xanadu, where Gene Kelly leads hordes of skating extras who yell "Ho!" over and over again for no good reason. 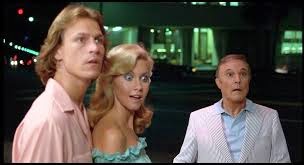 The cast of "Xanadu" were as shocked as anyone else that their movie turned out to be so awful.

I could also mention the final numbers where Kira and her muse sisters sing and dance in a variety of styles and costumes--but I wont. I've suffered enough.

Lots of coin was dropped on "Xanadu"--$20 million, to be exact--and as the saying goes, it's all up on screen...and flushed down the (Olivia Newton) John. Of course, the asinine script, headache producing soundtrack and endless roller skating sequences helped doom "Xanadu" to bad movie back wash--although one cannot leave out the contributions of the cast, either. Sweet as she may be, ON-J just doesn't have the strength of personality (or the dancing skills) to carry a feature film. Co-star Michael Beck (last seen in "The Warriors"), meanwhile, is too glum and snarly to be a romantic lead. And Gene Kelly? A national treasure, to be sure. But why,oh, why would HE of all people come out of retirement for THIS? Is it any wonder that after "Xanadu"s failure Kelly hurried BACK INTO RETIREMENT and happily STAYED THERE?

My favorite review of this musical mishap was provided by a contributor to IMDb who summed up our feature presentation thus: "Yes, it's a stupid movie."

Consequently, the only good to come out of "Xanadu" was the founding of the Golden Raspberry Awards by John Wilson. "Xanadu" grabbed nominations for Worst Picture (it lost to "Can't Stop the Music"), Worst Actor (Beck losing out to Neil Diamond in the remake of "The Jazz Singer"), Worst Actress (Brooke Shields bested ON-J), Worst Screenplay (another win for "Can't Stop the Music") and Worst Original Song ("The Man With Bogart's Face" won). Thank God, director Robert Greenwald was recognized as Worst Director, although, frankly, I can't believe he was the only one so honored by the Razzies. If ever a movie deserved to sweep the (berry) boards, it was "Xanadu".

In an interesting side note, the roller disco craze of the late '70's-early 1980's spawned several more, equally awful films. There was "Roller Boogie", where Linda Blair finds love on four wheels. Also not to be forgotten was "Skate Town USA", which was the feature film debut of Patrick Swayze. His most memorable scene was a roller disco solo (performed bare chested) where Patrick cracked his belt like a whip. And then there was the notorious "CHiPS" episode where Ponch and Jon organize a celebrity studded roller disco fund raiser for the LAPD. Yech! Talk about on over dose of boogie fever.

Until next time, keep your white disco suite in storage and SAVE THE MOVIES!