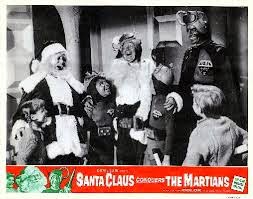 Look no further than today's offering, a tale of Christmas cheer that combines Jolly Old St. Nicholas, a pre-teen Pia Zadora and green martians--all shot on an empty airport hanger on Roosevelt Field by some off duty "Howdy Doody" employees for the bargain basement price of $200,000 bucks!

The plot (such as it is) is really pretty simple. The kids on Mars are lethargic and depressed because they have no fun. They spend their days doing algebra and live for the pirated broadcasts of earth TV that feature Santa Claus and such alien concepts as "tender loving care."

However, it is in its execution that "SCCTM" achieves its status as a Junk Cinema Jewel ne plus ultra.

From its cheap-o sets to its hokey costumes to its bad jokes to its lame animation to its irritating theme song ("Hooray for Santy Claus!") to its misspelled title credits ("custumes", anyone?), "SCCTM" hits and sustains a perfect pitch of zany incompetence that few films can to match. 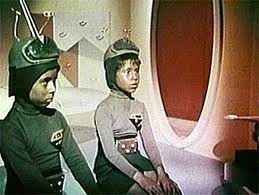 Even as a tween, Pia Zadora displayed the acting prowess that would later earn her a "Best New Star" Golden Globe (with a little help from hubby Meshulam Riklis).

You know what you're in for when the best known member of the cast is Pia Zadora. She plays Girmar (which stands for "girl martian"), one of the tots belonging to Leonard Hicks, the King of the Martians, or "Kimar" for short. Dipped in green paint, sporting a tinfoil helmet with antennae festooned on top and her chipmunk cheeks front and center, the future star of "Butterfly" and "The Lonely Lady" is no more ridiculous than anyone else in this flick, but when the best acting of your career is in a low-budget martian movie, it doesn't bode well for future artistic triumphs.

After consulting a wizened old mystic named "Chochum", the martian monarch decides to assemble a crack team to land on earth and bring Santa Claus back to the angry red planet. As Kirmar sees it, "Earth has had Santa long enough!" The only dissenter of this operation is the Elliot Gould-ish Volgar (Vincent Beck). With his bushy brows, droopy 'stache and evil laugh, Volgar doesn't want martian kids running around and having fun. In fact, he thinks "all this fuss about a fat man in a red suit" is a bunch of b@3&s*+?--and vows to scuttle the king's plan.

Due to their vastly superior technology, the martians land on earth lickety-split and soon make contact with siblings Betty and Billy. Kirmar reassures the startled kids, "Don't be afraid. We have children just like you on Mars." Still, Betty is sufficiently confused by the martians appearance that she points to Kirmar's wiggly antennae and asks, "Are you a television set?"

Scooping up the kids, the martians head back to their ship and set a course for the North Pole. Put in charge of babysitting Billy and Betty is Dropo (Bill McCutcheon), "the laziest man on Mars", who is a member of the king's household. As the flick's designated comic relief, Dropo is a cross between an idiot and a moron. He makes Gilligan on "Gilligan's Island" seem suave and sophisticated in comparison. And he always seems on the verge of wetting himself. However, it's Dropo and the earth tots who over hear Volgar's plan to off Santa and vow to defeat him.

Barging into Santa's workshop, the martians use their "Freeze Ray Guns" (which look like Super Soakers) to disarm the elves and a truly batty Mrs. Claus. (IMPORTANT NOTE: This is the first film to feature Mrs. Claus.) Wanting to avoid further bloodshed, Santa (John Call) agrees to travel to Mars. Billy and Betty, meanwhile, have escaped from the martian rocket ship. They plan to warn Santa, but battered by the wind and snow, they must seek shelter in a cave. It's there they run afoul of a "polar bear"--actually, some poor bastard stuck in a ratty, ill-fitting costume with a paper mache' head. No sooner does the "polar bear" saunter off than the martians find Billy and Betty and cart them back to the ship. 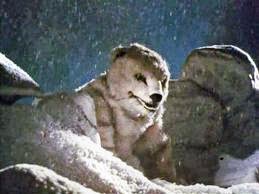 En route to Mars, Santa manages to charm and disarm all the martians--except for nasty Volgar. It's he who lures Kris Kringle and the kids into an air lock inorder to jettison them out into space. However, the meanie martian fails to take into account Santa's own super powers--and is astonished when the jolly old elf turns up just fine, thank you, along with Billy and Betty. Never one to harbor grudges, Santa forgives Volgar (after all, it's Christmas).

To the surprise of no one, Santa is welcomed with open arms on Mars. Soon the little green kiddies are happier than they've ever been. The martians even build St. Nick a state of the art workshop, where Billy and Betty (along with Girmar and her brother Bomar) lend a hand to meet the demands for toys and games for Mars' youngsters. Yet...it leaves the humans feeling hollow. Santa misses doing things by hand ("the old fashioned way") and Billy and Betty become homesick. Realizing that it's unfair to keep Santa all to themselves, the martians plan to send their earth visitors home. What's more, Dropo, trained by St. Nick himself, is all set to take over as Mars' resident Santa Claus, thus ensuring the yule tide traditions will live on.

The only fly in this holiday ointment is, naturally, Volgar. So determined is he to kill Santa that he rounds up some martian miscreants to help him carry out his evil scheme. What the Elliot Gould-ish villain doesn't count on is Billy, Betty, Girmar and Bomar. No sooner does Volgar arrive at Santa's martian headquarters than the kids bombard him with pop-guns, Wham-O air blasters, ping pong balls, model air planes, toy soldiers and water pistols. Thoroughly beaten down and overwhelmed by this vicious onslaught, Volgar is finally arrested and sent to jail for good. Christmas is saved...at least on Mars.

Shortly there after, Santa, Billy and Betty say goodbye to their Martian friends. With Kimar's help, the trio blast off for earth, just in time to meet the December 25th deadline back home. Hooray for Santy Claus! 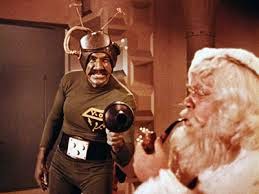 "Let me introduce you to my little friend!" The evil Volgar threatens Santa with his deadly martian...blow dryer.

Cataloging "Santa Claus Conquers the Martians"'s failures would be like tripping a dwarf.

Yet...even though the premise is nutty and the final result is so lame, you can't help loving this picture. It's heart is in the right place, even if it's brain isn't. In fact, some film scholars have even suggested that the real message of "SCCTM" is for people not to forget their traditions, to let kids be kids and not to become overly dependent on technology.

Personally, not a bad message for anyone to hear.

So, until next time, hang your stockings on the chimney with care, and SAVE THE MOVIES!