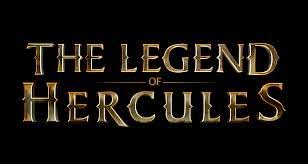 I won't keep you in suspense: it's "The Legend of Hercules", directed by Renny Harlin and starring Kellan Lutz!

In fact, "The Legend of Hercules" was SO AWFUL a native of director Harlin's home country (Finland) was moved to write on The IMDb, "He makes me ashamed to be a Finnish person."

WAY#1: "The Legend of Hercules" shows its stupidity right from the beginning by completely botching the story of Herc's birth. 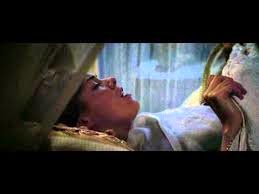 "I had sex with Zesus and all I got in return was Hercules": Queen Alcemene has a close encounter with Greek god greatness.

According to the flick, Herc's ma Queen Alcemene prayed to the Greek goddess Hera for a son. Hera, an obliging sort, promptly sent hubby Zesus down to earth to do the nasty with Alcemene. We know the King of the Greek gods achieved maximum joy from this encounter because he mooed like a cow when he hit the bull's eye, if you catch my drift.

According to Greek legend, Zesus did indeed do the wild thing with Herc's ma, but Hera did not arrange it, condone it or even like it. On the contrary, she was fit to be tied about her hubby's relentless philandering. So mad was Hera about this affair and the child it produced, that she sent a serpent to kill baby Herc, who promptly strangled the critter in his crib.

WAY#2: Herc is portrayed by Kellan Lutz, best known for his minor role in the "Twilight" sagas. Lutz has abs of washboard, buns of steel, shins of granite, pecs like melons and brains of mush. Walking and talking simultaneously is not a skill Lutz the Klutz has perfected yet. Thus, instead of featuring him in any more films, I kindly suggest he just be put out to stud. 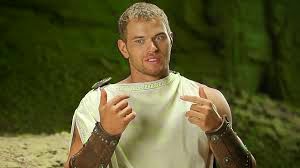 Introducing "Jerk-u-les"!: Stud muffin Kellan Lutz in the role that will make him shameless.


WAY#3: The slaying of the Nemean Lion figures prominently in "The Twelve Labors of Hercules", the epic poem written about 600 BC by Peisander.

However, in this flick, the Nemean Lion is just a very shoddy CGI; no context is given as to why Herc slayed it or why he wears its carcass for a cloak. And, to be fair, in this instance, the lion wasn't hurting anybody. And he was kinda cute. Herc just offed the kitty to upstage his sniveling big brother Iphicles and impress Princess Hebe and that's not OK.

WAY#4: Herc's older brother Iphicles (Liam Garringgan) is a scowly, whiney villain in a bad wig. Scott Adkins as pa King Amphitryon looks like Mr. Bean in a too-tight toga. Bro Iphicles is especially obsessed that Herc might have plundered the maidenhood of Hebe (Gaia Weiss), the princess the brothers are at odds over. When confronted about this, Herc replies, "Please reassure my brother that that is none of his business"--which is Herc-speak for, "We did it and you know it!"

Isn't it a bit icky that Princess Hebe is valued only for her looks and her virginity? That's not OK, either.

WAY#5: After Herc is sent on a suicide mission, he's captured and forced to be a gladiator or a cage fighter or a pro-wrestler or a ninja or some such thing to "earn back his freedom." This A) never happened in the actual Herc legends and B) it's a blatant rip-off of "Gladiator" and C) it's yet another example of how director Harlin was banking on his audience being so dumb they wouldn't know he was screwing with them.

Surprise, Renny! We're NOT dumb AND WE DID notice you were screwing with us. 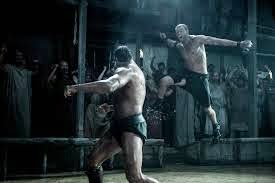 "Look at me! I can fly!": Herc springs into action.

WAY#6: For a good chunk of the flick, Herc does not know and/or really believe he is Zesus' son. Then he's about to be killed and/or crucified and he suddenly realizes having a Greek god for a dad might not be a bad thing. Once Herc undergoes this, uh, "conversion experience", he becomes EVEN stronger.

The unsubtle implication here is to suggest Herc has a lot in common with another son of a powerful man, namely, Jesus.

This is, of course, utter horse pucky. Not even Kirk Cameron would suggest such a thing (but I wouldn't put it past him). This is yet ANOTHER example of Mr. Harlin counting on his viewers being stupid. Well, Mr. Harlin, stupid is as stupid does!

WAY#7: No doubt hoping to appeal to the ladies in the ticket buying public, "The Legend of Hercules" posits that Herc is just ga-ga about Princess Hebe and that marrying her is the only thing he wants to do in the whole wide world and he never, ever, EVER looked at another female.

As usual, Harlin and his script writers chose to ignore yet again THE COMMON KNOWLEDGE about Hercules, mainly that he was a rather frisky fellow who enjoyed tonsil boxing as much as the next demi-god.

Herc actually had three (some say four) wives. Wife #1 was Megara. Herc "won" Megara by helping her pa King Creon defeat the Minyans. When Hera drove Herc mad, he ended up killing Megara and their ( three to eight) tykes. This resulted in the famous "Twelve Labors of Hercules", which he undertook to as penance for his crime.

Wife #2 was Omphale, "The Barbarian Queen of Lydia", who purchased Herc as her personal slave. See, after Herc killed Iphitus, he was sentenced to three years of servitude, which is how Omphale managed to bag her goods. He and Omphale got along great, but when his three years were up, Herc left. Because the circumstances of how Herc and Omphale actually got together are a bit unusual, some scholars question whether this was a "proper" marriage. For the sake of argument, we will assume it was a proper marriage.

Wife #3, meanwhile, was Deianira. This spouse Herc "won" after he defeated the river god Acheloos in a wrestling match.

When did Herc hook up with Hebe? It was only AFTER he was granted immortality and moved in with the other Greek gods on Mt. Olympus;  only then did Herc and Hebe became an item. For the record, Hebe was the daughter of Zesus and Hera, making her Herc's half-sister as well as wife #4. Eww!

Oh, and here is another tidbit about Herc: When he agreed to help King Thespios rid his kingdom of some giant rouge critter, he noticed the king had 50 virgin daughters. Herc slept with 49 of them (the 50th was said to be "too shy" to participate). Nine months later, King Thespios had 49 grandsons, all strong as an ox. Talk about keeping it "all in the family"... 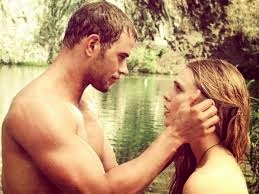 "Isn't it romantic?": The makers of "The Legend of Hercules" wanted movie-goers to think this is how Herc expressed his love to mortal women... 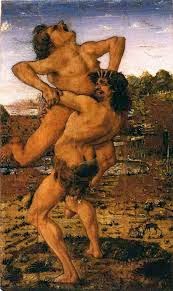 In reality, it was probably more like this...which ISN'T very romantic.

WAY#8: Although big, beefy Kellan Lutz is supposedly the star of this show, it's Liam McIntyre as army buddy/fellow captive Sotiris who steals the movie. Simply put, McIntyre is everything Lutz isn't: talented, charismatic, intelligent, able to read lines naturally. All of which begs the question: why wasn't he cast as Herc? He might not have been able to save "The Legend of Hercules" completely, but McIntyre would have made a more compelling hero. Pay attention, Renny Harlin! Never send a boy to do a man's job!

Instead of wasting big bucks on special effects, why not invest that money in a decent script and hiring actors who can act instead of just staring into the camera and flaring their nostrils? The 3-D effects in "The Legend of Hercules" did not enhance or improve the viewing experience one bit.

WAY#10: Hercules movies are not meant to seen as historical treatises on ancient Greece. After all, in "The Loves of Hercules" (1960), Jane Mansfield played a naughty temptress who turned her ex-cuddlemates into trees. Herc has battled a race of moon men, drunk from "the waters of forgetfulness", co-starred opposite the 3 Stooges and sang with the voice of Michael Bolton. Do I also need to point out the Kevin Sorbo TV series where Herc was turned into a sensitive '90's guy with Anthony Quinn popping up as Zesus?

However, at least these movies/TV shows were fun. "The Legend of Hercules" was not fun--except when that obviously bogus moon peeked through the clouds or the unseen Zesus mooed like a cow while doing the wild thing with Herc's ma.

WAY#11: Earlier, I mentioned how human beefcake Kellan Lutz was upstaged by co-star Liam McIntyre. Here is a pictorial of actors who played Herc much, much better than Lutz: 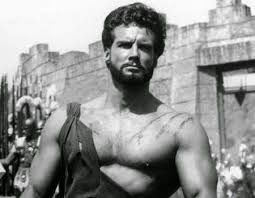 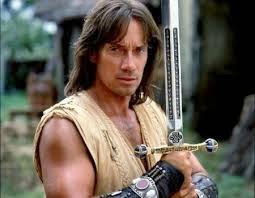 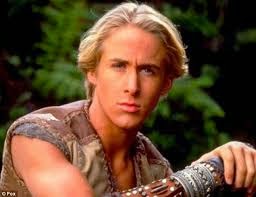 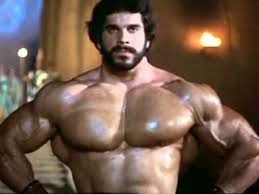 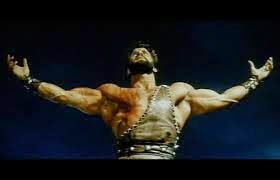 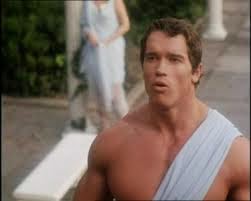 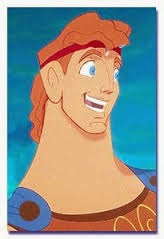 Cartoon Herc...who was still more life like than Kellan Lutz.

Just imagine, for a moment, that you are Renny Harlin or Kellan Lutz and you read these missive penned in your honor:

"Even dental extraction is more enjoyable to endure than this artistically bankrupt misfire."--Digital Spy.

"Ode to a Grecian turd."--Houston Press

"The only thing epic about 'The Legend of Hercules' is what a failure it is."--Washington Post

"Has a whiff of the Augean Stables about it, if you catch my drift."--McClatchy Tribune News Service

"While the role (of Herc) may not call for a master thespian, it at least begs for someone who can emote without looking like he's straining to execute a dead lift."--Variety

"If there were any reservations about just how bad an actor Kellan Lutz is, 'The Legend of Hercules' more than confirms it."--Bullz-eye.com

For all these reasons, "The Legend of Hercules" earns the (dis)honor of being 2014's worst film.

And on that note, I take my leave.

So, until next time, keep your loin cloth clean, and SAVE THE MOVIES!

The author wishes to acknowledge the assistance of Wikipedia, History Answers.com and Rotten Tomatoes.com in researching this article.