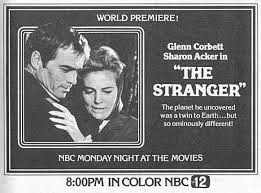 Set your clocks so you won't miss one thrilling moment of "Stranded in Space" (AKA "The Stranger")!

A hail and hearty hello to you and yours, movie lovers.

The subject of today's article is a justifiably obscure, supremely nutty TV movie that features a man on the run, a Big Brother totalitarian government, a planet where everybody is left-handed and an edict banning all open air concerts...produced by crooner, actor and orange juice promoter Bing Crosby(!?)

Ladies and gentleman, I give you "Stranded in Space"!

Made as a (failed) TV pilot in 1973, "Stranded in Space" (AKA "The Stranger") piqued my interest after reading about it in my MST3K bible, The Amazing Colossal Episode Guide.

See, Frank Conniff (TV's Frank) claimed that "Stranded in Space" was "the forgotten MST3K experiment". Unlike other flicks featured on the show, nobody ever wrote about it or asked about it; it had no fan following at all.


Conniff blamed this on "Stranded in Space"s relentless tone of blah "mediocrity", which he described 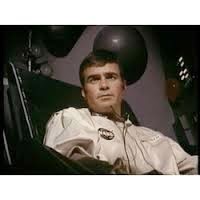 "Houston, we have a problem. This movie sucks.": Astronaught Neil Stryker (Glenn Corbett) before trouble strikes.

"As neither bad enough to stand out nor good enough to watch. It was just there."

It begins like this. Astronaut Neil Stryker (Glenn Corbett) is orbiting space (in a capsule the size of a chew toy) with two other cohorts. One fly-boy is a newly married groom anxious to get back to Earth to resume his honeymoon. There is some vague problem going on, but Cape Canaveral isn't too worried, so the crew decides to relax. Then suddenly the camera starts shaking, the crew begins wigging out and the screen goes fuzzy...

Next we're at a hospital, where Stryker is holed up in his room, surrounded by lots of flower arrangements. He's been denied visitors, phone calls, newspapers, TV, even windows. Kindly Dr. Revere (Tim O'Connor) tries to reassure his patient that everything is peachy and he'll be home in no time. Yet...Stryker doesn't believe him. What's going on?

Turns out, Stryker crash landed on Terra, a planet that is like an impostor fragrance: it looks and smells like Earth-- but isn't Earth! Even more disturbing: Terra is run by an all-knowing, all-seeing, all-pervasive totalitarian government called The Perfect Order. Citizens are subject to constant monitoring and must follow a strict diet of dry conformity. Religion is outlawed, as are open-air concerts, everybody dresses in bland polyester separates and hooch is on the outs.

On the plus side, there is no poverty or unemployment, the streets are spotless and health care is free.

It all comes at a terrible price, of course. There is no personal freedom or freedom of thought. Folks who challenge The Perfect Order's orders are routinely rounded up and sent to the dreaded "Ward E", where they are subject to torture and/or brainwashing and later returned "rehabilitated" to society. If Ward E should fail, the trouble makers are snuffed. 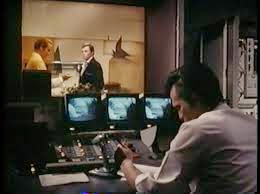 "Is this on every station?" The Perfect Order spies on everybody on Terra.

How did The Perfect Order come to be? Well, "Stranded in Space" is kinda wishy-washy about that, to tell you the truth. It seems after a horrific war, the people of Terra wanted a society free of strife and conflict and somehow The Perfect Order was happy to oblige. It's been in power for, like, 35 years, and although people don't laugh and enjoy themselves as much as they use to (according to one old feller), The Perfect Order is thoroughly entrenched on Terra.

As with any all-powerful regime, The Perfect Order has devoted followers who rise up through its ranks via their complete toadying servitude to The Man. In "Stranded in Space", the pinched-faced, pompadoured Cameron Mitchell personifies this type of apparatchik. As George Bennett, Mitchell believes in The Perfect Order with all his heart and is convinced that Neil Stryker is a threat to Terra's way of life. That's why he wants the jet jockey dead...after Dr. Revere finishes probing his mind, of course.

Neil, no dummy, realizes something is very, very wrong and manages to bust out of the hospital. He stumbles around Terra trying to find someone who will help, but not rat him out to The Perfect Order's enforcers, who strut around in black turtle-necks and grey sport-coats. It's during these jaunts that Neil realizes that Terra has three moons, the people are left-handed, the only cars around are Chrysler's and that most people know someone who ran afoul of The Perfect Order and then "disappeared."

Now, you might think from my review that "Stranded in Space" seems kinda intriguing.

You would be wrong. Very, very wrong.

Despite elements that recall "The Fugitive" and the cult 1960's British series "The Prisoner", TV's Frank is right: there is nothing NOTHING! memorable about this movie.

Watching this flick is like being stuck in an endless city council meting where they relentlessly ponder zoning regulations and keep forgetting to break for lunch. 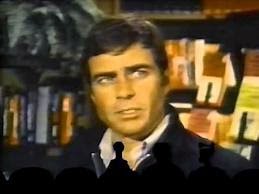 "The Stranger": Glenn Corbett grits his teeth...and forget to act.


Or, to put it another way, I've had more fun waiting in line at the DMV than I had watching "Stranded in Space". And I watched this movie voluntarily! I had to go the DMV!

"Stranded in Space" breaks the cardinal rule of Junk Cinema: it's unlovable.

The hero? Neil Stryker seems more like he's suffering from hemorrhoids than a hunted man on a creepy planet yearning to go home.

His love interest? Dr. Bettina Cooke (Sharon Acker) is as blah as her drab pants suit. She only comes alive when she slaps Stryker's puss.

The villain? Cameron Mitchell's pompadoured hair is scarier than he is.

The scariest thing about The Perfect Order's army of enforcers is they all appear to shop at Dad and Lad. Yuck!

When "Stranded in Space" ends its broadcast day and poor Neil's attempt to escape ends with him finding refuge with a family on a camping trip (don't ask), you could care less. The damn thing is finally over, praise the Lord!

So what have we learned from this experience, kiddies?

That a planet can exists on the other side of the sun and no one will ever notice.

That an entire planet of left-handed people will still drive on the right side of the street.

That pairing a turtle-neck with a blazer is dumb.

That Chrysler Plymouth's are the official cars of Terra. In fact, they are the only cars on Terra.

Cutting back on alcohol consumption is a fine goal, but banning concerts in the park? That's nuts! What are people suppose to do for fun?

Until next time movie lovers, SAVE THE MOVIES! 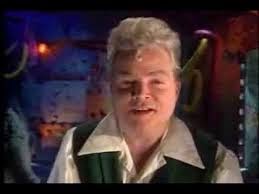 TV's Frank (Frank Conniff) was 100% right about "Stranded in Space": It Stinks!