Once More With Feeling! It's "Beastmaster 2:Through The Portal Of Time"! 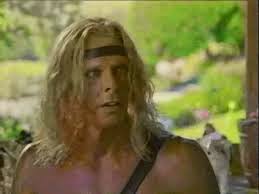 "Oh, dear, his perm didn't take!" Older, but not necessarily wiser, Dar (Marc Singer) returns for "Beastmaster 2: Through the Portal of Time."

Hey, kids, what's the worst sequel of all time?

Believe it or not, it's none of the above. The worst sequel of all time belongs to "Beastmaster 2: Through the Portal of Time" (1991).

"B2" (as I call it) is the ten years later second serving of "The Beastmaster", the 1981 sword and sorcery flick about an ancient Dr. Doolittle named Dar (Marc Singer in his greatest role EVER) and his quest to avenge the deaths of his family, friends and pet pooch at the hands of the evil Jun army, which was headed by an evil priest named Maax (Rip Torn in the most embarrassing role of his career).

Besides being the beastmaster, Dar is also the long-lost son of King Zed. He doesn't realize this because A) as a baby Dar was kidnapped from his mother's womb and transplanted by an evil witch into a cow's womb, thus ensuring that B) he could be kidnapped and later sacrificed by the evil witch. Baby Dar was saved by a poor farmer who A) also didn't realize Dar was King Zed's son and B) raised him as his own but C) eventually realized Dar had special abilities with critters.

As you can see, "The Beastmaster" had its own lame-brained charms. Unfortunately, "B2" is only lame-brained. That's because, except for Marc Singer and the ferrets, nothing in "Portal of Time" references, revives or continues the saga of Dar and his beastmastering abilities. 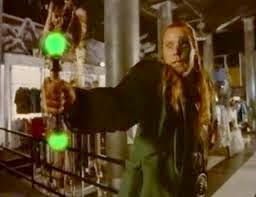 Wings Hauser waves his magic wand in "B2". Where is Rip Torn when you need him?

Instead, "B2" gives us--not that we asked for it, mind you--a completely new story that is an unsavory mix of sword and sorcery/time traveling/fish-out-of-water/bad '90's hair/bad '90's rock/and bad F/X that never congeals into anything coherent or entertaining. Instead, it merely stalls and sputters like an over-heated Yugo in rush hour traffic--and manages to make the original flick look good by comparison.

With Rip Torn unavailable because of his character's demise in the first flick, the baddie role in "B2" is taken up by Wings Hauser, a beefy fellow who resembles Sam Kininson, Meatloaf , Kiefer Sutherland  and the Phantom of the Opera all rolled into one.

When we first meet him, Arklon (as the baddie is called) has captured beastmaster Dar and has condemned him to death for, among other things, siding with rebels who want to unseat him and for "practicing witchcraft". Arklon also sneers at Dar's talents with animals. This the despot will regret, especially when he commands his henchmen to chop off Dar's noggin. Why? Because Sharak the eagle will poke Arklon's eye out, Ruh the tiger (no longer black) will slaughter his goons and ferrets Kodo and Podo will release Dar--who will then proceed to stab, hit, punch and kick Arklon's remaining troops in their respective crotches before fleeing into the night.

Our story then shifts to a rag-tag group of rebels out on patrol. When their nominal leader wants to know if Arklon's flunkies are in the vicinity, he calls out, "Bring the witch!" That would be Lyranna (Sarah Douglas), a hip swaying Jennifer Beals-type who can "see" things. The rebel leader warns Lyranna that her "visions" had better be truthful or he'll cut her "black heart out of (her) bosom." This causes the witch to parry back, "Surely such a valiant warrior such as yourself you can think of a better use for my bosom."

The fellow probably can, except an arrow through his neck ensures he won't be able to act on them.

Suddenly, the poor rebels are beset by Arklon's troops and Arklon himself, who wields a very bizarre weapon indeed: an old fashioned phone receiver. An old fashioned phone receiver that shoots lasers, no less. When all the dust settles, only Lyranna is left standing. Arklon wants her dead, naturally, but the wily witch insists that she knows where the one-eyed Arklon can get his mitts on the ultimate weapon and rule the world unchallenged.

I must interject here and point out that Arkon ALREADY HAS such a weapon and ALREADY IS ruling unchallenged. After all, what could possibly top a phone receiver that shoots lasers?

How about a neutron bomb? 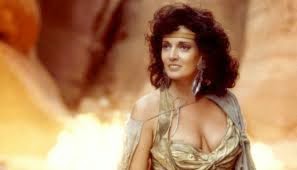 "Is this the set for 'Conan the Barbarian'?" Evil witch Lyranna (Sarah Douglas).

See, Lyranna has discovered a magic portal that leads to 1991 L.A. In her spare time, the witch has been hopping back and forth between dimensions, picking up '90's slang ("You are are so hard to take a meeting with!") and taking stock of US weapon capabilities. Lyranna convinces Arklon that having The Bomb will make him truly the boss of everything and put his laser shooting phone to shame. In return for helping the baddie Arklon snatch the weapon of mass destruction, Lyranna wants to be his queen.

Arklon's queen? "Well, I certainly don't want to be your maid!" Lyranna huffs.

While all this is happening, Dar is tramping around in a swamp. It's there he meets a long-lost relative that resembles a talking tree. This leafy sage tells Dar that he has an elder brother who must be killed or the world will go kaput. Dar pleads with the tree person to identify his bad seed brother, but the relative just stomps off to die. Not very helpful, would you say?

I'm going to interject again and suggest that Dar's unknown bad seed big brother is Arklon. Who's with me?

As if "B2" didn't have enough going on, we are introduced to one final character, an annoying Valley Girl twerp named Jackie Trent (Kari Wuhrer). She crash lands into Beastmaster territory through that magic portal Lyranna is always babbling about. Of course, she is so dumb that she doesn't realize what has happened. Instead, she chirps such lines as "Where is the auto club when you need them?" and "Ever hear of the 'middle of nowhere'? Well, this is it!"

Of course, it's preordained that Jackie will meet up with Dar and still have no idea that she's not in L.A. anymore. She variously thinks the Beastmaster works for the circus or is one of those off-the-grid-loner-types and at one point asks, "Dar, were you raised by wolves?" Even worse than her stupidity is Jackie's constant stream of one-liners. When she and Dar are sitting around a campfire, they hear the howling of "The Lost Hounds" who, explains Dar, "stalk the night, looking for souls to drag down into the abyss." 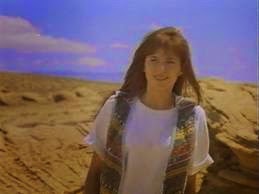 Later, when Dar and Jackie are tramping around in the desert, they come upon soldiers on horseback. "Who are those geeks?" she asks.

They happen to be Arklon's goon squad and they have orders to capture "the outsider", as they call Jackie. This they do, but once the L.A. airhead is dumped on them, Arklon and Lyranna can't stand her anymore than anyone else.

When Lyranna shows Jackie the magic portal, all she can do is coo, "Way rad!" Later, when Arklon demands that Jackie provide him with the necessary info to nab a neutron detonator, she squeals, "I'm loaded with information! I watch 'Jeopardy' every night!"

After enduring several more of these inane bon mots, you can't help but root for Arklon to pistol whip the little jerk.

In final analysis, Kari Wuhrer's performance in "B2" makes Kathy Ireland's performance in "Alien From L.A." look like a masterful piece of nuanced underplaying--and is one of the key reasons why this flick's reputation as an example of cinematic backwash is so richly deserved.

"Let's see, do I have everything? Tiger? Check. Eagle? Check? Ferrets? Check." Dar prepares to save the world.

Of course, it goes without saying that Arklon, and Lyranna will drag Jackie back to L.A. so they can get their nuclear bomb and Dar and his animal buddies will follow in hot pursuit. There will be culture clashes and confrontations, car crashes and sword fights, good will defeat evil, Dar will off Arklon and Jackie will continue to chirp like a demented chipmunk. Finally, our mismatched duo will say goodbye. Dar will return to his world and Jackie will hopefully shut-up.

It's not often that a genuinely bad movie is followed by a sequel that is even worse, but "B2" manages this amazing feat. Of course, many elements were involved in making "B2" so very, very bad: a horrible script, an uneven tone, cheap-o F/X and a truly annoying heroine all played their part.

You also can't forget the acting of the principals, either. As baddie Arklon, Wings Hauser struts about and fondles his long hair, but he's no match for the scenery chewing theatrics of Rip Torn. Sarah Douglas' Lyranna seems as if she wandered over from the set of "Dynasty", as her hair-tossing, nostril-flaring histrionics seem better suited to a night time soap opera than a mixed-up swords and sandals epic. Marc Singer, meanwhile, is still plenty ripped as Dar, but his bleached blonde hair and stringy perm are not flattering. Even though he is the nominal star of the show, Singer's role in the sequel is actually pretty small. As always, the acting honors ultimately go to the critters, but even they seem off their game this time around.

In the final analysis, "Beastmaster2: Through The Portal of Time" is just more proof that sequels to hit movies are just a waste of money--for the producers and the audience. Lightening rarely strikes twice; there is no guarantee that a sequel will recapture the spirit of its predecessor. Sequels are just a cynical ploy to ring cash out of a familiar name.

In the case of "B2", the filmmakers did something even more incredible: they took an already bad movie and made it even worse!

So, until next time, accept only originals, and SAVE THE MOVIES!

Email ThisBlogThis!Share to TwitterShare to FacebookShare to Pinterest
Labels: "Beastmaster2: Through the Portal of Time", "The Beastmaster", bad fantasy movies, bad sequels, Marc Singer, sequels, sword and sandals epics, the worst movie sequel of all time.