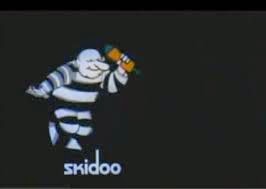 The dancing mascot of "Skidoo". Created by credit genius Saul Bass, it's the best bit in the move.

According the old saying, if you do remember the '60's, you weren't there (rim shot).

Conceived as a no-holds-barred culture clash comedy, "Skidoo" was a legendary box-office bomb for writer/producer Preminger, the Richard Burton of filmmakers. Despite his talent, Otto, like Richard, is better known for his many misses than his hits. For every "Laura" or "Anatomy of Murder", there is "Saint Joan", "Tell Me That You Love Me, Junie Moon", "Rosebud", "In Harm's Way", "Hurry Sundown" and "Such Good Friends"--a flick one critic likened to "a closet full of smelly underwear".

Even with that impressive list of flops to his credit, "Skidoo" may be Preminger's ne plus ultra of flop flicks. 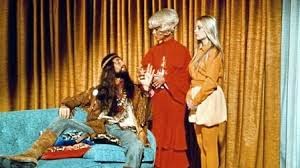 Jackie Gleason is "Tough Tony" Banks, a retired mob "torpedo" (hit man), now living as an honest businessman in the California suburbs. Carol Channing is his ditzy wife Flo, who had quite a racy past before they married. Alexandra Hay (of "The Love Machine") is their daughter Darlene--at least, that's what Channing claims.

On a typical evening at home, Tony and Flo are fighting over what to watch on TV. Each armed with a remote control, husband and wife switch back and forth between the channels, cutting between commercials, various movies and even a senate hearing. Fed up, Tony storms into the kitchen to make a snack, only to discover his college-bound daughter sitting in a parked car with (gasp) a hippie!

This gentleman's name is (oh, how telling) Stash (John Philip Law, also of "The Love Machine"). He sports the usual hippie garb of long hair, love beads and a headband. This causes Tony to snarl, "Who's your tailor? Sittin' Bull?" Stash also spouts the usual hippie babble: "You know what I dig? Nothin', man. 'Cause if you can't dig nothin', you can't dig anything. You dig?"

This deeply impresses Darlene, who muses, "If I could be nothing, I could be anything."

Stash also dreams of a world where butterflies are free and there are organic supermarkets on every corner, so no wonder Gleason pops a blood vessel when he learns his daughter is dating this freak.

God (Groucho Marx) calls Tony home: Boy, did he get the wrong number.

Believe it or not, Tony soon has bigger problems than his kid's long-haired beau. He's visited by mobsters Henchy (Cesar Romero) and Angie (Frankie Avalon), who come on behalf of Tony's old mob godfather, simply known as God (played by Groucho Marx in his last film appearance).

It seems God wants Tony to break into Rock Island Federal Pen and rub out stool pigeon "Blue Chips" Packyard (Mickey Rooney), formerly Tony's BFF and Darlene's godfather. At first, Gleason refuses, insisting God released him from mob chores 17 years ago. However, when Tony finds his pal Harry (Arnold Stang) sitting in a car with a bullet through the head, the retired wiseguy glumly goes back to work.

Once inside the joint, Tony meets his cellmates: Leech (Michael Constantine, the principal on "Room 222") and Austin Penelton, known as Professor Fred. Fred, you see, is doing time because he burned his draft card. He's also a technical genius who has renounced technology and eats only brown rice.

Oh, yes, and one more thing: Fred carts around a stack of paper soaked in acid.

Hmmm, that could cause problems, couldn't it? I mean, if someone accidentally got in to it...

While Tony awaits his instructions, wife Flo is aghast to learn that Darlene, covered head to toe in body paint, has been arrested with Stash and about 30 other long-haired, pot smoking, folk singing hippies. To prevent her daughter from running away with this flower power mob, Channing invites the whole group back to their place. Soon, the Bank's dream house has become a hippie crash pad, complete with sitar music. Of course, the uptight neighbors are fit to be tied, but what else could a mother do?

Still cooling his heels in prison, Tony writes Flo a letter and then licks the envelope. Uh oh! The horrified Fred informs Tony that the paper was soaked in acid. "You mean LSD?" Gleason gulps. Is there any other kind? Soon enough, Tony is on a trip, complete with melting walls, vivid colors, floating heads, imaginary flies to swat at and his room mates shrinking to the size of Smurfs. Gleason sweats, laughs, screams and then asks for a flower. Once the trip is over, Tony has "lost his ego" (according to Fred) and is thus a changed man. That means the hit is off. 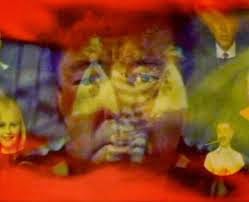 So how can Tony escape Rock Island and get back to his family, especially when he learns Darlene is being held captive on God's yacht? (FYI: God lives on a yacht in international waters with his statuesque companion, the insatiable Luna, to escape arrest. George Raft is his captain.)

That's easy. Professor Fred spikes the prison's water and food supply with LSD. The resulting mass freak out is "Skidoo"s showcase sequence. To ensure the artistic integrity of the cinematic trip he was to film, Preminger supposedly dropped acid with Timothy Leary. While you can admire Preminger's commitment to details, I doubt any acid trip resembles the one Otto presents.

Everybody from the prisoners to the guards to the visiting warden (Burgess Meredith) to the kitchen staff to the phone operators suddenly go bonkers. They sing in slow motion. They form daisy chains. Convict Frank Gorshin ("The Man") sees visions of himself as an angel. The tower guards watch pop-eyed (and so will you) as garbage cans come to life and dance to a Harry Nilsson song. This little musical interlude is called "The Garbage Can Ballet". A sample of the lyrics? "Oh, oh, oh, the great garbage can/Is a tribute to the ingenuity of man/Where corn and tomatoes mix with potatoes/And get thrown together with ham/And succotash and a piece of hash/ Can get together and have a bash..." The ditty ends with the lines, "Life is always equal in the can." Then the Green Bay Packers show up--nude, mind you--except for their helmets and shoulder pads to run a few plays. Meanwhile, Senator Peter Lawford gives his presidential acceptance speech and warden Meredith proclaims the "ideal prison" will teach macrame and modern dance.

Can you dig it? 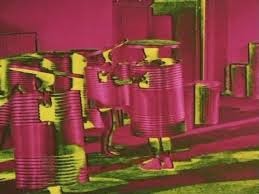 Do not adjust your set: "Skiddo"s infamous dancing garbage cans prepare to cut a rug. Watch the sequence on "YouTube" if you dare.

While the prison population is tripping the light fantastic, Tony and Fred make their getaway in trash cans tied to helium balloons. Their destination? God's yacht. However, they aren't the only ones. Converging on that very craft is Flo, dressed in a mini skirt and tricornered hat, with a flotilla of hippies.

As dopey and embarrassing as this number is, Channing totally throws herself into it. When it's all over, you can't help thinking, "What a pro."

The scene on God's yacht, of course, is total mayhem, with hippies and gangsters fighting, dancing, singing and taking drugs together. Gleason searches for his daughter, runs into wife Flo and the bickering mob couple have make-up sex. Then George Raft marries mobster Angie (Frankie Avalon) to the insatiable Luna--who starts making out with Henchy. A hippie then marries "this brother to this sister", meaning Stash and Darlene. And God? He and Professor Fred have ditched the love-in to sail away in a psychedelic sailboat dressed as Harri Krishna's. Fred offers Groucho a joint, who promptly inhales and then declares, "Mmmm, pumpkin!"

"Skidoo" is all over except for the credits--and you will want to watch the closing credit sequence, because Harry Nilsson sings the name of each and every member of the cast and crew, right down to the lowliest worker on the production staff. Now, the movie is over.

"23 Skidoo!" Flo and Tony get hip to the swingin' sixties.

"Skidoo" wants to be seen as a hip, irreverent, fly-by-the-seat-of-your-pants comedy. But director Preminger is too much of a tactician and control freak to helm such a free-flowing production. The movie just seems off, from the flat jokes to the usual '60's stereotypes to the kooky musical numbers. It's clear Preminger wanted to show the kids that an old Hollywood hand could groove to the times; any kids who actually saw the flick weren't fooled. Neither, as it turns out, were their parents, because "Skidoo" was one of the decade's biggest bombs.

It was also one of the most obscure box office bombs of the decade. "Skidoo" never appeared on TV, not even on the late, late, late show. When VCRs came out, nobody clamoured for "Skidoo" to make its VHS debut. And it was years before "Skidoo" came out on DVD. Nobody wanted to see this movie ever again--including the people who made it! The only ones to show "Skidoo" any love were dedicated Junk Cinema Lovers, but we are, shall I say, a very particular bunch.

In the end, "Skidoo" seems to prove that the '60's mantra "Don't trust anyone over 30!" was sage advice, at at least in this case.

Therefore movie lovers, until next time, question authority, and SAVE THE MOVIES!