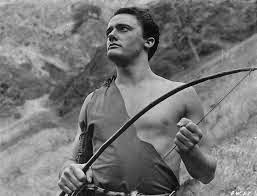 Arrested development? Before he was "The Man From U.N.C.L.E." Robert Vaughn was a "Teenage Caveman".

Today's featured flick takes place when the world was young, when stop-motion dinos (pinched from "One Million BC" and "Robot Monster", respectively) roamed the earth and Roger Corman, King of the Budget Busting B Picture, ruled the drive-ins.

It was during this fabled epoch that the Corman Film Factory churned out (for $70,000 bucks) "Teenage Caveman" (1958), a coming-of-age/semi-romance/adventure tale where a 30ish Robert Vaughn ("The Man From U.N.C.L.E") dares to defy the elders of his tribe and seek his fortune beyond their scrubby little encampment (also used for "Night of the Blood Beast").

Vaughn, his hair Brill Creamed to perfection and sporting no trace of a beard, constantly pesters his dad (Leslie Bradley) about why their people cannot venture beyond the river.

"It's forbidden by the law!" thunders dad, probably for the billionth time, "The law that's given in good." 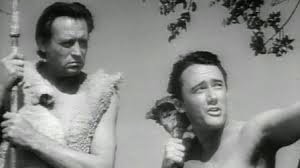 Leslie Bradley ("The Symbol Maker") is unconvinced by his son's (Vaughn) pleas that they find a better camp site.

OK, fine, sure, but besides the law, Vaughn wants to know what else prevents the tribe from venturing beyond "the burning plain"?

How about "shadows cold and dark", "dirt that eats men" and "a god that gives death with its touch", dad replies--although he admits he's never seen or experienced these things himself.

Vaughn, repeatedly called "boy" through out the flick (nobody in the movie has a proper name), still isn't convinced. This causes pops to sigh and caution his son that the land beyond the river "promises a lot, but only gives a place to die."

After they return home, Vaughn hammers the elderly "Keepers of the Gifts" on what sort of satisfaction they get  by constantly A) tending a puny fire, B) spinning a prehistoric Lazy Susan and C) building and then breaking objects.

The "grey beards" tell Rob that these are the three "great gifts of man." As always, the impetuous boy is never satisfied with these pat answers and wanders off to sulk. 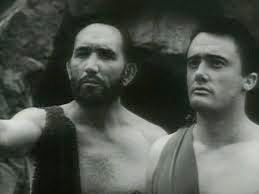 Meanwhile, hobbling around on a bum leg (and in an ugly costume) is Frank De Kova. The future star of "F Troop" has his eye on Vaughn's cuddlemate Darah Marshall, known to all as "the Blond Maiden." In fact, baddie De Kova spends half his waking hours trying to convince Blondie that Rob's insatiable curiosity will get the better of him and "he won't make it to the rights of manhood." Then De Kova turns right around and spends the rest of his waking hours encouraging Vaughn to journey beyond the river--hoping the boy will run afoul of the "god that gives death with its touch" or some of that man eating dirt, thus making the Blond Maiden more receptive to his clammy advances.

Being the dumb head strong kid he is, the boy finally convinces his fellow cave buddies (including Corman regulars Jonathon Haze and Ed Nelson, the latter in a really bad blond wig) to join him on a hunt beyond the river. There they run afoul of some stock footage and the Fair Haired Boy (Beach Dickerson) drowns. But don't fret about that; Dickerson has four parts in this flick. Not only is he the Fair Haired Boy, he also impersonates a rampaging bear, plays a member of another tribe and mans the cymbals at his own character's funeral.

While the rest of his buddies run home, the boy stays behind. Actually, he runs head long into a tree and knocks his prehistoric self out. When he comes to, Vaughn decides to scope out the forbidden zone. He bags himself  a squirrel, invents the bow and arrow and creates the world's first pan flute. Except for a brush with some wild dogs (last seen in "The Viking Women and the Sea Serpent"), the boy is totally having a great time. Leave it to his perpetually pissed off pop to harsh his buzz and drag Rob back to their encampment.

As punishment for his wandering ways, Vaughn is shunned, but that doesn't last long, because the Blond Maiden is then telling Rob that they should move in together. 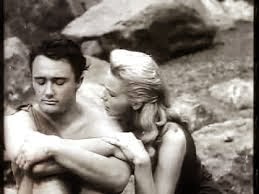 The Blond Maiden (Darah Marshall) consoles her caveman crush after he returns from an illegal trip beyond the river.

"We could make a place to lie down on," she pants. "Spread the furs on the floor so the cold won't get us."

It's an offer Vaughn can't refuse. Soon enough, he's digging away, which arouses the suspicions of De Kova. When the meanie learns that the boy has claimed the Blond Maiden as "his woman", he is fit to be tied--and even more determined to get rid of the pesky teen.

Of course, as seasoned viewers of Junk Cinema know, the tensions between Vaughn and De Kova will soon lead to a violent confrontation/climax. Their quarrel is perhaps less about who gets to bed the Blond Maiden (although, frankly, De Kova never had a chance) so much as which direction their tribe will take in order to survive. Will they embrace the new or stick with the old ways? Do you even have to ask?

As if these Cromagnun conniptions weren't diverting enough, suddenly "the god that gives death with its touch" wanders into the encampment. Unfortunately, as gods go, this one is rather lackluster: he resembles a really cheap, crusty, worn out chicken/parrot mascot costume from junior high. But hold on to your corn nuts, because this chicken/parrot god has a secret: he's an astronaut!

See, the prehistoric world Vaughn and his fellow cave dwellers are cavorting in is really--SHOCK! GASP! HORROR!--the remains of a post-apocalyptic society! Ha! Ha! Fooled you! 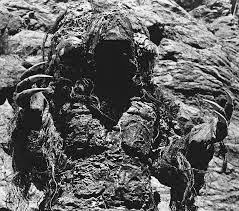 "The God Who Gives Death With Its Touch" just wants a hug.

While the astronaut was in space, the world had a nuclear war. Bummer! When the space crew arrived home, everything was totally nuked out. Luckily, the astronauts' space suits kept them from dying of radiation poisoning, but had the unintended side effects of A) contaminating everybody they came in contact with deadly radioactive poison and B) scaring the pants off folks as well. For decades the space crew wandered the now prehistoric planet trying to contact people, but they slowly died off. The chicken/parrot fellow was the last of his group. Inside his weathered protective suit was even a book about the joys of the atomic age. OOOOOh, the stinging irony!

Thus, "Teenage Caveman" ends with the men folk of the tribe venturing out into the wilderness beyond the river. No more will they be fearful of the unknown or hostage to goofy philosophies. They will explore, prosper, build, reach out to others of their kind--but, the narrator wonders, will they repeat the mistakes of the past or learn from them?

This, by the way, is also the ending "Yor, Hunter From The Future" used. Wanna bet which society was the most successful?

When critiquing a Roger Corman film, one must consider the follow facts before passing artistic judgement:

1) Corman movies were shot on ultra-cheap budgets, on ultra-short schedules and recycled the same props, locations and actors as much as possible.

2) Corman also fleshed out his movies with stock footage, which was not as seamlessly edited into the final cut as it could have been.

3) Folks in Roger Corman movies walk around a lot and often have deadly, dull conversations--which is why having guides like the MST3K people (or me) is a good way to familiarize yourself with Roger Corman flicks until you are experienced enough to watch them on your own. 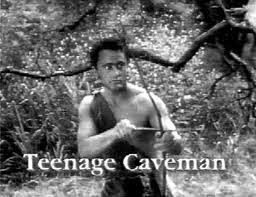 Once you take all that into account, "Teenage Caveman" is a fine example of late 1950's drive-in fare. It's unintentionally hilarious, has a heavy handed message, features "teenagers" who look moments away from a mid-life crisis and boasts the goofiest chicken/parrot god/monster you will ever see. Throw in Frank De Kova in a furry tunic and a deeply embarrassed Robert Vaughn and you have a can't-miss caveman calamity that only a true bad movie master could conjure up.