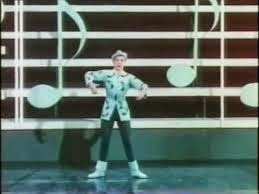 Hey kids! Are you feeling moody and depressed, anxious or worried? Is your voice changing? Are developing (or not developing) breasts? Are pimples, an oily scalp and/or hair on your legs suddenly becoming a problem?

Girls: has your "Aunt Flow" started her monthly visits?

Boys: do you live in terror of being the victim of a double jock lock in gym class?

In short, has your world turned upside down and you don't know why?

Relax! You are merely going through puberty, a time of intense physical and psychological change! And if you are at a loss as to how you are going to navigate this mine field of hormones, anxiety, fear, exhilaration, social awkwardness and peer pressure, don't give it another thought! 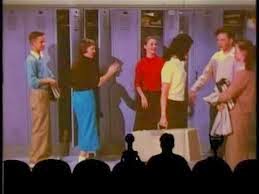 The hapless Buzz (far left of the photo) yearns to fit in like the other hip kids at school.

Because Mr. B Natural is here!

Who is Mr. B Natural, you ask?

Why Mr. B Natural is the star of the greatest, goofiest, nuttiest, wackiest, most bat-shit crazy "Mental Hygiene" short ever made!

A 27-minute hysterical harangue produced in 1956 by Kling Film Productions for Conn Instruments, "Mr. B Natural" aimed to help kids manage puberty by "discovering the fun and joy in music". Once they discovered this fun and joy, kids were then encouraged to join their junior (or senior) high school band playing (what else?) Conn Instruments. 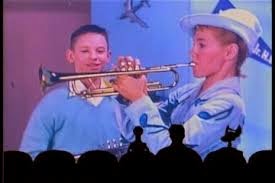 "Just put your lips together and blow": Mr. B teaches Buzz how to wail.

The star of "Mr. B Natural" is an ambiguously androgynous "hep pixie" (in Conn's words) played by the hyper perky Betty Lustre.

Flaunting a flared cape, blue tights, pixie boots and a beanie, "Mr." B Natural flits, frolics, scampers, cavorts, bounces and gads about this short like a Smurf on crack. Mr. B also has an unnerving tendency to chirp such lines as "Knew you father, I did!", "Don't be too sure that I wasn't in the Garden with Mr. and Mrs. Adam!" and "A clarinet isn't just a clarinet; it's a happy smile!" with alarming frequency.

With all due respect to Ms. Lustre, who was merely following her director's instructions, the net result is a frightening, over-the-top menace who is more likely to inspire terror in the hearts of young people than "the joy of music."

Teen Buzz (Bruce Podewell, who's real nickname was Buzz) is a shy, awkward junior higher with a crush on Jeannie, "the cutest girl in school." When Jeannie invites Buzz to join the gang over at her house to try out the newest dance steps, he demurs. See, our hero believes he has no musical talent and has two left feet, and he doesn't want to disgrace himself in front his lady love, so Buzz fumbles an excuse about going home to work on a "history essay" instead. 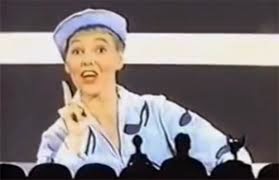 Betty Lustre is Mary Martin as Peter Pan as Mr. B Natural.

"Suit yourself," Jeannie shrugs and the gang leaves the poor dope in the dust.

It's in Buzz's lonely bedroom that Mr. B Natural appears, shrieking like a dental drill and telling Buzz that his adolescent angst can all be cured by taking up the trumpet.

Buzz's parents, equally alarmed by their son's lack of popularity, are more than happy to buy the horn from Conn Instruments--anything to avoid having their kid be a social flop! And soon enough, Buzz is jamming away and becomes more confident, out going and popular with every note.

"Mr. B Natural" ends with Buzz playing for a school dance and impressing Jeannie with the length of his trumpet solo. His/her work done, Mr. B Natural flits off in search of other lost souls to help. The short's final image is a scary super close-up of Mr. B's smiling face. Like the perpetually frozen grin of ring wing activist Phyllis Schafly, Mr. B's demonically smiling mug is pure, 100% nightmare fuel, guaranteed to haunt your dreams for years to come.

Once more, we can thank the folks at "MST3K" for unearthing and featuring this atrocity on their show back in 1991. The SOL gang paired it with "War of the Colossal Beast", the sequel to "The Amazing Colossal Man", and it became a fan favorite. Ken Smith, meanwhile, also featured "Mr. B Natural" in his excellent book Mental Hygiene: Classroom Films 1945-1970. This tome is by far the best resource for learning EVERYTHING about the genre of "educational" or classroom films, from the directors and production companies to the films themselves (which covered every topic from how to improve your spelling to how to avoid getting VD). 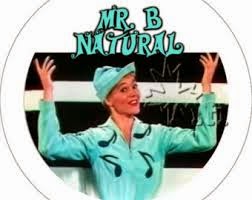 A gem like "Mr. B Natural" is also another reason to love, love, love Junk Cinema. Where else but in the Junk Cinema universe will you find this type of a flick? The Conn Instrument people and Kling Film Productions had only the best of intentions when they made "Mr. B Natural"--but as we all know, the road to ruin is paved with good intentions! If you were going to make a short subject encouraging kids to take up musical instruments, would you have it star a "hep pixie" of indistinguishable gender who had breasts and a high pitched voice?

Of course, "Mr. B Natural" isn't the only gonzo short out there. Consider the Oscar winning mini-flick "Bill and Coo", a love story set in "Chirppendale", starring an all bird cast. Then there is "The Home Economics Story", where high school girls are relentlessly pounded into studying Home Ec in college to prepare for such "exciting careers" as becoming "a tea room manager" ("Thousands of customers eat out every day and never realize she's the boss!" the narrator marvels). And who can forget "Adventures in Home Decorating" where 1950's housewives are encouraged to cover every inch of their homes in "the wonder product" of Formica?

So, movie lovers, grab yourself a view of "Mr. B Natural", buy a copy of Mental Hygiene by Ken Smith and help me SAVE THE MOVIES!