The TV series "Dynasty" was by far the glitziest, glossiest show ever to appear on network television. Supposedly set in the worlds of high finance and oil production, it was really about the scheming and double-dealing ways of the very rich, principally the Carrington clan. And because "Dynasty" was produced by the Sultan of Schlock Aaron Spelling, everything on this show was way, way over the top. Everyone's hair was pouffed sky high; the shoulder pads gave every frock worn the wing-span of a 747; the ladies all swished around in Nolan Miller gowns, while all the gents paraded about in Nolan Miller tuxes; people traveled via jets, rolls and spiffy sports cars; and the entire cast played musical beds with friends, enemies, rivals, employees and the occasional spouse (not necessarily their own).

My favorite among the sprawling "Dynasty" cast was Amanda Carrington, the "secret", quasi-illegitimate daughter of Blake and Alexis. She was played by the frozen-faced Catherine Oxenberg, an English/Serbian blue blood whose mom was born Princess Elizabeth of Yugoslavia.

Despite her tony accent and exotic lineage, Oxenberg's acting skills were rather pedestrian. That was no problem on "Dynasty", where bugging one's eyes, flaring one's nostrils, tossing your head, throwing drinks in someone's face, slamming down the phone and marching off in a huff were the order of the day, not acting. Catherine Oxenberg runs the gamut of emotions from A to B as Amanda Carrington.

As Amanda, Oxenberg changed her outfits more than her facial expressions. Her most common pose was to stare into space with the look of dull surprise. She could on certain occasions pout and even squint her eyes. Thus, for her entire stint on "Dynasty", no matter what crisis befell our heroine, Catherine displayed the emotional range of a very over-dressed crash test dummy.

True to the show's over-the-top soapy histrionics, where characters painted their rival's offices with poisoned paint and tossed each other into fish ponds, the "Dynasty" scriptwriters gave Oxenberg a suitably daffy story line. After flouncing into Denver announcing her connection to Alexis via a tell-all newspaper interview ("You little bitch!" mommy Alexis hissed before slapping her), Amanda searches for her "real" father (it's Blake, of course) and develops a fixation on mummy's latest hubby, the gravelly-voiced Dex Dexter. Dex, naturally, insists he only has eyes for Alexis. In hopes of making her step-daddy jealous, Amanda begins an on-and-off flirtation with Prince Michael of Moldavia (a real country in Eastern Europe, although for the show's purposes, it was relocated to somewhere in the Mediterranean).

Alexis, of course, is delighted that a genuine royal is taking an interest in her daughter. Turns out Michael's pa King Galen (don't you love these names?) had a romance with Alexis years ago that his parents put the kibosh on when it got too serious.

Poor Amanda can't decide if she loves or hates Dex or if she truly loves Prince Michael or just enjoys using him to annoy Dex. In due time she hops between Michael's royal bed covers (which, we were lead to believe, were quite crowded) and even takes a shower with him. Looks like true love to me! Then at breakfast, Prince Michael lowers the boom: he's engaged to the Duchess Elena of Brana. Amanda reacts to this news in true "Dynasty" fashion: she bugs her eyes, juts out her chin and stomps off to get dressed.

What's a poor girl to do? Well, in Amanda's case, not much. It's mom Alexis who springs into action, convincing her ex-cuddlemate the king to allow Michael to marry Amanda in exchange for some hefty financial investment in Moldavia. This wheeling and dealing is interlaced with the push-me-pull-you drama between Dex, Amanda and Michael. At one point, Amanda arranges to meet Dex, where she informs him that Michael has proposed. Dex encourages Amanda to accept, which causes her to wail, "How can I when it's you I love?" The granite-faced Dex insists for the hundredth time that he loves Alexis. Amanda then scrunches up her face and screams, "I hate you!" and runs off. Of course, Amanda decides to marry the prince, but that only leads to more complications and conniptions. 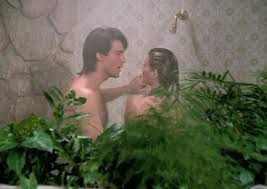 "Can you pass the shampoo?" Prince Michael and Amanda enjoy a steamy moment.

Remember the Duchess of Brana? Well, no sooner has the royal wedding been announced than ex-fiance Elena begins throwing her aristocratic weight around. She insists on telling anyone who will listen that Prince Michael loves her and that Amanda isn't cut out for the royal drill. Elena even slinks into the prince's bedroom, declares her love for him and promptly strips naked. Who should suddenly stumble in but Amanda? Horrified, she pulls off her pricey engagement ring and stomps off.

Things get ironed out, after a fashion, because the show is heading for "The Moldavian Massacre", the ultimate "Dynasty" season-ending cliff-hanger. Amanda and Michael no sooner say "I do" than a platoon of commandos burst into the church and shoot up the wedding party, invited guests, dignitaries and possibly even the catering crew. Who survived? Who didn't? In those pre-Internet days, magazines, newspapers, tabloids and TV morning shows endlessly debated this state of affairs. "Dynasty"s ratings and popularity were at its peek. Unfortunately, the long awaited season premiere was a total let down. Only two cast members (Ali McGraw and Billy Campbell) and the predictable posse of the extras were offed; everybody else was just fine, thank you. That included Amanda, who had neither a hair out of place nor a smudge on her puffy gown.

Concerning "The Modavian Massacre", I have always had a few questions.

Question #1: Why wasn't the Moldavian royal wedding televised, at least in Moldavia? When the Crown Prince of Greece married heiress Marie-Chantal Miller in England, the wedding was televised in Europe and in Greece, even though the Greeks threw their royals out in 1969. 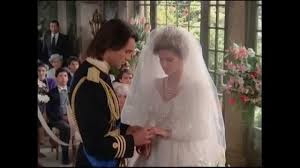 "With this ring I thee dread..." Prince Michael and Amanda make it legal.

Question #3: How could all those commandos spray all those bullets into a church and only two people die?

Question #4: What kind of government did the revolutionaries in Moldavia want to replace the monarchy with? Communist? Socialist? A republic? A junta? Military dictatorship?

Question #5: Didn't anybody think it was a bit odd that the king's head of security was a weaselly guy named Yuri who sported a black eye-patch?

Naturally, the marriage of Michael and Amanda doesn't survive the upheaval in Moldavia and they divorced. Catherine Oxenberg didn't stay with the show much longer, leaving over a contract dispute. Although she appeared in several TV movies (including a badly received remake of "Roman Holiday") and the feature "In the Lair of the White Worm" (co-starring Hugh Grant), appearing on "Dynasty" became Catherine's best known role.

Of course, it's only in the wonderful, funderful world of Junk Cinema that a show like "Dynasty" could exist--and Catherine Oxenberg is one of the many interesting personalities you will find there. Her mom, born Princess Elizabeth of Yugoslavia remember, would marry four times and become engaged to Richard Burton. Catherine is also related to every royal house in Europe and can claim Catherine the Great as a relative. Where else but in Junk Cinema would a real European blue blood end up on a prime time soap opera cast as "the secret daughter" of Joan Collins (now herself a Dame) who marries and divorces a prince? In fact, Catherine would play a princess a total of four times in her career: twice as Princess Diana, once in "Roman Holiday" and then on "Dynasty". Later on, Catherine would appear in a reality show titled (what else?) "I Married a Princess". 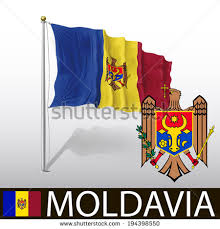 The flag of Moldavia