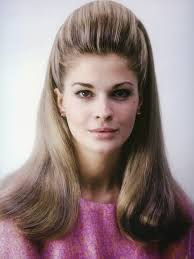 Before she won our hearts (and five Emmy Awards) as the take-no-prisoners TV journalist Murphy Brown, before she co-starred in the quirky drama series "Boston Legal", before she earned an Oscar nomination for her turn as a tone-deaf disco singer in "Starting Over" and before she published two best-selling memoirs (Knock Wood and A Fine Romance), Candice Bergen was one of the premiere cheese whizzes of her generation.

Starting off as the ice cold "Lakey the Lesbian" in 1966's "The Group", Edgar Bergen's little girl (and Charlie McCarthy's kid sister) accumulated an astonishing array of cinematic stinkers to her credit. Some were big budget bombs, a few were European flavored art house flops, others were just dumb duds. The net result was that before Ms. Bergen showed the world she could act, she showed the world that she couldn't...repeatedly.

Firmly enshrined now as a national treasure, let's take a long, loving look at the celluloid cheese Candice churned out over the years--a Junk Cinema rap sheet that would eventually earn her a nomination as "The Worst Actress of All Time" by the esteemed Golden Turkey Awards (fellow nominees were Vera Hruba Ralston, Maime van Doran and the eventual winner, Raquel Welch).

"The Day The Fish Came Out" (1967)-- This totally mental "satire" about missing H-bombs on an obscure Greek island featured Candice as the go-go boots-and-hot pants wearing "assistant" to a visiting archaeologist. No more than 21 or 22, Bergen is thoroughly upstaged by her wacky wardrobe and the on-going on-screen hysterics of this over-the-top oddity. Previously reviewed on this blog ("Cowabunga, Dudes! It's, Like, Nuclear Catastrophe!"), "The Day The Fish Came Out" has since become "a cult failure" and a prime example of cinematic over-indulgence on a massive scale. Bergen herself has describe her performance as "terrible." 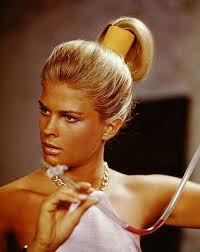 Candice Bergen as a futuristic dental hygienist (actually, a professor's assistant) in "The Day The Fish Came Out."

"The Magus"(1968)-- Based on the novel by John Fowler and starring Michael Caine, Bergen is cast as Lily, the cuddlemate companion of puppet master Anthony Quinn. She spends the whole movie changing into weird costumes and acting even weirder. The movie also takes place on a Greek island, but that hardly matters. In its review of the flick, the New York Times opined that Candice was "not a remarkable actress." Ouch. Bergen herself called the movie "awful" and recalled, "I didn't know what to do and no one told me. I couldn't even scrape together the semblance of a performance."

"The Adventurers"(1970)--With a cast that included Ernest Borgnine, Olivia de Havilland, Fernando Rey, Charles Aznavour and the sensational newcomer Bekim Fehmiu (as the lead "Dax"), this south-of-the-border potboiler is based on the Harold Robbins trash classic. A schlockbuster of epic proportions, Bergen is cast as "poor little rich girl" Sue Ann, who is based (very unsubtly) on the much married Barbara Hutton.

A world famous but broke playboy, Dax deflowers Sue Ann on her 21rst birthday and puts a bun in her oven. The duo marry and Bergen asks her rent-a-hubby to push her on a rickety swing--with disastrous results. Sue Ann and Dax divorce and the jaded jet-setters spend the rest of the movie shedding spouses like a snake sheds skin. At one point, Bergen marries fashion designer-turned-lush Tommy Berggren, but that marriage ends when he finds Candice making out with another woman at a swanky party.  "Well," her husband shrugs, "at least we have something in common."

Candice admitted she did "The Adventurers" "for the money" adding, "Selling out wasn't as hard as I thought it would be." 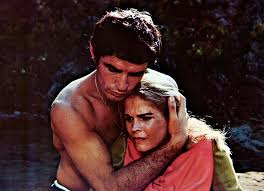 "The Hunting Party"(1971)--Ugh. This is a very brutal, very nasty western where cattle baron Gene Hackman abuses his young wife (Bergen), various hookers and the audience.

Outlaw Oliver Reed kidnaps Candice, believing her to be a schoolmarm. He wants her to teach him to read; she wants to escape, as well as avoid getting beaten and raped. She doesn't make it. Hubby Hackman, meanwhile, heads up a posse to track everybody down. He intends to knock-off the outlaws, of course, and his wife. Why his wife? Because Gene figures the kidnappers will have assaulted Candice and he isn't about to pass off their "little stranger" as his kid. Plus he's just mean.

It all ends, as violent nonsense like this must, with everybody dying in the dust in a hail of bullets. Off screen, Candice was bullied by co-star Reed, who was miffed she wouldn't have an affair with him. In fact, he wouldn't talk to her except when the cameras rolled. Bad form, Mr. Reed.

Oliver Barrett IV (Ryan O'Neal) appears to be affecting a mourning even more prolonged for his wife Jenny than Queen Victoria did for Prince Albert. He mopes at work, he mopes around friends, he mopes on blind dates and he even mopes at singles bars with his father-in-law. Everybody tells him to stop moping and get on with his life, but Oliver can't stop moping. Then he meets peppy department store heiress Candice Bergen...and mopes around even more. Wasn't Candice suppose to help O'Neal move on? Guess nobody told the filmmakers. Or the cast. 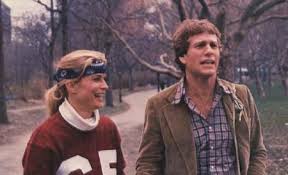 Candice Bergen and Ryan O'Neal try to laugh off the rotten reviews for "Oliver's Story."

It's not often that a bad movie is preceded by a sequel that is even badder, but "Oliver's Story" pulls it off. The shame and the blame rests squarely on the shoulders of Ryan O'Neal, who gives a performance that makes Ali McGraw's obnoxious Jenny look good. Interesting tidbit: film critic Pauline Kael once said the only flair in Ali McGraw and Candice Bergen's acting "was in their nostrils."

"Hollywood Wives"(1985)-- Made during the Golden Age of TV mini-series and based on the best seller penned by the High Priestess of Potboilers (the late Jackie Collins), Candice is cast as the wife of a fading movie star. Fretting that her hubby's dwindling box office appeal will fatally impact her cushy life style, Elaine (that's her character's name) becomes a compulsive shopper to cope. She's even arrested for shoplifting! The horror, the horror.

Featuring more big hair, puffed sleeves, bugle beads and frosted eye shadow than you can shake a stick at, "Hollywood Wives" also co-starred Stephanie Powers, Suzanne Sommers (as a bimbo star who wants to be taken seriously), Roddy McDowell (as a decorator), Angie Dickinson as a big-shot agent and (say it isn't so!) the future Sir Anthony Hopkins.

"The Mayflower Madam"(1988)-- Sydney Biddles Barrow (Candice Bergen) was an upper crust  lady who could trace her family back to the original passengers on the Mayflower, which should earn her the never-ending respect of right winger Ann Coulter. A graduate of the Fashion Institute of Technology, Syd was all set for a career in high fashion...that, sadly, never materialized. Things got so bad, in fact, that she had to accept a job as the phone scheduler for a paid escort service. Eww!

Realizing she was bred for better things, Sydney decides to start her own escort service, but she'll do it with class. Is such a thing possible? Of course not! 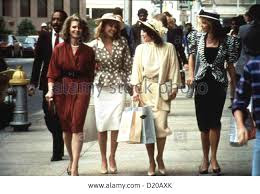 Sisters are doin' it for themselves? High class madam Sydney Biddle Barrows teaches her "girls" how to be "real (80's) ladies".

As the woman dubbed "The Mayflower Madam" sets out to work, she recruits pre-med students and acting hopefuls into her operation--no skanky, chain-smoking, disease ridden crack whores for her! Sydney tutors them on etiquette, takes them shopping, screens her clients and always pays her taxes. Business at "Cachet" is booming and the madam rewards her employees with fun picnics (complete with balloon rides) in Central Park. Sydney is such a super boss, in fact, she even helps one hooker prepare for an important acting audition! (Needless to say, she gets the part.)

But the good times can't last. Soon the police get into the act and Sydney is busted. The uproar over her high class call girl business costs Sydney the love of her rich beau (Chris Sarandon) and her mom is drummed out of the social registrar. In real life, Sydney paid a fine and was unapologetic. The TV movie, of course, had to have Sydney suffer for her sins, which meant her fellow high society snoots gave her the cold shoulder and struck her name off their guest lists.

As Sydney, Bergen has no problem carrying off her character's upper crust poise. Unfortunately, her acting is stiff and wooden, like she didn't have time to rehearse. And her working girls are all standard-issue TV Tropes, all planning on hooking part-time until something better comes along.

"The Mayflower Madam" was Candice Bergen's final hurrah in Junk Cinema, because the next year saw the premiere of "Murphy Brown" and the rest is history. But one could argue that her years churning out cheese were what made Bergen's break-out role possible. A true late bloomer, Candice finally started acting lessons, began accepting scripts for reasons other than money or the location and realized what she did best was comedy, not drama. This hard won knowledge totally turned her career around and her status today reflects that. Candice Bergen: Junk Cinema salutes you! Or, better still, Junk Cinema: Candice Bergen salutes you!

Email ThisBlogThis!Share to TwitterShare to FacebookShare to Pinterest
Labels: "Hollywood Wives", "Oliver's Story", "The Magus", "The May Flower Madam", bad movies of the 1960's and 1970's., Candice Bergen, The Golden Turkey Awards