Watch Marc Singer Talk To The Animals And Rip Torn Disgrace Himself in "The Beastmaster"! 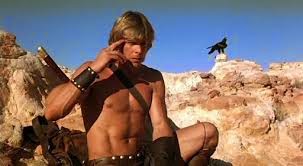 "OK, wait a minute, a message is coming in..." Fabled Beastmaster Dar (Marc Singer) receives a posting from one of his animal contacts in "The Beastmaster".

Every once and a while, a film comes along that is so striking, so unique, that it defines a generation.

The subject of today's article is such a film.

It came out of nowhere in 1982, was made on a modest budget and achieved cult status with repeated viewings on a fledgling cable channel called HBO.

Of course, I'm talking about the one and only "The Beastmaster"!

Our tale of adventure...and non-stop unintentional laughs...begins in some far-off, mythical, generic, pre-industrialized, quasi-medieval kingdom. An evil priest named Maax (Rip Torn, yes, Rip Torn) is conferring with a trio of scantily clad priestesses. These gals may have the figures of Victoria Secret models, but they have the faces of warped mutants who enjoy bobbing for french fries in the deep fat fryer. Of course, Maax hasn't hired these chicks for their looks; he wants them to use their powers to help him usurp the throne of King Zed. 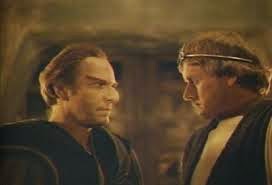 After consulting their bubbling vat of goo, the weird sisters inform Maax that King Zed is the least of his problems. He should concentrate on King Zed's son, because he's the one who is going to off him sometime in the future.

On the plus side, the king's son hasn't even been born yet, so the evil priest with vertical eyebrows has plenty of time to come up with a fiendish plan to scuttle the prophecy--and I must say, Maax's fiendish plan is PURE GENIUS.

First, one of the evil priestesses sneaks into the royal bedchamber with a cow.

Next, she paralyzes the pregnant queen and king.

Using her evil magical powers, the witch transfers the unborn royal baby from his mother's womb into the womb of the cow. This leaves the queen dead and the king frozen like a popsicle, but, hey, it works.

Finally, her deed done, the ugly crone waltzes out of town, with the royal baby snuggled inside the cow, and no one is the wiser.

Like I said, PURE GENIUS. Especially the cow part. 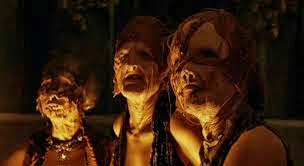 Beauty is only skin deep, but ugly goes straight to the bone: Maax's witch-y trio.

Later that evening, a poor farmer stumbles upon witchie-poo preparing to sacrifice the royal baby. The farmer manages to defeat the evil one and save the tot, whom he adopts and calls Dar.

Dar grows into Marc Singer, a lean, ripped fellow with a pre-Billy Ray Cyrus mullet. On the surface, Dar seems like any other farm hand, except he has the ability to communicate telepathically with animals. He keeps this talent to himself, along with his sacred birthmark, which looks like a pair of pants carved into the palm of his hand.

Then one day the nasty tribe of Jun--headed by mad Maax--swoop down on Dar's peaceful village and slaughter everybody just for the heck of it. Don't you hate that? Dar is spared, however, by the quick thinking of his pet pooch. When he comes to from a conk on the noggin, Dar sees that his village is razed, his family is toast and his dog is a stiff. With nothing left to lose, Dar decides it is now time to embrace his destiny as the Beastmaster...by donning a fringed jock strap, a disco head-band and vowing to avenge his loved ones.

Every super-hero needs a support system (after all, even Bat Man had Robin, Alfred the butler and Commissioner Gordon), so Dar goes about collecting his: Sharak, an eagle, Ruh, a "black tiger", and the ferrets Kodo and Podo. These critters represent sight, strength, cunning and provide the best acting in the flick. 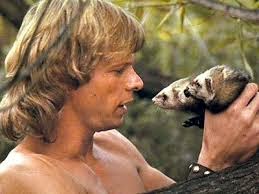 "Remember, I'm the star of the show!" Marc Singer warns his ferret co-stars to stop stealing the movie.

While tramping around, Dar spies Kiri (former "Charlie's Angel" Tanya Roberts) skinny dipping in a lake. In order to arrange a meeting, Dar has his ferrets steal her cover-ups. Then he directs Ruh to "scare" her, so he can rush in to "save her" and thus get some nooky as a reward. Ruh, however, refuses to be part of this ungentlemanly scheme. Kiri, as it turns out, is a "temple slave" and doesn't have time for Dar's horny antics. Learning this info, Dar encourages Kiri to ditch her cruel masters and join up with him. "I will protect you!" Singer vows--now, I'm sure Dar means that sincerely, but I also suspect nature boy wouldn't be above trying to coax Kiri into some tonsil boxing along the way, too. You know, just to break up the monotony. Unfortunately, poor Kiri must return to slaving at the temple "or my whole family will be killed."

"You best forget all about me," she sobs before running away.

While still tramping around, Dar comes to a village/mico-kingdom that is under the evil thumb of Maax. He insists the hapless citizens sacrifice their kids to his fire god. This means viewers are forced to watch hysterical, screaming tots thrown alive into a fiery pit, which is much, much more disturbing than those previously mentioned Bat People sucking their victims' brains out like they were some kind of a fruit smoothie. Have no fear, though: Dar commands Sharak to save one poor blonde toddler in the nick of time and even returns the kid to his/her grateful parents. 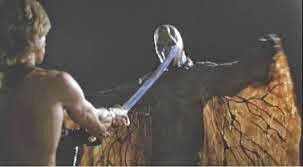 Now, as if all of this wasn't diverting enough, Dar meets up with a traveling "pilgrim" named Seth (John Amos) and his tween charge Tal (Josh Milrad). As it turns out, Tal is the second son of King Zed, which makes him Dar's kid-brother. Seth and Tal hope to raise an army to defeat Maax, who has imprisoned Zed and poked his eyes out. Dar agrees to help the duo and is delighted to learn that Kiri is Tal's cousin.

First, though, they have to save Kiri, who is scheduled for execution with a few other temple slaves. This is accomplished by Seth, Tal and Dar donning burlap sack robes and peddling a raft that arrives at just the precise moment Kiri and the other slave girls are being marched to their deaths. When the guys ambush the baddies, plucky Kiri kicks one of the evil priests in the crotch and tosses three more into the drink, proving she's no weak sister herself. Later, Tal and Seth worry that Dar might change his mind about helping free King Zed (remember, Dar doesn't know that Zed is his real dad). Just then, Kiri saunters over to Singer, gives him a peek at her cleavage and plants a big, tongue baring smooch on him-- ensuring that the Beastmaster will indeed stick around. 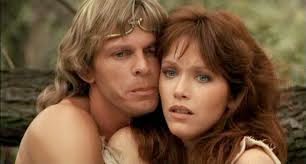 All of this, of course, is leading up to the flick's final confrontation scene, where the forces of good battle the forces of evil and Dar learns he is King Zed's eldest son. Before that happens, Dar and company must sneak into Maax's castle and free King Zed, helped along by frisky ferrets Kodo and Podo, who have stolen Maax's master keys. In one of "The Beastmaster"s best sequences, Kodo and Podo are chased by one of Maax's "Death Guards". In case you are wondering what a "Death Guard" is, listen up. A Death Guard is a poor sap Maax's evil priests have subjected to "extreme torture" which turns them into "wild beasts". Their bodies are then encased in "deadly armour", which is basically leather separates studded with spikes. Then the priests "drain (their) blood" and "damage (their) brain with a mysterious green liquid." The end result is an invincible warrior that will "kill anything it meets"--although nobody explains how the poor suckers stay alive after all their blood has been drained away.

Anyway, this type of a hulk is no match for our furry heroes. As Kodo and Podo bob and weave and dart into tiny passage ways, an increasingly angry Death Guard gives chase and tries and fails to smash them to a pulp. Just when you think the little critters are ferret fricassee, they make a daring leap from a high parapet onto a passing hay wagon, which is carrying Dar and company to safety.

Ferret action sequences! Where else but in Junk Cinema will you see that?! 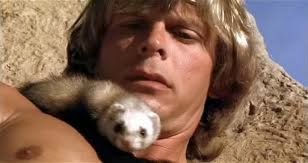 Alas, King Zed might have been saved, but he's consumed with revenge against Maax. He wants his few loyal followers to rise up and kill the baddie and his priests. Dar objects to this plan, because 1) the king's loyal followers amount to about 15 people and 2) they would need an army to defeat Maax, which they don't have and 3) an elderly king with no peepers might not be the best person to lead a rag-tag group into battle. Even worse, when King Zed is formally introduced to Dar, he rejects him as "a freak", which causes Singer and his beasties to run away to find a safe place to cry.

You can bet your sweet bippy, though, that Dar will ultimately join the climatic fight to kill Maax--as do the Bat People, who swoop down just in time to suck the brains out of the evil Juns--who were in cahoots with mad Maax--and make the world safe from over-the-top Method actors like Rip Torn.

When we last see Dar, he is staring off into space, his trusty eagle, tiger and ferrets by his side. Also sidling up to Dar is Kiri. As the music swells, it's clear the Beastmaster legend has only begun, and our hero and his furry friends will be off to new adventures, like "The Beastmaster: Through The Portal Of Time" and the syndicated "Beastmaster" TV series.

A flick like "The Beastmaster" is the kind of happy accident that can only happen in Junk Cinema. Where else will you find a hero whose surrogate mother is a cow, brain-sucking Bat People that worship eagles and the dad from "Good Times" prancing around in a thong? 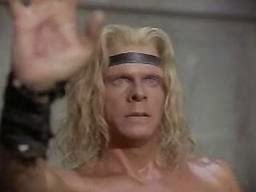 Note to self: Get a better perm. Marc Singer in "Beastmaster: Through The Portal Of Time".

Then there is Rip Torn, husband of the late Geraldine Page, a highly respected stage and film actor, cavorting around with a fake nose, vertical eyebrows and a caftan he must have pinched from the set of "Maude". What is he doing here? Was he broke? Was somebody blackmailing him? His presence as the evil mad Maax adds to the surreal insanity surrounding the flick, and, really, after watching Torn chew the scenery, I can't picture anyone else in the part. Add in Tanya Roberts--who would later win Razzie fame for her performance in the box office bomb "Sheena"--and Marc Singer in his greatest role after the TV series "V" and you have a can't-miss-laugh-till-you-ache classic.

To the cast of "The Beastmaster": Junk Cinema salutes you!