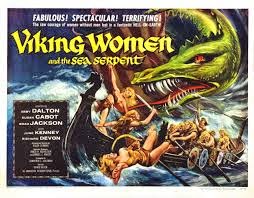 Fearless Viking women battle a ferocious sea critter in the poster for Roger Corman's 1957 feminist epic "The Viking Women and the Sea Serpent."

Today's film is a historical saga that takes place long, long ago in ancient Scandinavia. It features proud Viking warriors, their proud Viking women and chronicles their proud Viking determination to survive the made-in-10-days Roger Corman adventure classic "The Viking Women and the Sea Serpent"(1957).

"In the days when the world was young and the gods had not abandoned the race of men" our narrator intones, a group of proud Viking warriors from the village of Stannjold realized "their own rocky shores and forbidden mountains could no longer yield them a livelihood". Thus, the guys "bade farewell to their women and ventured fearlessly into the unknown." Time dragged on and the men had yet to return. This means A) the men have died or B) they have gotten hopelessly lost because they refused to stop and ask for directions. Therefore, it's up to the proud Viking women of Stannjold to take control of the situation.

The proudest of the Viking women is Desir (Abby Dalton, future cast member of "Falcon Crest"). Actually, Desir is both proud and democratic, because she allows her fellow Vikettes to vote if they should venture out to find the guys or just sit home and continue to wait. This they do by throwing spears at either the "yes" tree or the "no" tree. 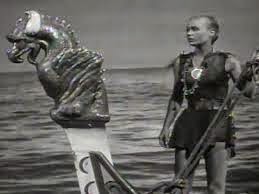 Which is more life like? Future "Falcon Crest" star Abby Dalton or the gargoyle figurehead?

Two important votes swing things for Desir. The first is Thyra, who has no missing husband, but figures she won't get one if the situation doesn't improve. The other is "Enger the Dark" (the surly Susan Cabot). She's the brunette outcast among her (bleached) blond sisters. However, her motivation is less than honorable: the whole village knows Enger wants Desir's man, Vedric. Perhaps during their voyage to find the men, Desir could fall victim to an accident and perhaps Vedric would consider coming over to the dark side?

Summing up the general feeling about Enger, one Vikette declares, "She gives me the creeps."

And so the proud Viking women set sail to rescue their proud Viking men. Stealing away on their ship is Ottar (Corman regular Jonathan Haze), a rather shrimpy fellow with permed and bleached blond locks. Ottar was suppose to stay behind, but he insisted on coming to "protect the women." In the course of the flick, Ottar and gigantress Thyra will fall in love, proving yet again that size doesn't matter.

While paddling about, the proud Viking women hit a rough patch of water known as "the swirling vortex." This being a Roger Corman picture, "the swirling vortex" actually resembles a close-up of a flushing toilet bowl. Then the sea monster of the film's title shows up. This being a Roger Corman movie, the sea monster is actually pretty nifty: we get a close-up of his big, bug eyes, sharp teeth and long, pointy tail. He's pretty menacing and a better actor than most of the cast. Congrats to Roger for taking the time to include some decent F/X in his flick! 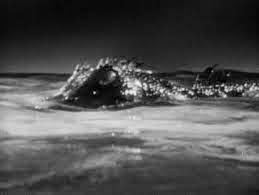 As special effects in Roger Corman movies go, this titled sea serpent is one of the best.

Despite the best efforts of the proud Viking women, the title critter totals their boat and sends the gals crashing into the drink.

Moments later, the survivors wash up on a beach (without a hair out of place). They are then promptly captured by the whip-cracking tribe of Grimolt, who's leader, Stark (Richard Devon) looks like Don Draper from "Mad Men"--if Dan Draper wore a fuzzy vest and a hat with a spike on top of it.

As it turns out, these Grimolts have enslaved the proud Viking women's proud Viking men; they have been forcing them to dig, mine and build stuff--without proper credit or compensation, mind you. The rest of the time the proud Vikings are chained up in a cave.

The proud Viking couples are thrilled to be reunited, but the mean Grimolts won't be allowing any conjugal visits. See, the Grimlots want the proud Viking women to mate with them--and could care less that their recent arrivals have other ideas.

"We will never submit to savages!" Desir flares. 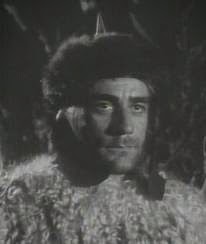 Meanwhile, the Grimolts are so eager to show the Viking gals what hot dates they are, they invite them to go on a boar hunt. It's during this show of manly daring-do the Grimolt crown prince Senya (Jay Sayer) falls off his horse, scrapes his elbows and shrieks like a dental drill when the boar grunts at him. Riding up spear in hand is Desir, who nails the pig with one swift throw.

"A GIRL!" the wimpy royal cries--I mean, he literally breaks down and cries.

"What's so wrong about a girl being a good hunter?!" demands Desir.

"But you don't understand!" Senya bleats. "I am a prince!" 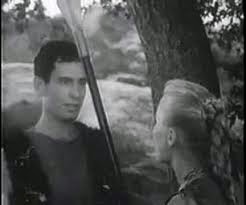 So to save his face and precious ego, Desir allows Senya to claim he speared the porker. This clearly pleases dad Stark, who proclaims his whiny, wimpy son "a mighty hunter!" and throws a wild bash in his honor.

The proud Viking women are still trying to find a way to escape with their men. Unbeknownst to them, surly, scheming Enger has cut a deal with Stark. In return for spying on her Viking sisters (and agreeing to have sex with Stark at a later date), Enger will be allowed to escape with Vedric.

However, proud Viking leader Vedric won't leave his fellow warriors behind or renounce his true love for Desir when Enger informs him of the secret deal she has struck. This causes Enger to stomp off in a huff--and for meanie Stark to make an example of Vedric and Desir by burning them at the stake.

Because time is running out, Corman picks up the pace considerably. First, Desir and Vedric are tied to his-and-her stakes--and they vow to die together. Next, Enger, realizing what a sap's she's been, prays to the god Thor to help the couple. Thor replies by bringing rain, which douses the fires, and lightening, which strikes and kills Senya. Lead by Ottar, the Viking men and women then pummel their Grimolt captors and make a run for it. In a final bit of self sacrifice, Enger allows the Grimolt dogs to tear her apart, allowing the Vikings time to hop into some conveniently available canoes (which just happened to be waiting on the beach) and paddle away.

When we next see our proud Viking protagonists, they have eluded recapture, killed off the sea serpent and safely returned to Stannjold. No doubt their fellow villagers will toss these proud Viking couples a super group wedding. Raggmunk (potato pancakes served with fried pork and loganberries) and glogg (hot mulled wine) for everybody! Let's party like it's 1099! 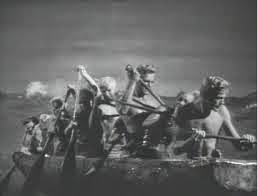 "Keeping paddling! The end of the movie is almost in sight!"

Since "The Viking Women and the Sea Serpent" is produced and directed by Roger Corman--one of the greats of Junk Cinema--you can safely assume that our feature presentation was made on a shoe-string budget ($65,000), shot on an impossibly brief schedule (10 days), spotlights some hilarious acting (Abby Dalton became the flick's leading lady because the actress first hired to play Desir got sick) and was plastered on drive-in screens with an equally nutty co-feature ("The Astounding She-Monster", to be exact).

Yet, "The Viking Women and the Sea Serpent" is one of Corman's better efforts.

The title critter is decent F/X and probably blew the budget, but it's very effective.

Susan Cabot was a regular Corman bad girl, having played a sociopath co-ed in "Sorority Girl" and a cosmetics mogul in "Wasp Woman". Her character Enger the Dark is an outcast who schemes for another gal's man, yet Cabot manages to make her interesting. The other stand out in the cast is Jay Sayer as Prince Senya. Yes, he's a whiny little creep/crybaby and Sayer brings a camp element to the character. However, the role was originally conceived to be a nerdy teenager. Corman probably figured a real teenager would be either too expensive to supervise or too much of a hassle to have around. Thus we have 20-something Sayer mincing about, but it's memorable mincing.

Finally, it's refreshing to see females in a 1950's film being strong and capable, as opposed to just shopping for husbands. In fact, Junk Cinema has a long tradition of strong female roles: Beverly Garland's savvy sheriff in "Gunslinger"; the independent ladies of "The Wild Women of Wongo"; spunky reporter Audrey Ames in "The Beginning of the End"; and the understanding Delores Fuller in "Glen or Glenda?", to name but a few. This little known fact is another reason to love Junk Cinema.

Therefore, despite impossible odds, Roger Corman hits another one out of the ball park!

Roger Corman: we who love Junk Cinema salute you! Skoal! 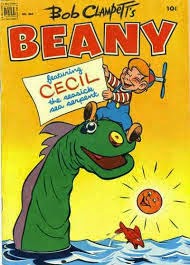