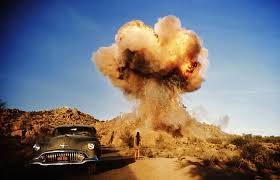 "It's the bomb!" Antonioni's "Zabriskie Point" blows up in more ways than one.

What major American motion picture was directed by a European "art house" great, produced by Sophia Loren's husband, co-scripted by Jessica Lange's ex-cuddlemate AND starred one of Dennis Hopper's ex-wives?

Now, before I launch into a critical analysis that explains why "Zabriskie Point" qualifies as a Junk Cinema Jewel (with sprightly humor and bits o'trivia to lighten up your day!) it should be mentioned that Antonioni deliberately cast Frechette and Halprin as his leads even though they had no acting experience (or talent) between them. In fact, Rod Taylor (as a capitalistic, money grubbing pig on the make) is the only professional actor in the cast.

Therefore, if you begin to notice what a couple of stiffs Frechette and Halprin, well, now you know why.

With that important bit of info out of the way, let's jump into the movie, and, remember, you have been warned.

"Zabriskie Point" begins at a protest planning meeting, where young radicals say stuff like, "I don't have to justify my revolutionary credentials to you!"  and so forth. While the kids bicker back and forth about tactics, one sexy rebel (Frechette) stands up and declares he's ready "to die for his cause."

"Have I reached the party to whom I am speaking?" Capitalist pig Rod Taylor tries to contact hippie crush Daria.

"No, of boredom," he sneers and stomps off

This is Mark, our anti-hero hero. He's cool and sexy, if  a bit self-satisfied. He's no actor, but that's what Antonioni wanted.

In another part of the movie, we meet Daria (Halprin), a free-love endorsing hippie chick who works as a secretary "only when I need the bread." She's trying to get back a book she left on the roof of the building she works at. The snippy security guard is giving her a hard time, wondering why she was on the roof in the first place and not eating "lunch in the lunch room like everybody else." That's when capitalist pig Rod Taylor arrives. He's the Big Boss and he offers to help Daria get her book back--although it's clear his interest in her isn't literary.

The movie then switches to a library where the police are ordering some occupying radicals to come out with their hands up. Mark is hovering around near by. The police shoot one of the radicals (even though they are unarmed) and seconds later a cop is shot dead. Did Mark do it? The movie is deliberately unclear on that point. However, because Mark was lurking about the protest and he was packing heat and he was seen fleeing the scene of the crime, the police (and the media) decide Mark is guilty.

Deciding that he "needs to get off the ground", Mark strolls over to the local airport. Just like the nerdy tween Davy in "San Francisco International", Mark hops into a plane and takes off like a seasoned jet jockey. Unlike the nerdy tween Davy, however, Mark is skilled and confident enough as a pilot to repeatedly buzz the car Daria is driving in.

Daria, you see, is driving to Phoenix for a business meeting with Rod--or perhaps for something a bit more personal.  Mark and Daria finally meet at a lonely highway siding where Mark has befriended an old hermit (don't ask). Daria agrees to drive Mark to the nearest gas station and along the way they stop at Zabriske Point.

Thus we come to the most crucial part of the flick. Surveying the vast, open, dry, dusty and rocky landscape before them, our two leads wax Existential about everything...and nothing.

Daria: "Don't you feel at home here? It's so peaceful."

Mark: "You know you're talking to a guy under discipline."

Mark: "This group I was in had rules against smoking. They were into a reality trip." 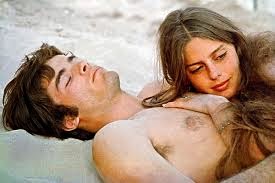 "Was it good for you, too?" Mark and Daria in the milky after-glow.

Mark: "You're pretty tolerant about a guy who doesn't turn on."

Daria: "There's a thousand sides to everything, not just heroes and villains. So anyway, so anyway...'So anyway' ought to be one word. Like a place or a river. 'So Anyway River'!"

Once Daria and Mark exhaust themselves with this disjointed small talk, they decide to have sex. While our leads roll around in the dust tonguing each other, out of nowhere appear dozens of other hippie couples. They kiss, snuggle, roll around and do the nasty. In one impressive shot, Zabriskie Point is dotted with couples gettin' busy. When Mark and Daria are through, the other couples disappear. Still in the milky after-glow, Mark mumbles, "I always knew it would be like this."

After their dusty douse of afternoon delight, Mark tells he's returning the plane. Daria warns that could be a risky movie, to which Mark declares, "I need to take risks!" So be it. However, before Mark flies back to the airport, he, Daria and the old hermit repaint the plane hippie-style. They add on breasts, slogans like "Bucks Suck" and "No Words", eyes and a smile, the typical cheeky protest stuff.

Mark, Daria and the old hermit give their plane a hippie make-over.

"It's nice to see a young person with respect for authority," the old hermit says.

Unfortunately, the police, the airport personnel, the media and the real owner of the plane disagree. Although Mark lands the plane with aplomb and is unarmed, he is shot and killed.

In the words of Daria, "What a drag!"

Now at the Phoenix home of Rod Taylor, surrounded by hypocritical squares, Daria is filled with rage--for the loss of Mark, for the senselessness of his death, for The Man, for all those Establishment fat cats who put profit before people...all the usual suspects of post-'60's America.

So what does Daria do?

She visualizes a string of symbols that represent The Establishment and All She's Against and blows them up to kingdom come.

Do these symbols include, say, the Pentagon, Wall Street, the IRS, the Watergate building or the draft board perhaps?

"Take that, KFC!" One of Daria's more memorable visions in "Zabriskie Point".

Nah. Instead of those symbols of  American hypocrisy/decline/repression, Daria takes her vengeance out on (among other things) patio furniture, a clothes rack, a TV set, a loaf of Wonder Bread, books, magazines and a raw chicken.

It is on that note that "Zabriskie Point" ends its broadcast day.

So, you may be asking, what was the point of this film?

Far more famous and learned critics than myself have been debating that since 1970, when "Zabriskie Point" was unleashed and landed with a big thud in movie theaters, despite a lot of pre-release publicity and leads Daria and Mark landing on the covers of Look and Rollingstone magazine, respectively.

However, it's also an excellent example that Junk Cinema can be made by anybody, even a famous, respected European director! 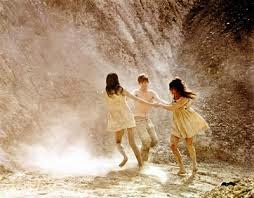 "Hooray! The movie is over!"

It's wrong to think Junk Cinema can only be made by non-Hollywood hacks who have no money and no talent. Antonioni was not a hack, MGM gave him buckets of money to make this flick, he had total artistic control and he had plenty of talent. But he bungled to job anyway. Give any director enough rope and they can hang themselves, artistically speaking.

Junk Cinema can happen anywhere at anytime--isn't that neat?