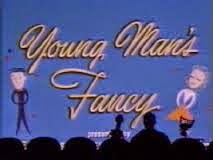 Looking for romance advice? The Jam Handy Organization is here to help. (Yes, this short was given the once-over by MST3K, hence the iconic silhouettes.)

Say, if you don't mind, I'd like to indulge in a little "girl talk".

Ladies! Have you met the man of your dreams, but are having trouble attracting his attention? Do you feel at a loss as to how to seal the deal? Are Mr. Perfect's obscure hobbies and eccentric career goals putting a damper on your amour?

Suffer no more! Junk Cinema once again has the solution for your problem! If your dream boat seems to have sprung a leak, please watch "A Young Man's Fancy", an "industrial short" from 1952 produced by the Jam Handy Organization. Only by doing so will you learn the secret to securing a (somewhat) reluctant swain: electronic cooking devices!

Let me set the stage: 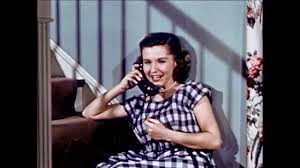 Judy: "I feel all squishy inside!"

The Heroine: Judy Adams (Bonnie Baken), your typical '50's bobby socks-er who goes "all squishy inside!" when she meets Alexander Phipps.

Author's note: Judy is a bit of an airhead and appears to go for anything in pants, so how deep her love for Alex is is really questionable. 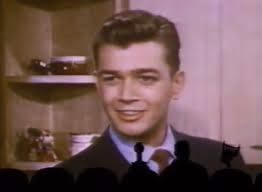 Alexander Phipps: "Is that a mushroom in your pocket or are you just happy to see me?"

The Conflict: Believing Alex to be a nerd like her brother Bob, Judy initially could care less about their future house guest. Then she meets Alex and goes "all squishy inside", declaring the fellow  "totally frantic" and "a real Jonah".

But how to catch his eye? Judy changes from jeans into a dress, serves Alex a lunch of stew and "hot biscuits" and even invites him to a swimming party. No dice. All Alex wants to do is talk about is hydraulics, time saving devices and the money making potential of mushrooms. 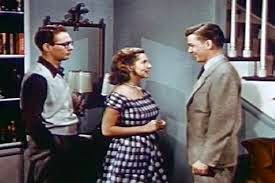 Are you woman enough to take this man? Judy zeroes in on the clueless Alex.

The Set-Up: Mrs. Adams announces she's attending a garden club function and will be gone all evening. When brother Bob wails, "What about dinner?!", Mrs. Adams says Judy will fix it.

Author's note: It being 1952, it never occurs to Bob to hustle his hinder into the kitchen to make his own damn dinner. 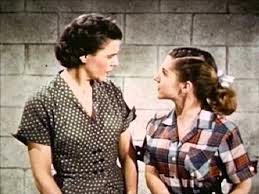 Partners in Crime: Judy and her mom plot behind Alex's back.

Baiting the Hook: To get Alex to stop yammering about mushrooms, Judy plays the helpless-female-card and claims the electric mixer won't work.

Alex plugs in the mixer, to Judy's breathless delight. He then launches into a monologue about time saving devices, describing how the modern kitchen is strategically arranged to ensure housewives won't exhaust themselves moving between the freezer to the fridge to the oven to the sink to the dishwasher to the table. Judy reacts to all of this as if it were the most enthralling, exciting news she's ever heard. It isn't, of course, but who cares! Judy has finally got her fish on the line and is ready to start reeling the poor sap in. 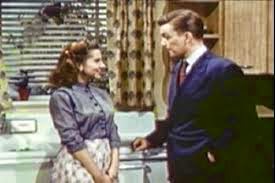 Judy lures Alex into her web of domestic intrigue.

The Main Event: Judy serves Alex, Bob and her father a multi-course meal on bone china. They start with chilled pineapple juice, move on to a pork roast and end things up with cherry pie topped with whipped cream. Judy is in a dress; Alex and Mr. Adams wear suits and ties; Bob gets by with an open-necked shirt and a vest. Just as Mrs. Adams predicted, Alex is blown away by Judy's dinner, which she modestly credits to her family's electric kitchen, which "does practically everything but talk!"

Never the less, Alex is soooooooo impressed with Judy's culinary skills that he decides to ditch his mushroom lecture and take Judy dancing instead. 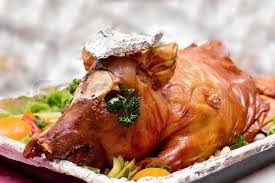 The pork roast Judy whipped up for Alex.

The Conclusion: Mrs. Adams, decked out in a fanciful beret, returns home to find Mr. Adams loading the dishwasher. He informs his wife that the dinner went great and Judy and Alex are out cutting a rug somewhere. Then he pulls out the tickets for Alex's mushroom lecture and suggests they go. Mrs. Adams, who has her heart set on an electric dryer, says no way. Hubby and wife share a laugh and our feature presentation ends on this happy note.

A couple of interesting tidbits about "A Young Man's Fancy":

1) When Bob and Alex first arrive at the Adams home, Bob announces that he and Alex plan to take a shower. But not together! Get your mind out of the gutter! With the Adams' new electric hot water heater, there is enough hot water for everybody!

2) When Bob sees his sister Judy, he announces "And here's the twin without the Toni Perm!"

Believe it or not, in 1952, that comment was a very hip social reference.

See, Toni Home Permanents had just arrived on the market. To prove how great their product was, the Toni people created an ad campaign that featured twins, one with a Toni Perm and one with a beauty parlor perm. Which was which? They never said.

To hammer their message home even harder, the Toni Home Permanents people created a TV show called "Toni Twin Time" in 1950. Hosted by Jack Lemmon (!), it was a talent show where one twin had a Toni Perm and the other didn't. 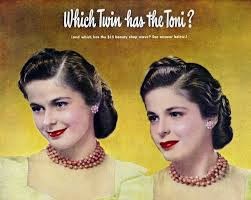 Did she or didn't she? A vintage ad for Toni Home Perms

When appraising a cinematic specimen as nutty as "A Young Man's Fancy", one must be mindful of certain cultural and artistic realities.

Second, the actors in this short, while clean-cut examples of the middle class patrons Jam Handy wanted to reach, are about as charismatic as crash test dummies.

Third, Judy, our female protagonist, is an unappealing character, to say the least. She's dippy, boy-crazy, manipulative and has all the emotional depth of your average Kardashian. If she indeed marries Alex, I bet in ten years Judy will be hitting the cooking Sherry big time in order to cope with her mushroom obsessed husband, their passel of square-headed brats and the suburban hell she willingly created for herself. 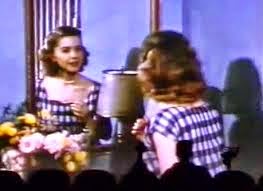 "Mirror, mirror, on the wall..." Judy freshens up before moving in for the kill.

Fourth, Alex is a sexless, personality-free dope if there ever was one. There is no reason why Judy or any woman would go "all squishy inside" over him. Perhaps the filmmakers wanted to subtly suggest it was the female's duty to draw the preoccupied male out of himself and into the wonders of domestic bliss. However, considering that Alex is as stolid as one of his precious mushrooms, even doing the Dance of the Seven Veils in broad daylight probably wouldn't arouse him.

Fifth and finally, "A Young Man's Fancy" posits that electrical appliances, along with empty flattery and emotional manipulation, are the best ways to hook a man--a queasy assertion even for 1952. It's surprising that the producers forgot to mention getting pregnant, dad loading up the shot-gun and magically fitting into a glass slipper as other tried-and-true matrimonial options. But they were hoping to sell electrical appliances, so they bypassed those.

So, all you love-starved single gals hoping to hook a mate, watch "A Young Man's Fancy" and start rattling those pots and pans!

Until next time, SAVE THE MOVIES!