"The Violent Years": Girls Gone Wild With A Little Help From Ed Wood 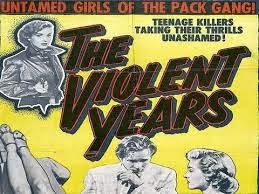 "Parents, do you know where your daughters are?" A poster for the Ed Wood-scripted but William Morgan-directed "The Violent Years".

I want to introduce you to Paula Parkins. Paula (Jean Moorhead) is the most privileged bobby socks-er on the planet. Her indulgent parents have given Paula everything she's ever wanted--except, of course, their time and attention. As well as boundaries, discipline, chores and a good dollop of religion, come to think of it.

So is it any wonder, then, that sweet little Paula becomes the head of a gun totin', tobacco puffin', booze chuggin' girl gang?

"The Violent Years" (1956) may have been directed by William Morgan, but it's an Ed Wood movie through and through. You can feel The Master of Disaster's presence in every frame of the film, from its cheap sets to its stiff as starch actors to its heavy handed moralizing to its incredibly daffy dialogue.

Clearly, "The Violent Years" wanted to be another "Rebel Without A Cause" or "Blackboard Jungle", but under the combined touch of Ed Wood and William Morgan this tale of "Untamed Girls Of The Pack Gang!" who take "Their Thrills Unashamed!" ended up becoming the goofiest "message" flick this side of Juvie Hall. 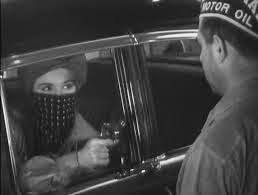 Paula looks like an angel, but she's the devil in disguise. Along with her fellow bad seeds Georgia, Geraldine and Phyllis, she has master minded a string of 17 (!) gas station robberies. They also fence stolen goods for a small time crook named Shelia (Lee Constant).

"It's the thrill that gets me! The thrill of the chase!" Paula declares.

Naturally, Paula's utterly clueless parents suspect nothing is amiss. But how would they know? Ma (Barbara Weeks) is a country club gad-about and pa (Art Millan) is obsessed with publishing his newspaper. In fact, on Paula's 18th birthday, pops is so busy that he has his star reporter Barney (Glenn Corbet) deliver his kid's gift! (Mom, meanwhile, is at a charity bazaar.)

Her father's newspaper connection does give Paula the inside track on how the police are progressing on tracking her gang. (The verdict: not well.) When she learns that under cover cops will be posted at all gas stations from now on, Paula realizes they need a new game plan. That's when the gals take to sticking up couples in Lovers Lane. This leads to "The Violent Years" most notorious scene--a scene only Ed Wood could dream up. 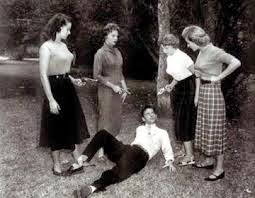 The gals pounce on an unsuspecting couple necking in a convertible. At gun point they force the girl to strip to her skivvies. Then they rip her skirt into strips and tie her up. That done, they turn their attention to the male half of the duo.

The girls take his watch, his ring and his money (eleven dollars). Then they drag him off to a secluded spot. Paula gives him an evil smirk, yanks off her sweater and strides purposefully over to their captive...

Of course, viewers never see Paula and her pals assault the poor fellow, but that is clearly what transpired. Meanwhile, the victim's date has freed herself and runs off screaming for help.

When we next catch up with Paula, she's throwing a "pajama party." With typical cluelessness, Paula's ma thinks her daughter's party is an innocent little frolic "where the girls talk and play games in their pajamas." Ha! Instead of playing Twister or Charades, the gals listen to rock 'n roll, belt back booze, smoke and make out with JD's in their pajamas! Always ahead of the curve, Paula slinks around in a shiny, strapless jumpsuit and tongues an older man in a sport coat named Manny. When star reporter Barney arrives to give Paula her father's present, her "date" threatens to rearrange his face. Barney blasts him into the middle of next week (actually, the couch). He then warns Paula about the rough company she's keeping--but doesn't even think to tell her father! 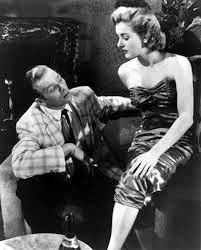 Not the type of boy to bring home to mother: Paula and Manny.

It probably wouldn't make any difference. Paula and her pals think they are invincible. Thus the girls jump at the chance to accept a more lucrative assignment from Shelia: trashing a classroom at their high school and desecrating the flag. See, Shelia's "clients" are "foreigners" (Commies) who have a strong anti-American bent. Butch Phyllis is mad at her math teacher, so that's the room they hit.

As the girls knock over chairs, mess up the teacher's desk, erase her lesson plans from the blackboard(!) and toss a globe out the window, the cops arrive. Gun play ensues; Phyllis cackles, "Look at 'em jump! Just like rabbits!" Then she's shot. "This ain't the way it's suppose to be..." Phyllis whispers before keeling over. The remaining girls make a run for their car; as they do, another one bites the dust. That leaves just Paula and Geraldine. They head over to Shelia's place to hide out. However, when their fence learns that the job has been botched and a cop has been killed, Shelia decides to call the police. Paula plugs her full of lead before she can.

Dressed up in Shelia's duds, the girls try to sneak out of town, but they are spotted by the cops. A high speed chase unfolds and Paula dives into a store's plate glass window. Is this the end? No. Paula survives (with out a scratch on her) only to wake up in the hospital ward of Juvie Hall--pregnant!

Is this the end? No way! Paula must stand trial for her crimes. She's remanded to Juvie Hall until she's 21 and then Paula will be transferred to The Big House, Ladies Division, for the rest of her life.

OK, justice is served, so is that  the end? 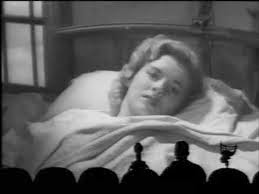 Pregnant Paula ponders her fate. The anti-heroine's final thoughts? "So what!"

Of course not! Paula has to give birth, remember. In due time the junior jail bird delivers a baby girl, but promptly dies. That's the end, right?

You see, Paula's parents want custody of their grandchild. Being the tot's next of kin, you'd think they'd be a shoo-ins. Not so fast. Presiding Judge Clara eventually deliver his verdict, which he does in a long, slow, disjointed, rambling, tour de farce that will leave you scratching your head and/or screaming for him to get to the point. First, he hammers the Parkins' for their simultaneous neglect and indulgence of their daughter. Next, the judge laments the lack of parental control and the permissiveness of (1956) society. Then he sounds off on the "back to God movement" and his hope that "the world's religions" might help reign in society's trouble makers. Just when you are about to scream, "Will you cut to the chase?! We're burnin' daylight here!" Judge Clara tells the stunned Parkins that, no, they will not get custody of their granddaughter. She will remain "a ward of the state" until a "suitable" family adopts her.

NOW "The Violent Years" ends, with the Parkins' heads bowed in shame. 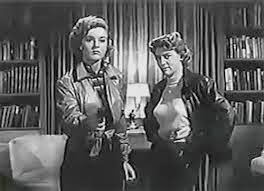 They say the road to ruin is paved with good intentions, which also sums up Ed Wood's entire career.

Obviously, in his own blinkered way, Ed Wood wanted to sound off on neglectful parents and the dangers of letting young people run wild. He just didn't know how. Or, rather, Ed didn't know how to fashion a script that would convincingly parlay that message. I don't know why Wood didn't direct this flick himself, but William Morgan was the perfect stand-in. In other words, Morgan's directing skills were as inept as Wood's. In fact, he even managed to committed several cinematic faux pas that would make Wood proud. To wit:

*When Paula's gang arrives at the high school to trash it, it's night. When they drive past the cops, it's day.

*Everyone in the courtroom scenes wear the same outfits, even though the hearings supposedly take place on different days. The curtain behind the judge appears to be a shower curtain.

*Although Paula shoots Shelia in the gut, her victim never bleeds and the bullet doesn't leave a mark on her sweater.

*The footage of Paula's car driving down a stretch of road and making a right turn is used twice.

*All the girls wear angora sweaters, an Ed Wood favorite. 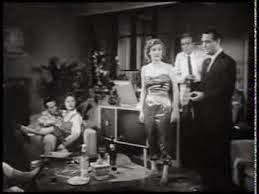 When parents are away, the teenagers will play: Paula entertains at home.

However, Ed Wood's own inimitable Junk Cinema genius shines through best in "The Violent Years" daffy dialogue, which includes some real pearls of Wood Wisdom.

For example, when Paula asks her mom if they can chat for a minute, Mrs. Parkins replies, "Good gracious, no! Besides, what can be so important in your young life as to warrant my attention so drastically?"

Later, when Paula and her pack ambush the couple in Lovers Lane, this transpires:

Mean Girl: "Stop asking questions and you may get some answers! 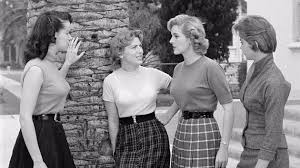 Paula's plaid posse.
This racy exchange occurs when Paula and her gang are deciding what to do with their male captive:

Mean Girl: "Maybe he's got more to offer than his money."

Other Mean Girl: "Yeah, under conventional circumstances he could be interesting."

Paula: "Why wait for conventional circumstances?"

After Paula has died, her mom laments that she and her hubby gave their daughter "everything but love". Specifically "a new dress instead of a caress." 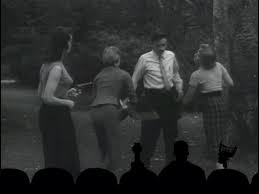 The girls decide to throw "conventional circumstances" out the window with their male victim.

Best of all is the policeman discussing JDs: "These aren't teenagers! These are morons!"

Only in the wonderful, funderful world of Junk Cinema could a hard-drinking cross dresser with a thing for angora (and female bondage scenes) pen a script that champions a return to family values. In 1956, mind you.

Until next time, hug your kids, and SAVE THE MOVIES!