Do You Have "The Sinister Urge"? 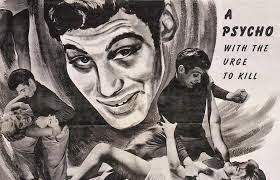 Dino Fantini is Dirk the "psycho with the urge to kill" in Ed Wood's "The Sinister Urge".

When last we met, the topic explored was out of control teenagers and their clueless parents via Ed Wood's "The Violent Years."

Today, we shift our focus to the dangers of the smut picture racket via another Ed Wood gem, "The Sinister Urge" (1959/60).

Written and directed by Wood, "The Sinister Urge" is a series of inter-connected stories all linked by (you guessed it!) the horrors of the exploding smut picture racket. Before we delve into the plot (which is pretty straight forward by Ed Wood standards) let's meet the players: 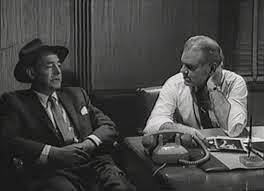 Mary (Jeanne Willardson): She's an innocent actress from the sticks who is "discovered" by Johnny and realizes too late that she's signed up with a smut producer.

Dirk (Dino Fantini): He's the "muscle" of Gloria's operation. Sporting an impossibly high hair-do, Dirk is also deeply attached to his pet knife, which he uses to cut up smut models. Gloria knows Dirk is off his dot, but keeps him around because "he's useful." 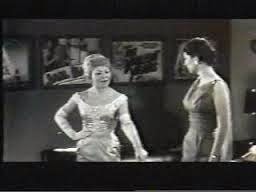 Gloria (Jean Fontaine) tells innocent Mary (Jeanne Willardson) she's employed in the smut racket--and there's nothing she can do about it!

Now that you know who's who, let's settle in for the plot.

An unidentified blond (dressed in a slip and high heels) runs down a dirt road. She spies a phone booth and frantically screams, "Operator! Operator!" Next we cut to the plywood office of Lt. Matt Carson (Kenne Duncan). It's he, along with Sgt. Randy Stone (Duke Moore), who take the victim's call and rush out to help. Alas, they are too late; the gal has become the latest victim of the crazed killer the duo have been tracking.

"But with one difference," the more experienced Carson points out. "Her name is different."

Gloria gives a piece of her mind (but not too big a piece) to Johnny.

As I mentioned earlier, Gloria is the Martha Stewart of Smut. She runs her booming business from the comfort of her suburban home--and never in the same outfit twice. Gloria favors tight slacks, short-shorts, high heels and frilly prom dresses, accessorized by opera gloves and a rhinestone tiara. However, her most memorable feature is her voice: rough and gruff, it is the oral equivalent of a sandblaster. Whether she is barking orders ("And brother I mean hot!"), cracking wise ("Close the door; you're letting the flies out!") or just answering the phone, Gloria's raspy bark scorches everyone in sight.

From the profane we move to the innocent. Mary (Jeanne Wiilardson) is a young actress from the sticks who longs to be a star. Johnny spots her in the park and convinces her he is a real movie producer. Visiting his office, Mary notices the framed copies of Ed Wood movie posters on the wall--which should have been a clue that things weren't on the up and up. "Are gangster and horror pictures all you do?" she inquires. Reeling her in, Johnny puts Mary "under contract" and gives her money to buy new clothes and move into a better apartment. He also urges her to be "seen at all the right places." All this is fine with Mary, who later asks, "Don't you want me to start memorizing a script?" All in good time, dearie.

The moment of truth arrives when Mary finally meets Gloria.

"Let's see those legs!" Gloria barks. "And when I mean 'those legs', I mean from your toes to the top of your hat!"

When Mary balks at exposing herself, Gloria informs her that all the money Johnny Ryde has been giving her has gotten the actress deep in debt--to her! Then she threatens to call Mary's parents and tell them their daughter has signed on with a smut producer. Defeated, Mary starts hiking up her skirt. 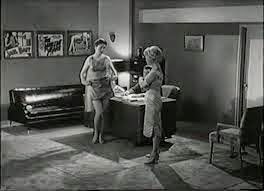 Starlet Mary shows some leg. Note the posters for Ed Wood's own movies on the wall.

Alas, there is more humiliation to follow. After hiking up her skirt, Mary is posing for Jaffe in a baggy swimsuit and a sheer wrap. Could things get any worse?  Of course they can! Dirk the psycho breaks into Gloria's house and finds Mary's racy pictures. Later he tracks the starlet down at the local park, where she's feeding the ducks. Dirk leaps out from behind a tree. The two fall into the water and thrash around. Mary screams and the ducks scatter, but it's all over very quickly...for Mary.

This latest smut-inspired murder gets Lt. Carson hot under the collar. He knows Dirk is carving up these smut models, but how can they catch him in the act--without anyone else becoming a victim? Suddenly Carson comes up with a brilliant plan. Well, it's not that brilliant, but it is a plan: have a male police officer dress up as a woman to trap Dirk! Sgt. Stone is floored by the idea. "What did you have for coffee this morning?!" he demands. Never the less, the plan just might work.

Next we see an (obviously) male police officer in a smart two-piece suit, pearls and heels trudging along a wooded path. Dirk, who has a second sense about these things, is hiding near by. He ambushes the decoy, only to have the copy toss him over his shoulder. While they tussle, a shadowy figure emerges to conk the cop on the head. It's Johnny! He hands Dirk a set of car keys and orders him to deliver a smut shipment out of town.

But it's a trap! See, Dirk has killed too many smut models for the Syndicate's taste and they want him gone. So Johnny rigs the breaks on an old car and sends Dirk on his fatal errand. Of course, Gloria approves. 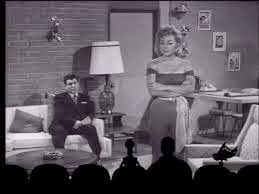 Johnny and Gloria discuss their mutual interest in smut.

Now "The Sinister Urge" really starts cooking. The breaks on his car do indeed fail, but Dirk survives the crash. He then high tails it over to Gloria's, where he confronts Johnny. Johnny tells Dirk it was Gloria who wanted him out of the way. To prove it, Johnny tells Dirk to confront Gloria, while he  hides in the bushes off the patio. Naturally, Gloria over hears everything. To make a long story short, Gloria plans to shoot Johnny and blame it on Dirk. And Gloria does indeed shoot someone , but the dusk of early evening obscures just who that someone is. No matter. Gloria calls the cops and Carson, Stone and deputies drop by. To Gloria's horror, she learns she has shot Dirk--D'oh! What's more, Dirk managed to kill Johnny before Gloria killed him!

Even when faced with the evidence, however, Gloria refuses to believe what has transpired.

Then Gloria makes a grab for her gun--which she had conveniently placed under her sofa cushion--but Lt. Carson stops her. It's still smoking and Gloria's finger prints are all over it! The Martha Stewart of Smut is lead away in handcuffs, guilty as charged.

In the Wood cinematic cannon, "The Sinister Urge" is a endless salad bar of incompetence. 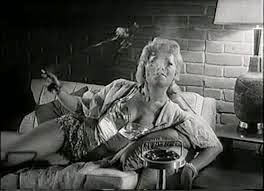 There is the stiff, awkward acting of the principals, especially Carl Anthony as Johnny Ryde, the ex-Hollywood hotshot now reduced to smut purveyor. In real life, Anthony was a commercial pilot who once flew a plane blindfolded. He also appeared on the TV show "You Asked For It." His other credits include "Plan 9 From Outer Space" and "Kung-Fu Cannibals".

Duke Moore (Randy Stone) has the dubious distinction of only appearing in Ed Wood movies. Along with "The Sinister Urge", Moore showed up in two Ed Wood TV projects ("Crossroads of Laredo" and "Final Curtain") as well as "Plan 9", "Night of the Ghouls" and "Take It Out In Trade." Kenne Duncan, on the other hand, began acting in silent films and accumulated over 200 film credits. Most of his work was in B-pictures and Poverty Row westerns, usually as a heavy. Duncan was also known by two nicknames "The Meanest Man In Movies" and "Horsecock" (the later reflecting his serial womanizing).

There are the continuity gaffes, such as the boom mike hovering above Duncan and Moore as they discuss their case in their plywood office; the unrelated footage of "Rock and Roll Hell" (made in 1956) that Wood snuck in to pad out the flick's running time; the fact that stunt double Conrad Brooks took Dino Fantini's place in Dirk's ill-fated car wreck; and the timely tidbit that Wood's director of photography (William C. Thompson) was blind in one eye! Sort sort of pulls everything together, doesn't it?

Then there is Gloria Henderson.

In my research, I could find only two other credits for this gal. Jean apparently had a rich hubby and pursued show-biz only as a hobby. Ed discovered her singing in a night club and hired her to play Gloria. She even supplied her own wardrobe! Although Fontaine had no previous acting experience, her role as the tight-clothes loving smut maven with a voice you could shave with, left an indelible impression on viewers for years to come. You can bet people like Gloria really do exist in the fringe-netherworld of smut that Ed Wood sought to portray.

And if they don't, they should.

So you see, movie lovers, for all its faults and failures, "The Sinister Urge" just might be Ed Wood's best film. It's bad in all the right places and features a cracker-jack performance from a tough broad who could give Bette Davis and/or Joan Crawford a run for their money.

Jean Fontaine, wherever you are, Junk Cinema salutes you!