Will Secret Agent Sam Casey Survive "Riding With Death"? Will The Audience? Part 1 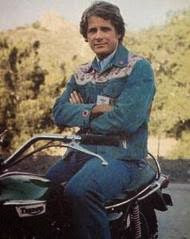 Ben Murphy is super '70's secret agent Sam Casey in "Riding With Death" AKA "Gemini Man" AKA Steven Bochco's worst idea before and after "Cop Rock".

Today we revisit the secret agent/spy genre, where suave men of the world like Matt Helm, Bart Fargo and Secret Agent Super Dragon are called upon to save our collective skins from some meanie intent on ruling the world.

First, "Riding With Death" (1976) was not a big budget feature film, but a TV movie stitched together from two (unrelated) episodes of the cancelled TV series "Gemini Man". 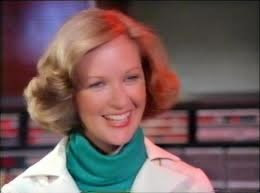 Fourth, our villain isn't some velvet-voiced megalomaniac who strokes a cat and resides in some fortified castle. Instead, he's a con artist who looks like Gavin MacLeod from "The Mary Tyler Moore Show" and "The Love Boat".

Sixth, you folks of the male gender will be disappointed that this spy caper doesn't have the regulation "Bond Girls" who lounge around in bikinis and ball gowns and have names like "Sparkle Badness" and "Pussy Galore". Instead, "Riding With Death" features female scientist/doctor Abby (Katherine Crawford) who is upstaged by her Dorothy Hamil-wedge, whom Sam thinks is "some gal." The other female cast member of note is named "Cupcake", who performs the herculean task of being Buffalo Billy Joe's cuddlemate.

However, Sam Casey does have one unique trait that sets him apart from other international men of mystery: he can turn invisible!

See, he's fitted with a "DNA stabilizer" that allows him to disappear and reappear at will. But only for 15 minutes at a time. Any longer than that and Sam A) will stay invisible forever or B) die. 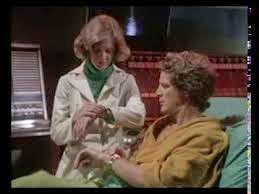 "The big hand tells the minutes and the little hand tells the hours..." Some gal Abby explains to Sam how his "DNA stabilizer" (disguised as a wrist watch!) works.

How Sam received his invisible powers is a rather long and preposterous story--which is why "Riding With Death" recounts it for us, even though the details are suppose to remain top secret and highly "classified." Suffice it to say, it involves a secret mission, an unidentified satellite on the ocean's floor, an explosion and Sam emerging unhurt from said explosion, but, as noted earlier, invisible. Thanks to highly experimental medical procedures and a "DNA Stabilizer", Sam Casey regains human form while retaining the ability to render himself invisible for 15 minutes at a pop.

But, shhhh, don't tell anybody because it's top secret!

That tedious exposition all cleared up, "Riding With Death" settles down to business by introducing us to the ultra groovy, ultra mellow secret agent Sam Casey and his co-workers at INTERSECT: boss Leonard Driscoll (Richard Dysart), a short-tempered fellow who is ALWAYS cleaning his glasses, and the previously mentioned Abby, who's job description is kind of sketchy.

Anyway, Sam learns his latest assignment is to protect Dr. Arthur Hale (Alan Oppenhiemer), a scientist who looks just like Murray Slaughter from "The Mary Tyler Moore Show." Dr. Hale has invented an additive/mixture called "Tripalodean"(sic) that supposedly triples gas mileage. However, baddies from "The International Oil Cartel" want to swipe the formula. In fact, when poor Dr. Hale arrives at INTERSECT for a meeting, two leisure suited goons ambush him and try to steal the formulas tucked in the doctor's briefcase. Lucky for him, Sam Casey was near by, turned himself invisible and saved the day.

"Relax! I'm one of the good guys!" Sam tells the flustered Dr. Hale. Gesturing at the retreating thugs he asks, "Any idea who those turkeys were?"

In order for Dr. Hale to deliver his Tripoladean formulas to the Federal Energy Agency branch office in Long Beach safely, Sam will--please follow along carefully--disguise himself as a trucker and drive a carefully outfitted big rig. This carefully out fitted big rig contains a secret safe room where Dr. Hale will hide out--and this is very important, too--in case there is any trouble along the way. 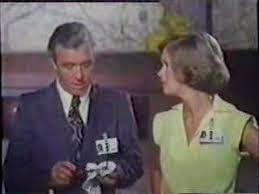 Dressed in embroidered jeans, a muscle T-shirt and a trucker's hat, Sam meets Dr. Hale at his laboratory. Unfortunately, "a piece of equipment" that is "absolutely essential" has been left at Dr. Hale's other laboratory. A go-with-the-flow kind of guy, Sam tells the scientist that they can swing by his place and pick the missing equipment up and still stick to their time table.

But it's a trap! See, Abby arrived at Dr. Hale's lab ahead of Sam. It's there she discovers that Tripoladean is a fake. In fact, the additive's "molecular structure breaks down" and it becomes an explosive "more virulent than nitroglycerin". Abby was in the process of telling Driscoll all this info (and that ten million of INTERSECT's money has been embezzled to Switzerland) when minions in cahoots with Dr. Hale disconnect her phone. D'oh!

The baddies then stuff Abby in a laundry bag and toss her in the back of Sam's big rig. And that's a trap, too! See, crafty Dr. Hale has secretly slipped into another laundry bag, which his goons cart away because "this bag isn't even his!" Thus, Sam drives off thinking Dr. Hale is snuggled securely in the back of the rig when it's really Abby trapped in there! Meanwhile, nasty Dr. Hale has jumped into a helicopter and fiendishly awaits for the Tripoladean to explode due to the jostling from the truck!

As "Riding With Death" tightens the tension screws, cracker Jim Stafford makes his appearance as Buffalo Billy Joe Hickens. He sings a ditty over his CB about "bein' a truck drivin' man", which Sam (who calls himself "Lazy Rider") claims to actually like. The two banter back and forth in CB jargon, with Buffalo asking Sam (rather suggestively) "to keep the Black Barts off my mud flaps."

Meanwhile, Abby has managed to get her self un-stuffed from her laundry bag and is banging hysterically on the walls and doors of the truck's safe room to attract Sam's attention. No dice. So she does the next best thing, which is rip the laundry bag into strips and constructs a bouncy seat for the two gallons of Tripoladean locked away with her. Abby clearly hopes this contraption will minimize the bumps and jostling on the open road, although it does look rather flimsy to me. 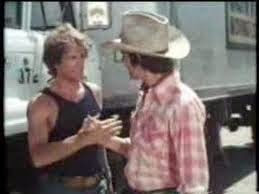 Oh, yes, Dr. Hale and one of his baddies are following Sam's rig in a helicopter. Through the magic of electronics, Dr. Hale can converse with Sam as if he's really in the truck's safe room! However, the evil doctor tells Sam that he's very busy filling out paper work and therefore has little time to chat--and Casey believes him!

Will Sam figure out that Dr. Hale is a fraud?

Will the Tripalodean explode as predicted?

Will Abby's whereabouts be discovered in time?

Tune in for Part-Two of "Riding With Death"!