Will Secret Agent Sam Casey Survive "Riding With Death"? Will The Audience? Part 2 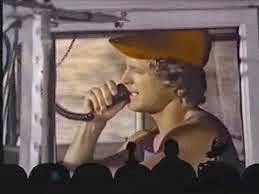 "Breaker! Breaker! Where is the road?" Secret agent Sam Casey (Ben Murphy) goes under cover as a long distance trucker in "Riding With Death", a TV movie culled from the cancelled TV series "Gemini Man."

We will now rejoin "Will Secret Agent Sam Casey Survive 'Riding With Death'?" already in progress.

Blissfully unaware that INTERSECT co-worker Abby is stuck in the back of his big rig with a lethal batch of Tripoladean (sic) OR that Tripoladean creator Dr. Hale is a baddie intent on killing him, ultra mellow secret agent Sam Casey is indeed riding with death.

Alerted by his new buddy Buffalo Billy Joe Hickens that there's "a bear in the air" (a helicopter) following him, Sam contracts boss Leonard Driscoll (who is NOT, strangely enough, cleaning his glasses at the moment) with the info. Turns out the chopper has been rented by one Luther Stark at the behest of Dr. Hale as "extra security" for his Tripoledean transport.

Hmmm. Sam finds all this a bit fishy. And Abby (whom Sam thinks is "some gal", remember) is still nowhere to be found. Putting two and two together (and getting five), Sam foolishly decides to continue his trek to Long Beach--never suspecting that friendly gas station attendant Carl his cut his break line on Dr. Hale's orders! 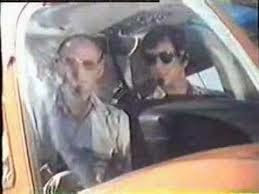 "Pay no attention to the men in the helicopter!" Dr. Hale and flunky Luther Hale hover above the action.

Traveling through a stretch of twisty mountain road, Sam soon finds himself with an out of control vehicle. By an amazing coincidence, Buffalo Billy Joe is just a few miles ahead. So when Sam comes upon Buffalo's "old iron horse", he drives his truck right up to the back of Billy Joe's truck. While Sam is doing this, Buffalo is slowly applying his breaks. The trucks nudge each other this way for several minutes. Although this "brilliant maneuver" saves the day, it looks as if the trucks are...um...how do I put this tastefully...engaging in a VERY personal and INTIMATE encounter of a decidedly PHYSICAL NATURE that often results in babies being conceived...or once this EVENT is completed the participants often light up a smoke and enjoy the milky after-glow...if you get my drift.

Once Sam collects himself, he calls Dr. Hale on the rig's intercom to apologize for the close call. When the devious doctor suggests they go to the Val-Co station a few blocks away "to speed up the repairs", Sam realizes his "passenger" is not in the truck's safe room, but most likely in the helicopter hovering over head. So he borrows a handy blow-torch and cuts a hole in the safe-room door. There he finds a relieved Abby, who promptly informs Sam of Dr. Hale's evil intentions. Sam then calls Leonard and gives him the scoop.

Observing these events from his chopper, Dr. Hale realizes the jig is up. He then grabs a high powered rifle and orders Stark to give him "a clear view" of the truck's gas tank.

"The whole town will blow up," Stark warns his boss.

"So the whole town will blow up," Hale replies. "Ten million, Luther, ten mill." (referring to the amount of money they have embezzled from INTERSECT, no doubt). 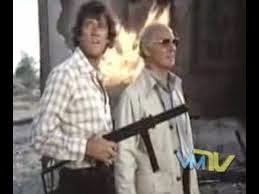 "I love the smell of Tripoladean(sic) in the morning; it smells like victory!" Flunky Luther Stark and Dr. Hale survey their damage.

As soon as Dr. Hale starts shooting, Sam jumps back into the driver's seat and hits the gas peddle. Abby screams that Sam will get killed, which causes Sam to scream back, "If I don't get this rig out of town, there ain't gonna be no town!"

Dodging bullets (and, one presumes, other cars and pedestrians) Sam barrels into an open field and bails out of the truck. He also turns himself invisible. The rig explodes as predicted, but the explosion is not as deadly as feared. (Tom Servo from "MST3K" felt that the explosion might have "singed the side of a Bed and Breakfast", but certainly wouldn't have flattened the town and I have to agree.)

Shortly thereafter, Dr. Hale and henchman Stark land their whirlybird. They want to inspect the kill zone to make sure Sam is truly dead. To their mutual surprise, Sam materializes before them and promptly punches Luther out. This makes Dr. Hale go positively nutsy and he pulls a gun on Sam. Sam proceeds to turn himself invisible again, which doesn't stop the unhinged Dr. Hale from madly firing off the rounds of ammo into the air. His piece empty, Sam reappears, tisk-tisking Dr. Hale for his foolish scheme.

The police and INTERSECT arrive shortly. Being lead away in handcuffs, Dr. Hale excitedly tells Leonard Driscoll that Sam "isn't human." The exasperated INTERSECT head tells Dr. Hale "he's imagining things" and experiencing "the delusions of a guilty mind." While Abby and Sam laugh uproariously, Dr. Hale continues to rant and rave, causing Leonard to scream "OP-TIC-UL-ILL-LU-SION!" at the squad carrying Dr. Hale to the poky.

Sam and Abby share a laugh as Dr. Hale is carted off to jail; boss Leonard Driscoll is not amused.

Tune in for part 3 of "Riding With Death" coming to this blog very soon!