Will Secret Agent Sam Casey Survive "Riding With Death"? Will the Audience? Part 3 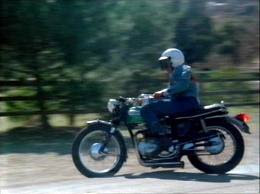 This blog has been shining the spotlight on the exploits of super mellow '70's secret agent Sam Casey (Ben Murphy) as showcased in "Riding With Death" (1976).

"Riding With Death" is two unrelated episodes of the cancelled TV series "Gemini Man" scotch-taped together, which explains why the review/discussion of the flick had to be a multi-parter. Nevertheless, "Riding With Death" has taken viewers on a thrill ride of suspense (?) where a Murray Slaughter-esque scientist faked a gasoline additive and folks learned that a "DNA stabilizer" allows ultra groovy secret agent Sam to turn invisible for 15 minutes a pop.

Then there was the scene where two big rigs looked as if they were engaging in an activity many GOP presidential hopefuls warn against even married people doing, but we won't dwell on that.

Moving on to the second half of "Riding With Death", the focus switches from baddie Arthur Hale to baddie Robert Denby and from long haul truckers to professional race car drivers. 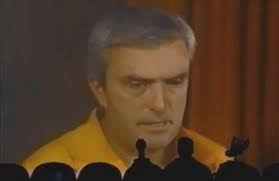 "The elusive" Robert Denby (B-movie stalwart and Roger Corman regular Ed Nelson) is the manager/promoter of the professional racing team known as "The Baxter Special". Why is Denby considered so "elusive"? Actually, only INTERSECT honcho Leonard Driscoll seems to think Denby is so "elusive". In fact, he's down right obsessed about it. Why? Because Leonard is convinced Denby has been behind "every major act of military sabotage in the last five years."

That's a pretty serious charge to level at somebody. What proof does Driscoll have that Denby is guilty?

Well... none. He just has "a gut feeling" about it. And to prove his gut is right, Leonard has (according to INTERSECT employee Elliot) "spied on (Denby), bugged* him, illegally searched his premises (and) finally drove (Denby) into court" where "Judge Witherspoon" issued a restraining order against Leonard--and everybody at INTERSECT--to leave Denby alone.

*The flick never explains what 'bugged' means. Did Driscoll plant listening devices in Denby's house or did he behave like a jerk sibling who wags his fingers in your face and repeatedly says, "Does this bug you? I'm not touching you. Does this bug you?"

His hands tied, Leonard sends super mellow Sam Casey (who knows nothing about the restraining order) to get the goods on Denby for him. Lucky for Sam, old buddy Buffalo Billie Joe Hickens (Jim Stafford) has a job on the Baxter Special pit crew and was recently appointed relief driver. But it's a trap! Denby hand picked Buffalo to be his "patsy". Why? So Denby can lace the carburetor of the Baxter Special with something called "due-tree-um"(sic) and blow the vehicle to kingdom come via remote control.

In case you're wondering, the head of Baxter Electronics is in cahoots with Denby, so having the Baxter Special blown to smithereens is OK by him. However, it seems kinda counter-productive to go to all the trouble of sponsoring a professional racing team only to blow your prized car up. I guess some folks are just funny that way.

INTERSECT boss Leonard Driscoll (and his mustache) contemplate how to apprehend "the elusive" Robert Denby.

Why does Denby blow stuff up with "due-tree-um"? The flick never says. While baddie Arthur Hale was out to snooker INTERSECT out of 10 million, Denby appears to have no specific aim. So why all the "military sabotage"? Is Denby out for revenge? Working for the Commies? Or is he doing this just for kicks? The answer, just like Robert Denby, remains elusive.

Anyway, Buffalo gets Sam a job on the Baxter Special crew and introduces him to his cuddlemate, "Cupcake" (Smith Evans. Yes, that's her real name.) Cupcake's name is actually Tina and she's The Baxter Cup promotion girl. To celebrate Sam's new job, the trio head over to the local watering hole where Buffalo plans to participate in its weekly amateur contest (no comment).

No doubt, Buffalo thinks Cupcake is "some gal", which makes us wonder what the original "some gal" Abby is up to.

Abby (and her expanding hair) are presumably at INTERSECT, where she drew the unfortunate assignment of monitoring Sam's whereabouts. This Abby does via a super-duper computer, although how this super-duper computer can track Sam's every twitch is never explained.

While Abby watches her monitor with an expression of relentless boredom, Buffalo mounts the stage to sing a song about "out running the revenue". Shortly thereafter, two patrons, obviously used to more sophisticated fare (like "Disco Duck" or "Muskrat Love", two current top-40 hits at the time) begin to heckle Stafford's performance. A bar-room brawl erupts and it's clear Buffalo needs some help. To save his dumb cracker friend's hinder, Sam turns himself invisible, which allows him punch out the hecklers to make it look as if Buffalo is the bruiser.

The hecklers are duly vanquished and Buffalo is delighted, believing he really did kick those guys asses. "Dynamite!" Buffalo exclaims. "This fist packs pure dynamite! Wahoo!"

A few days later, Leonard arrives to speak to Denby. The two antagonists have a testy exchange where Denby accuses Driscoll of harassing him, which violates the restraining order. He also wonders if Driscoll of having a "conflict" over his "ethics".

"None, turkey!" Leonard spits back.

"You save your nicknames for your punks and muggers!" an angry Denby flares. 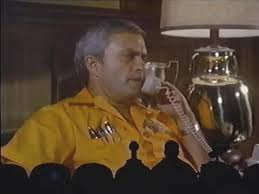 Ed Nelson phones his agent to see if he can get him out "Riding With Death".

The only witness to this heated exchange was Sam, who, naturally enough, was invisible.

Realizing that Denby plans to blow up the Baxter Special with Buffalo at the wheel, Sam tries to convince his cracker cohort not to drive the car. Of course, Sam can't tell Buffalo exactly why he can't drive the Baxter Special; that would blow his "cover" and secret agents are nothing without their cover. Buffalo refuses to heed Sam's warnings, which causes the friends get into a nasty snit-fit-- egged on by Cupcake, who accuses Sam of "wanting all the glory" of driving the Baxter Special "for himself."

What the ex-buddies don't know is that Cupcake/Tina is in cahoots with Denby as well. Cupcake was given the unappetizing assignment of snuggling up to Buffalo in order to keep tabs on Denby's chosen "patsy". Judging from how ga-ga Buffalo is over Cupcake, the conniving little minx did her job too well. Why, the dumb hick even proposes marriage and she accepts! Of course, the fact that Cupcake is counting on Buffalo biting the dust probably had everything to do with her saying yes, since no sane woman would marry such a putz.

As all secret agent sagas must, "Riding With Death" reaches its nail biting climax during a heavily populated event, in this case an important car rally. Unbeknownst to Buffalo, an invisible Sam has snuck into the Baxter Special, which allows the car to finish its race when Buffalo passes out from those fake "dehydration pills." Collapsed on a couch in Denby's trailer, Buffalo woozily tells Cupcake that Sam is "one of the good guys" and that he works for INTERSECT.

How did Buffalo discover this? Remember the snit-fit our two BFF's got into? Seconds later, Sam is getting beat up by some thugs in a parking lot and Stafford jumps in to help him. In the men's room washing off the blood, Sam tells Buffalo he's a secret agent. Buffalo, dumb as a post, has to be told what a secret agent is, but relaxes when he realizes it means Sam doesn't work for the IRS. That's  how Buffalo discovered the truth about Lazy Rider.

"I need to put in for a transfer": "Some gal" Abby (Katherine Crawford) is bored by her job monitoring Sam Casey's whereabouts--and who could blame her?

Meanwhile, Denby realizes he's been had and vows to blow up the Baxter Special before Driscoll can impound the card (observant readers will remember that Denby always planned to do this, so his sense of urgency is a bit misplaced). As the baddies bicker among themselves over who screwed up, Buffalo staggers off to find Sam.

For the second time in the flick, Sam must once again drive a motor vehicle tainted with explosives into an open field to avoid death and destruction. Only this time Buffalo is riding shot gun, presumably to give Sam the proper directions to the said open field before the Baxter Special goes boom, which it does.

"Riding With Death" finally (!) ends with "the elusive" Robert Denby arrested. When next we see him, Sam is enjoying a beverage at the local watering hole, where Buffalo is singing him a song of thanks. Abby watches the whole thing on her computer screen and tries not to throw up.

"Gemini Man", the TV series our feature film was culled from, was cancelled after 5 episodes. Frankly, I'm surprised it lasted that long. What may have doomed this series (and its TV movie sibling) to such a fate? Here are my observations: 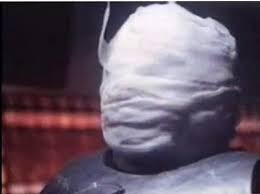 Super mellow secret agent Sam Casey not only can turn invisible (for 15 minutes) he can also not breathe!

*The writers were boobs. Remember Sam's secret mission to transport Dr. Hale to the Federal Energy Commission's HQ before closing hours? INTERSECT HQ was located in Torrence, CA; their destination was Long Beach, CA.--which was at most 45 minutes away, depending on traffic. Even so, Sam Casey was given 13 hours to make to a 45 minute trip! The writers must not have figured the audience would pick up on this discrepancy--but they did. Many thanks to TV Tropes.com for pointing this out, too.

*The writers were boobs, part 2. At one point in the flick, Dr. Hale asks their location. Sam replies "Cedarville"--which is in northern California and 11 hours away from Long Beach. D'oh!

*Who is who? Crabby INTERSECT honcho and aggressive mustache wearer Leonard Driscoll was wrongly identified--even by me!--as played by Richard Dyshart. Wrong! William Sylvester actually played Driscoll until he was replaced by Dyshart. In the credits for "Riding With Death", Dyshart gets top billing over Sylvester, even though his part is smaller.

*You're some gal! You're fired! Poor Katherine Crawford and her out-of-control- hair were also let go, although her role wasn't recast.

*Let's do the Time Warp. "Riding With Death" was supposedly set "in the future"; 1983 to be exact
However, the producers of the show didn't even try to disguise the fashions, slang and hair-dos of 1976, the year the program was made.

*The writers were boobs, part 3. Sam supposedly earned a law degree from Harvard. This caused Mike on "MST3K" to crack that Casey was allowed into Harvard under a program called "Admit the Dumb."

*The writers were boobs, part 4. When Sam Casey is bandaged up in the hospital, nobody thought to give him nose or mouth holes. Sure, Casey was invisible, but he still had to breathe!

The "executive story consultant" for "Gemini Man"/"Riding With Death" was Steven "Golden Gut" Bochco, the man who gave TV "Hill Street Blues", "L.A. Law", "NYPD;Blue"...and "Cop Rock." You may recall that "Cop Rock" was a heavily hyped attempt to marry cops/robbers/lawyers story lines with musical numbers. The show was a delusional disaster of the highest order. Considering all the nutty mistakes Bochco allowed to slip through in "Riding With Death", no one should be surprised he would go on to make an even bigger mistakes with "Cop Rock".

Thirteen hours to get to Long Beach from Torrance? That's poor form for "an executive story consultant."

Until next time, watch your rear-view mirror when making a lane change, and SAVE THE MOVIES! EVEN THE TV MOVIES!