Gideon Drew Loses His Head In "The Thing That Couldn't Die". 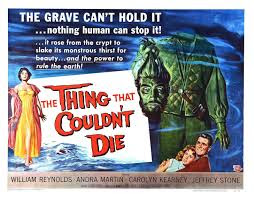 "The Thing That Couldn't Die"...except at the box office!

Summer, you know, has become the film industry's biggest season, where the studios unleash their "blockbusters" in hope vacationers and kids on summer break will drop lots of coin on movies that feature explosions, car crashes, huge rouge critters, aliens, massive fire balls, tidal waves and even the occasional plot point and realistic conversation.

Lots of "blockbusters", of course, are about "super heroes" who posses "super powers". Which begs the question: What kind of super power would you like have? Which begs another question: is having super powers--or even "special powers"--really all it's cracked up to be?

We explore this issue in today's feature "The Thing That Couldn't Die" (1958), where a Cindy Brady-ish young woman named Jessica (Carolyn Kearney) can "find things", yet it's clear her "psychic abilities" are more a pain than a pleasure--unlike the movie, which is just a pain (rim shot).

The flick opens with Jessica using a divining rod to locate a spring for her annoyingly shrill Aunt Flavia (Peggy Converse). This is about the time that I should explain that Jessica's divining abilities are a bit haphazard. See, she can't locate something unless it's of her own free will and there is no monetary gain in it for her or anybody else. This kinda puts a crimp in Jessica's "psychic powers", but it does ensure that her talents will be used for good and not evil. Or so she thinks.

While Jessica tries to find her aunt's spring, up cantors guests Gordon Hawthorne (William Reynolds), an anthropology/history professor, Hank (Jeffery Stone), a beatnik painter, and Linda (Andra Martin), Hank's cuddlemate and muse (who looks like a cross between Liz Taylor and Suzanne Phesette). 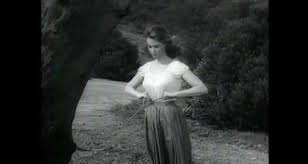 Gordon is a rather tepid fellow who dresses in business casual even when he's on vacation. He's been a guest on Flavia's ranch for many years and has obviously developed an fixation on the perky new breasts Jessica has spouted. However, the egg-head prof is a skeptic about Jessica's "psychic" abilities--even after she tells him where Linda's missing watch can be found (in a trade rat's nest under an old oak tree). It's in that same nest that Gordon finds an old fleur-de-lis amulet. He polishes it up and gives it to Jessica, which allows him another chance to peek down her blouse.

Of much more consequence than Linda's watch is the treasure chest Jessica's divining rod leads her to. Originally Jessica thought she had found Aunt Flavia's spring when her rod magically pointed straight down--and, no, I am NOT going to indulge in any childish jokes comparing Jessica's divining stick to a certain sensitive part of the male anatomy that is known to point upward if aroused and hang limp as a noodle if, you know, it's not working properly. Let's all try and be mature, OK?

Ranch hands Boyd (who is sneaky and mean) and Mike (who is simple and slow, but very strong), dig up the chest, despite Jessica's hysterical pleas that it's "evil". Aunt Flavia is about to crack it open when Gordon stops her. The chest comes with an inscription "in old English" that warns opening it will cause grave harm to "your immortal soul." Besides, the chest, in its natural state, could be worth "thousands". Aunt Flavia, always on the look out to make a fast buck, agrees to leave the chest as-is and locks it up in her sewing room for safe keeping. Gordon then scampers off to fetch an antiquities professor who lives near by.

Jessica refuses to stay under the same roof as the "evil chest", so she bunks with Linda for the night. Linda and Hank, meanwhile, head off to the local square dance. With Aunt Flavia asleep, Boyd leaves Mike to guard the sewing room so he can go peep on Jessica. This proves to be a futile quest, as Jessica is covered in enough frilly under things to douse the fire of the most patient pervert. 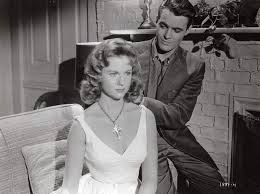 Gordon admires the view as he gives Jessica a magical amulet.

Later that evening, Boyd steals Flavia's key to the sewing room and convinces Mike to break the chest open. This Mike does, only to find not gold or treasure, but the disembodied head of one Gideon Drew (Robin Hughes), which is still alive!

Who is Gideon Drew? He was a nasty piece of work who worshipped Satan. When the English explorers Gideon worked with discovered his evil ways, they decreed that his head should be chopped off and placed in a chest--the very chest Jessica uncovered. Drew's body, on the other hand, was placed in a coffin and buried "far away". This arrangement would supposedly ensure that the baddie would never "die" and thus suffer for all eternity--as will anyone who watches this movie (rim shot!).

Oh, and that fleur-de-lis amulet Gordon gave Jessica? It's the only thing that can kill Gideon AND protect people from his "evil eye". See, if you look into Drew's peepers, you become "his slave" and will do his bidding and your personality will change and you will become bad, too.

How do I know all of this? Because I watched the movie! And this is what transpired: 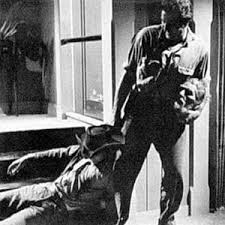 The nasty noggin of Gideon Drew claims its first victims: bad Boyd and the bewitched Mike.


Then Boyd shows up. He berates Mike for opening up the chest and Mike promptly kills him (on Drew's orders). Cradling Drew in the crook of his arm, Mike pulls Boyd's body along as they disappear into the darkness.

At the same time, Aunt Flavia hears Mike kill Boyd and screams like a dental drill until Jessica comes running to save her.

Seconds later, Gordon and the antiquities professor (a rather tweedy fellow named Dr. Ash) arrive at the ranch. Aunt Flavia calls the police. While Gordon and Dr. Ash fuss with the chest, Jessica dips her divining rod into Boyd's blood and goes off in search of his body. Out divining in her frilly nightie, Jessica suddenly stops, faints and has one of those weird flashbacks where we see Gideon Drew beheaded and condemned to his headless "living death".

Snapping out of her fainting spell, Jessica find's Boyd's body and shrieks like a car alarm. She then runs pell-mell back to the house, her nightie trailing behind her.

Skulking around the ranch is poor slave Mike and Gideon's head. Watching the action from a safe distance, dastardly Drew realizes that Jessica can find the coffin holding his body. However, as long as she's wearing that amulet, Jessica will never fall under the spell of his evil eyes. So the crafty cranium begins figuring out how to separate Jessica from her jewelry.

Heads up! It's Gideon Drew and his evil eyes.

Simpleton Mike having served his purpose, Gideon next sets his sights on Linda. After bewitching the model, Gideon's head orders her to snatch Jessica's amulet. This proves hard to do, as Gordon had told Jessica the necklace would protect her and that she should never take it off. Totally over the moon about Gordon, Jessica complies. Even when Linda offers Jessica one of her fancy frocks in return for the necklace, Jessica makes pouting faces and refuses to relinquish it. However, when Gordon asks Jessica for the necklace (so he can make a cast of it), she willingly hands it over. As every horror fan knows, this is a big mistake.

Now unprotected from Gideon's evil eyes, the nasty noggin is ready to bewitch Jessica. Under the guise of giving her a fancy hat, Jessica opens Linda's hat box and comes peeper to peeper with Gideon. Now under his spell, the normally prim Jessica puts on a low cut black dress and agrees to find Gideon's body.

Of course, Jessica's dress sense isn't the only thing that has changed. She's become more assertive and sexually aggressive--especially towards the tepid Gordon. While taking a break from digging up Drew's coffin, Jessica plants a big, open-mouthed kiss on the befuddled professor. After Gordon comes up for air, Jessica then pushes him away and barks, "Now, get back to work!" Totally confused, Gordon does as he's told.

Ready for a super scary reveal? Then watch Vera Miles finding Mother's corpse in "Psycho". "The Thing That Couldn't Die" has an all together nuttier climax.

OK, the coffin is found and duly dug up. Our happy campers then cart it back to Flavia's front room. Gordon and Professor Ash fiddle with the coffin's hinges when Gasp! Shock! Horror! the headless body of Gideon Drew pushes his way out of the casket. While Aunt Flavia screams, Gordon and the rest of the cast react in horror as Jessica places Gideon's head on his severed neck stump. Presto! Gideon Drew is back in one piece and ready to rumble! 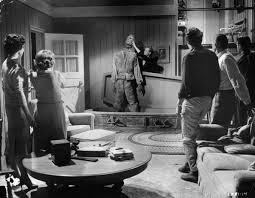 "Let me help you on with that..." The bewitched Jessica reunites Gideon's head with his body.

As all baddies do, the first thing Gideon wants is to drink human blood. Like a satanic Goldilocks, Drew judge's Linda's blood to be "too cold" and Aunt Flavis's to be "too dry" and Hank's blood to be "tainted" by "the vile" hooch he drinks. If you think Gideon will find Jessica's blood "just right", well, think again! Satan's minion actually prefers GORDON'S BLOOD! In fact, Drew is about to move in for the kill when his intended victim flashes Jessica's amulet in his face.

Cowering in horror, Gideon is eventually pushed back into his coffin; Gordon tosses the necklace in for good measure. When the gang reopens the casket seconds later, they find that the evil Gideon Drew is now nothing more than a collection of dry, dusty bones. The thing that couldn't die is now finally dead--and for good, too.

With Gideon now a skeleton, Linda and Jessica are freed from his evil spell. Linda embraces Hank; Jessica embraces Gordon. All is forgiven. Don't you love a happy ending?

Well, that's that. I've worked hard to end this post, but I can't come up with a suitable conclusion. To be fair, I just finished teaching elementary summer school and I may need to recharge before I can come up with a bang-up finish worthy of the goofily obscure flick. Therefore, enjoy what I have written, seek out the flick and check in later to see if inspiration strikes and I can end this post properly. Also, SAVE THE MOVIES!