Junk Cinema Salutes The Hilarious Debut Of Paul Newman In "The Silver Chalice" Or "Lord, What Have I Done To Deserve This?" 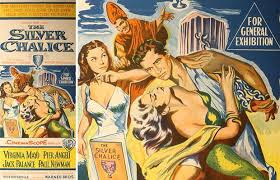 Paul Newman is more life-like in "The Silver Chalice"s movie poster than he is in the actual film.

But even the greatest (and best looking) among us can have humble beginnings.

And none were humbler or more hilarious than Paul's cinematic debut in 1954's "The Silver Chalice", a thick slice of biblical baloney where Paul cavorts with the likes of Jack Palance, E.G. Marshall, Lorne Greene, a young Natalie Wood and the irrepressible Virginia Mayo--who gets top billing!

While enjoying the comforts of his new home, Basil falls for teen slave Helena (Natalie Wood in an awful blond dye-job). Helena yearns to be free and to become "a great lady", so she decides to runaway. This breaks the young Basil's heart, but he still gives her money and an ugly ring as parting gifts. After vowing eternal love and sucking a bit of face, Basil and Helena bid each other a sad Au revoir.

Several years pass and E.G. Marshall drops dead. Still pissed off Uncle Linus then sells the grown up Basil (Paul Newman) into slavery as a silver smith. Paul being Paul, he hates being a slave and being chained to a wall, but his silver pieces are the best to be found.

Out of the crowded market place swishes the adult Helena. She's come to warn Basil that his uncle plans to snuff him. Paul is astonished to see Helena--and so will you. Basil's childhood sweetie (now played by Virginia Mayo) has morphed into a later-day Zsa Zsa Gabor, flaunting blinding blond hair, outre' jewelry, chiffon gowns, bat-wing eyebrows and floorescent eye shadow. Since escaping to freedom, Helena has become the side-kick/assistant/hostess/cuddlemate of the one and only Jack Palance. He is known as Simon the Magician and he regularly dazzles the great and the good with his amazing feats of prestidigitation--such as pulling bunnies out of helmets and pretending to chop off Helena's head.

Relaxing after one such show, Simon is visited by Mijamin (Joseph Wiseman). This fellow wants to hire Simon to become "the new messiah" who will convince the rubes of Jerusalem to stop following that other messiah (AKA Jesus). Then, Mijamin hopes, they will sign up for his secret army and help kick the Romans back to Rome.

Because Simon harbors a messianic complex of his own AND has long nursed a grudge against the disciple Peter (don't ask), the wily magician agrees to Mijamin's somewhat convoluted plan.

Meanwhile, Basil has another visitor: Luke the Physician (Alexander Scourby). He has come to set Basil free so he can fashion a silver chalice to hold the cup Jesus used in The Last Supper. At first Basil is skeptical of Luke's intentions, but when Uncle Linus arrives to kill him, Paul decides to follow Luke. 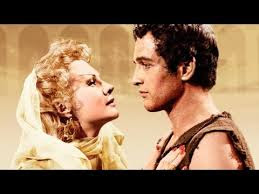 Adult Helena warns the adult (and very bored) Basil (guess who!) that his life (and possibly his future career) are in danger.

They travel to Jerusalem and decamp at the house of Joseph of Arimathea, an elderly chap who plans to foot the bill for Basil's services. Also present is Joseph's grand daughter Deborah (Pier Angeli), whose Audrey Hepburn-ness contrasts sharply with Helena's Zsa Zsa Gabor-ness. Deb falls for Basil right away, but the silver smith (having reunited with Helena) can't choose between these polar opposite cuddlemates.

What follows next is a lot of tedious back-and-forth with A) Basil having to decide between Deb and Helena, B) Basil trying and failing to capture Jesus' likeness, C) the Christ Cup and its silver chalice being stolen and then recovered, like, 100 times and D) the whole cast winding up in Rome where a foppish Nero holds his over-the-top court. Oh, yes, and there is another subplot about Basil/Paul finding a living witness to his adoption, which brings him into contact with the future St. Peter (Lorne Greene). However, since the movie drops this plot point like a dead weight, I wouldn't fuss over it too much.

Jack Palance, meanwhile, is enjoying his fame as "the new messiah" just a little too much and its gone to his head. In his on going quest to diss Peter, Simon proposes a fancy-pants trick where he will fly off a tower--aided by secret wires and pulleys, of course. What's more, the master showman will present this feat of daring-do in the Coliseum, in front of thousands, with Nero in attendance. What could possibly go wrong?

Oh, I don't know, maybe, like, Simon going batty and believing that he is a messiah and possesses divine powers of  his own and therefore he believes can fly on his own accord without all that secret elaborate rigging he has strung up?

While Helena and a lackey try to stop him, Simon emerges at the top of his especially constructed tower. He's wearing red long johns decorated with large, black squiggly designs that resemble sperm. To the roar of the crowd, Simon jumps off the tower intending to fly...only to go SPLAT! on the ground below. 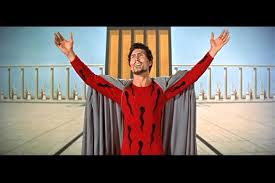 "I believe I can fly!" Simon the Magician (Jack Palance) prepares to meet his doom.

Horrified by the gory spectacle, and fearful that the citizens of Rome will begin to doubt his own divinity, a panicky Nero insists that Simon's sidekick Helena be shoved off the tower as punishment for her part in deceiving Cesar.

Now, you might be wondering if Basil saves the day and rushes to Helena's side and saves her. Sorry, he does no such thing because Basil knows nothing about her role in Simon's ill-fated splatter-fest. See, Paul has been dragooned into being Nero's new in-house sculptor. He's stuck in a room and forced to carve Cesar's new bust. Then in strolls the head of Nero's kitchen (a secret Christian), who helps Basil to escape. This is accomplished when the crowds go berserk over Simon and Helena's double-death dive and start rioting and looting; Basil/Paul merely slips out among them and returns home to Deb, whom he finally realizes he loves.

Alas, when Basil gets home, Deb is in tears because someone has stolen the Christ Cup and the silver chalice again, this time for good. There is nothing for these poor kids to do but declare their undying love for each other and leave Rome, which they do. The End.

As biblical epics go, "The Silver Chalice" might have sunk into well deserved obscurity under the weight of its own tedium and bad taste (especially in costumes!) However, because Paul Newman is our hero Basil and this is his cinematic debut and he would soon become the highly respected performer of stage and screen we all know and love, "The Silver Chalice" would persistently delight legions of bad movie fans for decades to come.

And make no mistake: Paul had every reason to be embarrassed about his dismal debut. For instance, the tunic he is forced to wear showcased his bony knees. The experimental sets used in the flick caused The New Yorker magazine to sneer that they resembled "an igloo community (crossed with) one of Frank Lloyd Wright's more advanced designs." The script, penned by one Lesser Samuel's (yes, that's his real name!) forced Paul to call a fellow cast member "a sniveling toady!", while a Roman solider lobs this memorable insult at some hapless jerk: "Head of mutton!" 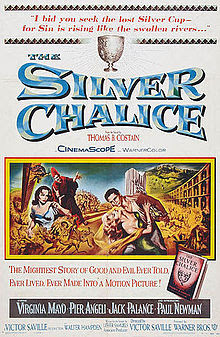 Yet another poster for "The Silver Chalice"...which is more exciting than the flick!

Meanwhile, poor Virginia Mayo has to blather these endearments to her many male admirers as she pours them wine: "My curly headed ram", "my little vestal virgin in armor" and (my fave) "fear not, my little eaglet of Rome!"

I believe the Greeks have a word for such goofy mutterings and the word is... "Yeech!"

Paul, who called "The Silver Chalice" the "worst movie of the 1950's", wasn't spared when critics got a look at the picture. New Yorker magazine declared that Paul "deliverers his lines with the emotional fervor of a Putnam Division conductor announcing stops." The New York Times, on the other hand, dismissed the future super star as "rarely better than wooden."

Perhaps Paul's stolid demeanor in the flick is understandable in light of this info: he had just lost the role of Cal in "East of Eden" to James Dean when he was cast as Basil. Having missed out on such a great part only to have to appear in "The Silver Chalice" would be enough to make ANY talented actor sulk, at least in my opinion.

Of course, as we all know, Paul would ultimately triumph over his dismal debut and quickly establish himself as one of Hollywood's finest, classiest and most versatile talents. 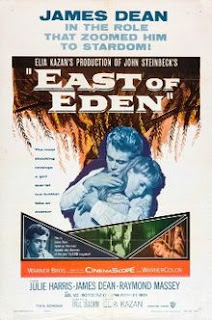 "East of Eden": The movie Paul Newman wanted to star in...and who could blame him!

Such would not be the case for Newman's higher billed co-star Jack Palance. Although he, too, would eventually win an Oscar (for "City Slickers"), Jack would toil for many years in such turkeys as "Che!" (as Castro, no less), "Angels Revenge" (a "Charlie's Angel's" rip-off featuring Alan "Skipper" Hale and a barely coherent Peter Lawford) and 1989's "The Outlaw of Gor", a straight-to-video dubbed Italian cheapie that was lovingly lampooned on "MST3K".

In fact, Jack's role in "The Outlaw of Gor" was eerily reminiscent of his part in "The Silver Chalice": he's again cast as a shifty magician (this time called "Xenos") who parades around in some outlandish costumes and goofy hats--one of which resembles a loaf of buttered split-top bread.

In conclusion, as bad as "The Silver Chalice" was, quite a few cast members did manage to rise above it's biblical bunk and do well for themselves. Besides Newman and Palance, E.G. Marshall would appear on "The Bold Ones", Lorne Greene could look forward to a long run on "Bonanza", Natalie Wood (the young Helena) would star in such films as "West Side Story" and "Splendor in the Grass" (to name two) and Alexander Scourby (Luke) would be the first actor to record the whole Bible on tape.

Which just goes to prove that the Lord does work in mysterious ways.

Until next time, keep your toga clean and pressed and help me SAVE THE MOVIES!