Jack Palance as the shifty "high priest" Xenos, modeling one of his nifty costumes in "The Outlaw of Gor".

Hey movie lovers! Have you heard the news? Cabot has returned to Koruba! Aren't you psyched?

Who is Cabot you ask?

Cabot is Professor Tarl Cabot (Urbano Barberini), a guy with extremely '80's hair, who is the savior of the mythical kingdom of Koruba in the parallel world of Gor in the partially dubbed, filmed in South Africa, straight to video turkey trot called "The Outlaw of Gor" or "The Outlaw" or "Gor ll" (1989).

Admittedly, you have to wade very, very deep into the backwash of Junk Cinema to wrangle a golden gobbler like this, but it's worth it. That's because "The Outlaw of Gor" is a deluxe cheese combo platter piled high with frizzed-out '80's hair, laughable F/X, men in short skirts, a brave midget that looks like Edgar Winter and, best of all, Jack Palance as the shifty priest Xenos, parading around in a series of outre' caftans and goofy hats. 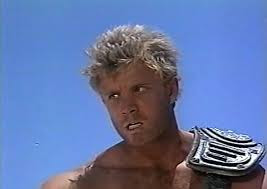 "The Outlaw of Gor" is in fact the sequel of  the movie "Gor", but you needn't worry. Director John "Bud" Cardos (Never trust a filmmaker who identifies himself like this. After all, do you think John Ford would allow himself to be called John "Bud" Ford? Or that Alfred Hitchcock would call himself Alfred "Tubby" Hitchcock? Not on your tin-type!) helpfully supplies viewers with some disjointed flashbacks to ensure we're all on the same page.

"Gor" begins in the present (well, 1989) at a disco/night club/single-mingle place called "The Pullman". Professor Tarl Cabot (Barberini) is glumly sitting at the bar watching his supremely annoying co-worker Watney Smith (Russel Savarolier) harass and molest the female patrons. Then the red mood ring Cabot wears begins to flash. Through the magic of special effects ( really just flashing lights and some stage hands shaking Cabot's car off screen) Cabot and Watney find themselves in Koruba, "a savage land" made up of sand, deserts and false front housing.

Cabot, you see, has visited this place before and is quite the local hero. That is made unflinchingly clear when Cabot enters Koruba's capital city and main shopping district and all the extras scream "Cabot! Cabot! Cabot!" at the top of their lungs. Of course, it's not just the lowly towns people who are thrilled to see their hero; King Marlenus (Larry Taylor) is just as delighted, exclaiming, "Cabot! Cabot has returned my darling!" to his much younger (and obviously evil) wife Queen Lara (Donna Denton).

Also thrilled by the Cabot's arrival is Princess Talena (Rebecca Feratti), Marlenus' daughter and Cabot's great love. HRH looks like Jennifer Beals from "Flashdance" with enormous pouffed out hair and a wardrobe clearly pinched from "Solid Gold". Over hearing the commotion associated with Cabot's arrival, she runs to her window and shrieks, "Cabot! Cabot! Cabot, you've returned!" and rushes outside to embrace him. 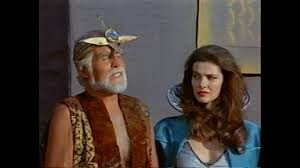 The great and the good of Koruba throw Cabot a huge welcome party and later Cabot decides to ask Marlenus for Talena's hand in marriage. Before he can do that, however, evil Queen Lara slips the king a Mickey (concocted by Xenos) and stabs him. Even worse, she says Cabot killed the king---and so-called friend Watney (promised lots of sex from Lara) provides her an alibi. So poor Cabot and his midget friend Hupp (Nigel Chipps) are forced to make a run for it. Princess Talena, meanwhile, is dragged off to prison, as is stooge Watney.

Wandering around the vast territories of Koruba, Cabot is disgusted to learn that slavery--which King Marlenus had outlawed--was making a comeback under the rule of Queen Lara. In fact, Cabot is so disgusted by the reintroduction of slavery that he rescues a scantily clad slave girl who looks quite a bit like Talena. Later that evening, the unnamed slave girl snuggles up to Cabot and pants, "Master, allow me to pleasure you."

Cabot, remember, is madly in love with Talena, so he begs off the gal's generous offer. When she looks confused, Cabot realizes that this is a "teachable moment" and thus patiently explains to the ex-slave that he's "a free man" who is in love with "a free woman" and because of that freedom he and his freely chosen cuddlemate are "free to give themselves to each other freely" (i.e. whenever they want to). What's more, Cabot informs the gal that she is a free woman, too, and is now free to give herself freely when she falls in love with the right man, provided that he is free also, but don't worry, because he, Cabot, will make sure everybody in Koruba (and the surrounding areas) are free, too.

After Cabot's speech, the newly freed slave gal still looks confused, so everybody goes to sleep.

Unfortunately, the newly freed slave girl has little time to savor her freedom. That's because Queen Lara has sent "a hunter" out to catch Cabot and his gang. Sure enough, the hunter tacks Cabot down in record time and marches everybody back to Koruba. 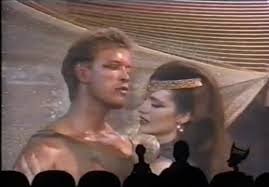 Queen Lara tries to get Cabot to join her on the dark side. (Note Mike and the 'bots silhouettes in the picture.)

Before tossing him in a jail cell, Queen Lara tries to entice Cabot into ruling with her and sweetens the deal by promising him oodles of sex. Cabot is no Watney, however, and he refuses to buckle under. So he's sent into the bowels of the castle to be whipped and force-fed guacamole (but no chips), dished up by Xenos himself.

Sensing that the people of Koruba don't accept her as their rightful queen, Lara decrees that Cabot, Hupp and Watney must fight to the death in the arena. Before the festivities begin, Xenos asks Lara to drink a "toast to their gods." The mean monarch has come to believe that Xenos is disloyal and thus plots to do him in. When Palance hands Queen Lara her goblet, she in turn stabs him in the gut and tosses her drink over her shoulder. That bit of business taken care of, Lara settles into her chair and orders that the games begin.

In front of a crowd of cheering extras, Cabot, Hupp and Watney must fend off several brigades of fat, scantily clad "warriors" who have clearly seen better days. Of the three, Cabot fares the best, mainly because Urbano's thinly disguised stunt double is doing all the dirty work.

Believe it or not, it is stooge Watney who stops this violent spectacle. In front of everybody, he confesses that Queen Lara killed King Marlenus--not Cabot--and that he, promised mountains of sex, agreed to help her. The citizens of Koruba, delighted to learn that Cabot is every inch the hero they believe him to be, suddenly turn on their queen. In fact, one of Lara's own guards lobs a spear into her gut, killing her instantly. Freedom has returned to Koruba! Huzzah!

Now installed as king, and married to Princess Talena, Cabot relaxes in bed, finishing a bowl of dip. Royal cuddlemate Talena asks what has happened to Watney. King Cabot assures her that the annoying little jerk has indeed been sent packing. Sure enough, there is Watney, still in his mini-toga, back on Earth, wandering around in traffic yelling, "Cabot! Cabot! C'mon Cabot! Where are you?" Later, two police officers drag Watney away--and although the sniveling little jerk is suppose to be in the USA, viewers can clearly see the South African license plates of the cars zooming past. 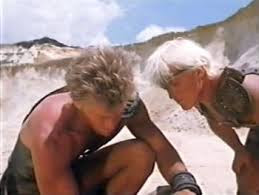 Cabot and friend Hupp plot their next move. Of course, they get captured anyway.

A movie as sublimely stupid as "The Outlaw of Gor" could, in retrospect, ONLY be directed by a fellow who styled himself as John "Bud" Cardos. The only other person who could do an even worse job behind camera would be "Letterman" sidekick Larry "Bud" Melman who is, alas, no longer with us.

The basic conceit of "The Outlaw of Gor" is how a needy, nerdy guy in OUR world can becomes a hunky hero in ANOTHER world (which is similar to the female dream of an ordinary gal discovering she is a secret princess or a regular girl becoming a princess). In our feature presentation, Cabot's geekiness is accomplished by having leading man Urbano wear glasses in the opening scenes. Unfortunately, since our hero is a nice looking fellow and fairly ripped in his own right, attempts to make him look geeky and gawky fall pretty flat. Pal Watney, on the other hand, is every bit as unappealing as the director intended him to be.

The big name in the cast is Jack Palance, here experiencing some serious bad luck in his career. As noted in my earlier post on "The Silver Chalice" (which has only received 8 page views!!), Jack's Xenos character is an exact replica of his Simon the Magician from 1954. Both parts required Palance to wear zany caftans, kooky hats and make those signature pauses he's so famous for. Everything but act, come to think of it. While making "Gor", you have to wonder if Jack was aware of the similarities, too--or if he was just grateful for the check and got on with it.

Which allows us to segue into other aspects of "The Outlaw of Gor" which suggest the filmmakers were not exactly thrilled with their assignment, either.

1) There is some confusion over the main character's name. In the credit list he's called "Tarl", but in the movie Watney calls him "Kevin" twice. 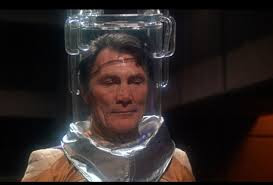 No, Jack Palance doesn't wear this in "The Outlaw of Gor", but it's not any goofier than what he does wear.

2) In the film's first ten minutes, the name "Cabot!" is uttered FIFTY-FIVE!! times (courtesy of IMDb).

3) The men in this movie wear shorter skirts than the women and we are treated to many hinder and/or manly package shots. Whether this was intentional or the film makers just weren't paying attention, who can say, but thanks anyway guys.

4) "Gor" and its sequel "The Outlaw of Gor" were shot simultaneously. How the producers ever thought the world would be crying out for two "Gor" epics is beyond me. Put together, these flicks offer an embarrassment of bad movie riches--provided you have the stomach strong enough to endure them. As for me, I freely admit I need the soothing presence of Mike and the 'bots from "MST3K" to help me through this cinematic sewer. Others clearly agree, because the episode where the gang riffs on "The Outlaw of Gor" is a fan favorite.

In final analysis, Cabot and "The Outlaw of Gor" fits nicely into a genre I call "Super Zeros": men who have big hair, big muscles but little brains; who have vaguely defined powers; and who enjoy strutting around in a G-string or a thong while furthering the cause of freedom and justice. Ator, the star of "Cave Dwellers" and Yor "The Hunter from the Future" are two other examples of this noble breed. I would also pencil in "The Paper Chase Guy" (Robert Ginty) from "Warrior of the Lost World" and The Prince of Space from "The Prince of Space", although these two remain fully clothed at all times.

Therefore, movie lovers, remember it's not the size of a man's loin cloth, but what's inside that counts, and, as always, SAVE THE MOVIES!