Have No Fear! Radar Is Here! 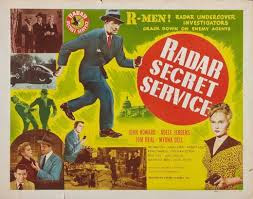 Have you ever wondered what the greatest discovery in the history of mankind is?

Wrong on all counts, movie lovers.

The greatest invention in the history of inventions is radar. 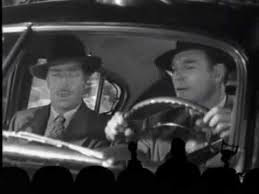 Ever hear of G-Men? Well, these are R-Men! Bill Travis (John Howard) and Static (Ralph Byrd) are agents for the Radar Secret Service--and don't you forget it!

The producers of "Radar Secret Service", that's who!

Released in 1950, produced by Robert "Stock Footage Is My Middle Name" Lippert, directed by Sam Newfield (who gave us "I Accuse My Parents", among other gems), starring no one in particular and featuring more men in suits and fedoras than you can shake a stick at, "Radar Secret Service" relentlessly hammers the theory that without radar, mankind would be lost, utterly lost.

Why, I bet you didn't know that radar can monitor criminals, find stolen goods, uncover hidden mineral deposits, locate icebergs and discover schools of fish fishermen didn't even know about! 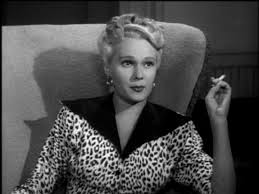 Yes, radar can do all this AND more. Too bad radar couldn't make "Radar Secret Service" a better flick--but if it had, Junk Cinema wouldn't be interested!

Our story begins in Washington, DC, in the offices that house the Radar Secret Service. An elderly gentleman named Mr. Hamilton (Pierre Watkins) is the the boss of the place. His day consists of barging in and out of his office to see what the radar scanners have picked up or barking orders to his underlings. The star agents of the RSS are Bill Travis (John Howard, who looks like Gilbert Roland crossed with Cesare Romero) and Ralph Byrd as "Static". In a scene of gripping intensity, we watch Bill and Static drive aimlessly around country roads using their radar equipment to find the gun "used in the Anderson case." Sure enough, the agents uncover the shooter and the newspaper trumpets their discovery in bold headlines: "Radar Agent Locates Missing Murder Gun." The sub-head reads, "Evidence Clinches Case For Prosecution."

See how valuable radar is? Well, do you?

The action then shifts to a cafe', where blond femme fatale Lila (Adele Jergens) swishes in for lunch. Her waitress is another blond femme fatale called Marge (Myrna Dee). Marge slips Lila a note that a special shipment of uranium is headed their way. Lila, it turns out, is the moll of hood Mickey Moran (Tom Neal), who is part of the gang assembled by hood Michael (Tristam Coffin). Michael plans on ambushing that shipment and, thanks to Lila's inside info, the gang does just that.

Other members of the gang include comic relief Pill Box (Sid Melton), who fusses endlessly about his health, and Blackie. Blackie, see, is in love with waitress Marge. The smitten kittens plan to marry and "blow this town" after Blackie completes the uranium job and collects his pay. Lila, meanwhile, is snuggling with both Mickey and  Michael. 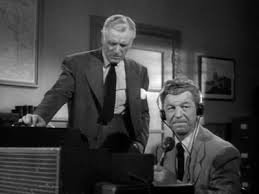 An underling to RSS boss Mr. Hamilton: "My face hurts."

As mentioned earlier, Michael's gang high-jacks the shipment or uranium. However, because of the wonders of radar, Bill and Static are on their tail. Unfortunately, while dumping the bodies of the saps driving the uranium shipment, Blackie is ditched by his partner; he's quickly punched out and arrested by our trusty RSS agents. Because there is no honor among thieves, Michael and the other hoods are happy to let Blackie rot in jail. When Marge pleads with Mickey to spring her fiance', the crumb orders the waitress to button her lip--if she values her and  her cuddlemate's life.

Determined to find that uranium shipment, the RSS agents seek out Marge for questioning. Static enjoys this part of his job because he fancies himself quite a ladies man. Luckily, savvy Marge can handle him.

Static: (leering at Marge as she hands him his menu) "I know what I want."

You tell him, honey! 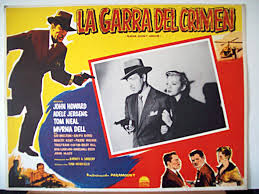 Later, Bill runs into Marge after he's roughed up by one of Michael's goons. He promises to help Blackie if Marge will cooperate with the RSS. "I'll think about it," Marge tersely replies.

By about now, "Radar Secret Service" begins to resemble the John Huston movie "The Asphalt Jungle", the classic crime drama where a bunch of hoods easily pull off a robbery only to start turning on each other...except "Radar Secret Service" isn't very good. Michael's thugs do try to cut each other out of the expected big pay off. Lila continues to play Mickey and Michael off each other. This really gets Mickey's goat. "I want you to comb lover boy out of your hair with a fine tooth comb!" he snarls to his lady love. Blackie continues (unseen) to cool his heels in jail. And Marge continues to keep her own counsel.

Aware that things are dragging a bit, "Radar Secret Service" tries to jump start the flick with a chase scene. Unfortunately, "Radar Secret Service" features what must be the slowest, goofiest, least involving "race against time" EVER. Even though our RSS agents are tracking "a speeding car" carrying uranium and they are flying in a helicopter, the scene is as pokier than grandma at the mall. The audience is treated to endless back-and-forth shots of the hoods driving their car, of the RSS agents following above in their helicopter, another shot of the hoods driving, then another shot of the RSS agents flying their chopper until you want to scream, "I get it! The RSS agents are tailing the hoods! Would you please cut to something else?! Or at least blow up a car?! I don't have all day!"

Later, Mickey (who has been shot) will surprise Michael and Lila at their love nest. That leads to a double cross/shoot out where poor Mickey (who was bleeding to death) bleeds even more to death. Then, just as fun couple Michael and Lila were about to split, Marge barges in packing heat. The plucky waitress backs her prey into a corner...and marches over to the phone to call the cops. She foolishly turns her back for one second, which allows Michael just enough time to clip her with his pistol.

But wait, there's more! Mere seconds after poor Marge takes her slug, RSS agents burst in, arrest everybody and call for an ambulance. Whew! 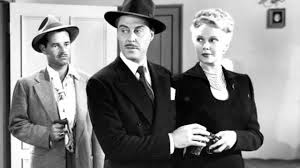 "Shhh, I think my boyfriend is beginning to suspect that I have a boyfriend": Mickey catches Michael and Lila in the act.

"Radar Secret Service"ends with Bill and Static lounging in Mr. Hamilton's office. While their boss puffs on a cigar, the RSS agents congratulate each other on a job well done. "But remember, it wouldn't have happened without radar!" Bill exclaims.

Of course, Junk Cinema is a magnet for unconventional story ideas. After all, who can forget the movie "Dreamer", about a guy who yearns to join the pro bowlers tour? Or "The Little Covered Wagon", a western boasting an all-chimp cast? Or "The Cobweb", a drama set in a mental hospital where all hell breaks loose when the patients want to choose the hospital's new drapes? Honest! These are real movies! So it's easy to see why the producer's hope that "Radar Secret Service" would electrify the country wasn't that far-fetched...for them. 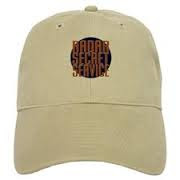 Official hat of the band Radar Secret Service...yes, they're a real group!

So movie lovers, the next time you are at home, snug as bug in a rug, enjoying all the benefits of living in a democracy, take a moment to thank radar, which made every good thing in your life possible.

Good night, God bless and Save The Movies!